Chemicals That Promote Obesity Down the Generations

Diet and exercise are seen as the key factors that cause obesity, but new research suggests that certain chemicals called obesogens contribute to the global weight problem. Bruce Blumberg, professor of developmental and cell biology at the University of California at Irvine tells host Steve Curwood that the effects of an obesogenic chemical he studied seem to persist for several generations.

CURWOOD: From the Jennifer and Ted Stanley Studios in Boston, this is Living on Earth. I'm Steve Curwood.

Conventional wisdom says over-eating and the lack of exercise are behind the obesity epidemic in America and much of the world. But that’s not the whole story, according to some new research from the University of California, Irvine, that implicates certain chemicals called "obesogens". Here's Professor Bruce Blumberg.

CURWOOD: Bruce Blumberg is a professor of developmental biology at UC Irvine. And here’s the startling part of his research. Not only has his team confirmed earlier work showing that certain persistent organic pollutants can act as obesogens, they’ve also found that initial exposures can echo down through at least three generations to make animals fat. This study used the chemical TBT – tributyltin – which was widely used as anti-fouling paint until a few years ago.

BLUMBERG: So we exposed pregnant mice to very low doses of tributyltin, and we knew from our previous work that would give us an effect on the babies that were so exposed - that would be - we would call that the F-1 generation. And we asked the question what happens if we bred those babies and the babies of those babies and checked whether there were subsequent effects.

CURWOOD: And what happened?

CURWOOD: So how much fatter were these animals compared to your controls?

BLUMBERG: It depends on which part of fat we looked at. So the effect on fat on different parts of the body was different, but some of the so-called fat depots were twice as big. Overall, the animals were probably about 15 percent fatter.

CURWOOD: Now this study is lab mice, how well do you think these findings might translate to humans?

BLUMBERG: The reason I say that is because tributyltin - TBT - works through a hormone receptor called PPAR gamma. And we know there are pharmaceutical drugs that target that same receptor that make people fat. So if I have a chemical tributyltin that activates the same receptor, you would expect the same effect.

CURWOOD: So walk me through the actual physiological process of how a chemical like tributyltin works to become an obesogen.

BLUMBERG: So as much as we know about tributyltin, it activates this hormone receptor PPAR gamma, and PPAR gamma works as a...it has a partner. So it works as a dimer. It has two parts. And the other part of that is called RXR, retinoic X receptor. So if TBT happens to get into a stem cell, and PPAR RXR gamma is there, it activates that complex, and it turns on a set of genes that cause the cell to become a fat cell. And along with that comes the ability to store lipids, to store fats. If PPAR gamma is not there, that stem cell will become a bone cell.

CURWOOD: One of the most startling things that’s in your report is your citation of a study that showed eight different species of animals including pets, laboratory animals, and feral rats, living in proximity to humans have become obese in parallel with the human obesity epidemic. And the odds of this being a coincidence was something like 10 million to 1 against. 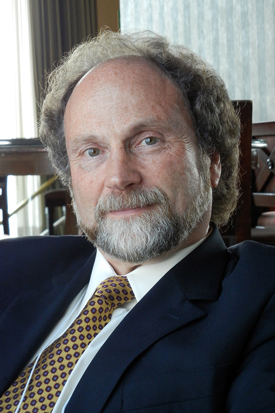 CURWOOD: So what does that mean in your eyes about the human obesity epidemic?

BLUMBERG: You can make the argument, if you talk to...the mainstream obesity community will make the argument that it’s all about diet and exercise, calories in and calories out. And I don’t see how you can explain the increase in obesity of animals, including wild animals, by calories in and calories out. It’s got to be something else. It has to be the nature of the calories. It has to be a chemical, an environmental factor, to which they’re exposed to now, that they were not previously exposed to, that underlies that.

CURWOOD: So who’s most susceptible to tributyltin exposure?

CURWOOD: So Professor Blumberg, tell me - that I might need a couple notches on my belt - maybe I could blame on my mother or grandmother?

BLUMBERG: I don’t know if you could blame it on them. What your mother or grandmother was exposed to will affect the efficiency with which you handle calories. It’s well known that obese people have more efficient metabolisms. They store a higher proportion of the calories that they eat. Obviously, they do eat more, but they also store more of every calorie that they eat as fat, compared to non-obese people, so that’s an example of what we call metabolic programming.

CURWOOD: So what does that say now thinking of our social policy in dealing with human health and obesity?

BLUMBERG: It says to me that the most important way that we can change obesity is not by treating obese people, but by preventing them from becoming obese in the first place, by preventing these exposures, which can include chemical exposures, but it can also include exposures to improper diet. There’s a fair bit of data that says exposing mom to a high fat or junk food diet makes the babies prefer that kind of food. There’s some kind of a programming event that’s not well understood that’s going on there. So it’s not just chemical exposures. Chemical exposures and dietary factors, and the nature of diet early in life, is the area that needs to be addressed to make inroads into solving this obesity problem that we face today.

CURWOOD: And what about the folks who are already chubby?

BLUMBERG: Well, it doesn’t mean that we shouldn’t help them, but I think that we’re better off preventing them from becoming chubby. You know, there’s a lot of data out there that suggests that 90 percent of people who lose even a significant amount of weight will gain it back. That’s also a very important factor here. Imagine you’re a person who has worked very hard; you’ve dieted hard; you’ve exercised hard; you’ve lost 150 pounds. You look and feel better than you ever have in your life. Why is it a 90 percent probability that you gain that weight back?

CURWOOD: And the answer is?

BLUMBERG: The answer is to me that it’s not strictly behavior. It’s a metabolic programming, that your body is programmed to behave in a certain way, by your early life experiences, and that it’s very difficult to fight that.

CURWOOD: Dr. Bruce Blumberg is a professor of developmental and cell biology at the University of California Irvine. Thank you very much professor.

BLUMBERG: You’re welcome. It was a pleasure.