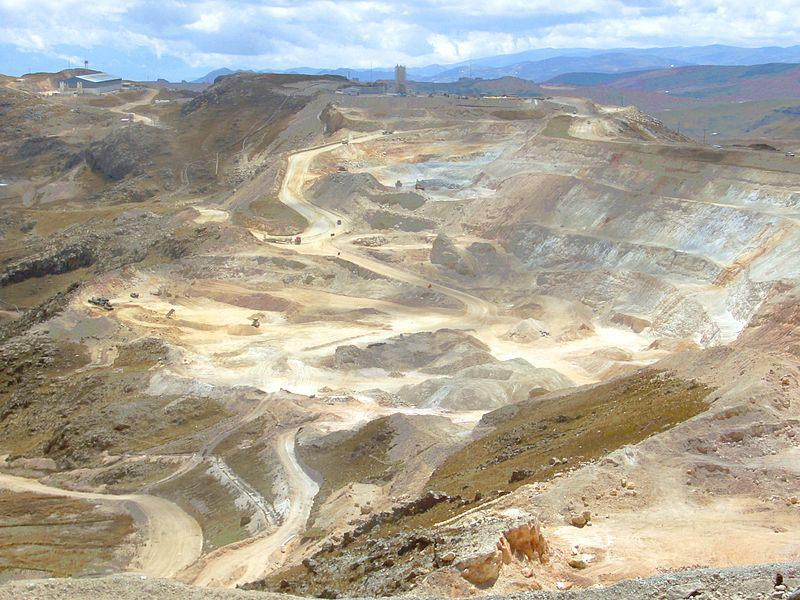 As the price of gold continues to rise, mining smaller deposits can be very lucrative. Magazine On Earth writer George Black tells host Steve Curwood that in developing countries like Peru, rules are lax and environmentally destructive gold extraction is booming.

CURWOOD: The price of gold has increased dramatically in recent years - investors see it as a hedge and the growing middle class in Asia has a seemingly insatiable demand for the shiny yellow metal. So there’s a boom in gold mining, especially in the developing world, where, from the Congo to the Amazon, regulation of the toxic chemicals involved is weak.

George Black is executive editor of the magazine On Earth, published by the Natural Resources Defense Council. He recently wrote about the largest gold mine in South America in the Peruvian Andes and he joins me to talk about it - hello there George!

BLACK: Good day Steve, it's very nice of you to have me on your show.

CURWOOD: So, please describe for us this area of Peru, where the mine is and the natural environment there.

BLACK: This is at a very high altitude in northern Peru. It’s fairly arid, actually, it reminded me a lot of the Scottish Highlands, except 10,000 feet higher. So you’re talking about a mine that is between 12 and 14 thousand feet above sea level. And it covers, if you can believe this, 60 square miles that’s called Yanacocha, it produces more than a million ounces of gold a year, which makes it the biggest in South America and one of the biggest in the world. And the plan now is to open another mine called Conga right next to it, which would produce both gold and copper, which commonly occur together.

CURWOOD: So, in your article, in the magazine On Earth, you write that the days of a miner panning for gold on a river and coming up with a shiny nugget are over. They’re after much smaller amounts of gold, flecks of gold, in Peru. How do they get the gold from the Earth around it? 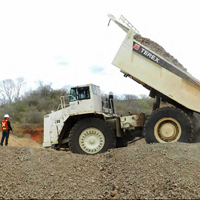 BLACK: That’s really the problem and it’s why these mines have grown so enormous. What you have now is literally fractions of an ounce of gold for every ton of rock. And what that means is that the rock is crushed into small, pebble-sized chunks. You pile those into mountains that can be hundreds and hundreds of feet high and then you snake pipes up the size filled with cyanide, sodium cyanide solution, and that drips down through the rock in a process that can take months. And cyanide has the property of being able to coalesce the fragments of gold into a sort of slurry that then collects in a pit at the bottom, and then that is processed and purified and then turned into gold ingots.

To use heap leach mining workers make huge piles of rubble extracted from the ground and spray it with cyanide to amalgamate gold. (Securities and Exchange Council)

CURWOOD: Huh. Cyanide doesn’t sound like the most healthy stuff.

BLACK: Well, cyanide is of course notorious because it has so many morbid associations for us. It’s what the Nazis used with Zyklon B. It’s a horrendous chemical when it escapes into the environment. So the first thing that you have to worry about with a large gold mine is the residue of this cyanide that is stored in huge tailings pits. If one of those tailing pits leaks or is flooded, for example, the results can be catastrophic. We saw one, which some people remember, about 10 years ago in Romania, where a tailings dam ruptured and hundreds of miles of the Danube were affected and all life in that stretch of the river was wiped out. So, yeah, a cyanide spill can be catastrophic.

CURWOOD: What environmental effects, if any, have resulted from this mining operation in Peru?

BLACK: Well, a number of effects. The most serious was in the year 2000, when a truck carrying 300 odd pounds of mercury, which is a byproduct of gold mining, spilled on the streets of a small peasant village. And people didn’t know what mercury was, so they ran into the streets, the kids scooped it up in their bare hands to play with it, families took it home in jars to put on their shelves and admire and show their neighbors and hundreds of people got sick. 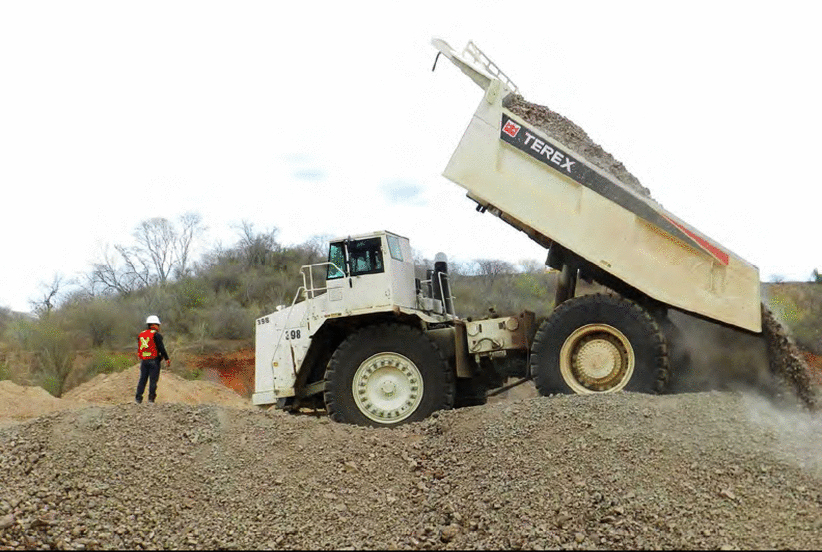 The second thing is a series of spills of heavy metals and arsenic into local streams, wiping out the fish life. There are also all sorts of public health issues that have never been systematically studied because a place like Peru doesn’t have the same kind of public heath epidemiological capacity that we do. So it’s a little bit like fracking here in a sense, that a lot of people get mysteriously sick; they have skin diseases. They have Pink eye, they have respiratory diseases, they have asthma problems and it hasn’t been conclusively proven, of course, that this is due to the mine. But what’s really significant is the buildup of these things just has bred 20 years of extreme mistrust, so people here are extremely nervous at the prospect of another mine opening.

CURWOOD: Tell me about the opposition to this mine. I understand that the people who live in this community are predominately indigenous, don’t want to see expansion there, and that the protests have gotten rather intense.

BLACK: Yes, they have become very intense. In fact, coincidentally when I was there this summer, the protest that had been simmering for about a year really erupted. We were detained and interrogated by mine security people. We were then, ironically enough, detained and interrogated by some local peasants who were basically threatening to assault anyone who was associated with the mine and we’d just come from there.

We got back to town that night, the town of Cajamarcha, and there had been riots all day…five people had been killed, we were tear-gassed. It was a very disturbed situation and a state of emergency was imposed. But this is increasingly typical. There had been three major incidents in Peru alone in the last year or two where people had been killed in violent demonstrations in three different parts of the country.

CURWOOD: What’s the livelihood of the people who live around this mine in Peru?

BLACK: The mining area around the town of Cajamarcha is basically a traditional peasant economy based on livestock, largely. It’s a famous dairy center, lots of local cheeses, dairy products, a certain amount of agriculture, things like pigeon peas and wheat. What people mainly depend on in agriculture, of course, is water, and the main threat that comes from a big mine is the colossal amount of water that it uses to dilute the cyanide that is needs to extract the gold. So there’s a constant threat on these people’s water supply, which is probably the single thing that makes them angriest.

For Peruvians building a reservoir of water is not the same as a natural lake. (Wikimedia Commons)

CURWOOD: Is it the volume of water that they’re worried about, the poisoning of the water, or both?

BLACK: It’s both. And more than that I would say it’s the symbolic value of that water. You know, the company’s response will be: OK, we’re going to drain four of your lakes to create toxic tailing pits and to dump the waste rock and to get at the gold at the bottom of the lakes. But don’t worry, we’ll build these reservoirs. And to a peasant in the Peruvian highlands, a reservoir is not the same as a lake.

They’ll take you around these lakes and they’ll tell you all the sacred legends of their ancestors that are attached to these places. So, one side measures water in terms of cubic feet and gallons and acreage of cement, and for the other side, these places have an absolutely different meaning. And in a sense, that cultural conflict is very deep and maybe irreconcilable.

CURWOOD: George Black is Executive Editor of the magazine On Earth. Thank you so much, George. 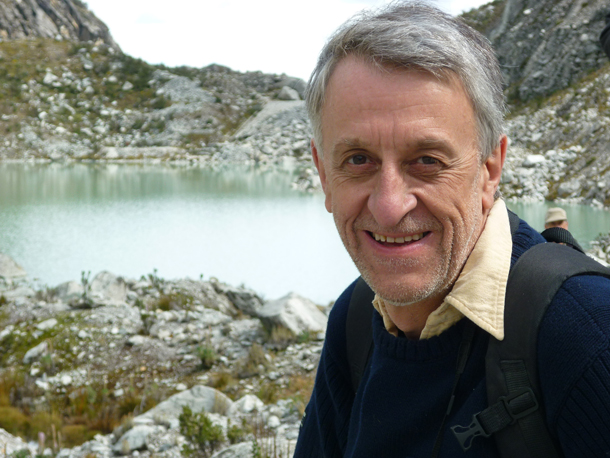 BLACK: Thank you so much, Steve - it's been a pleasure.