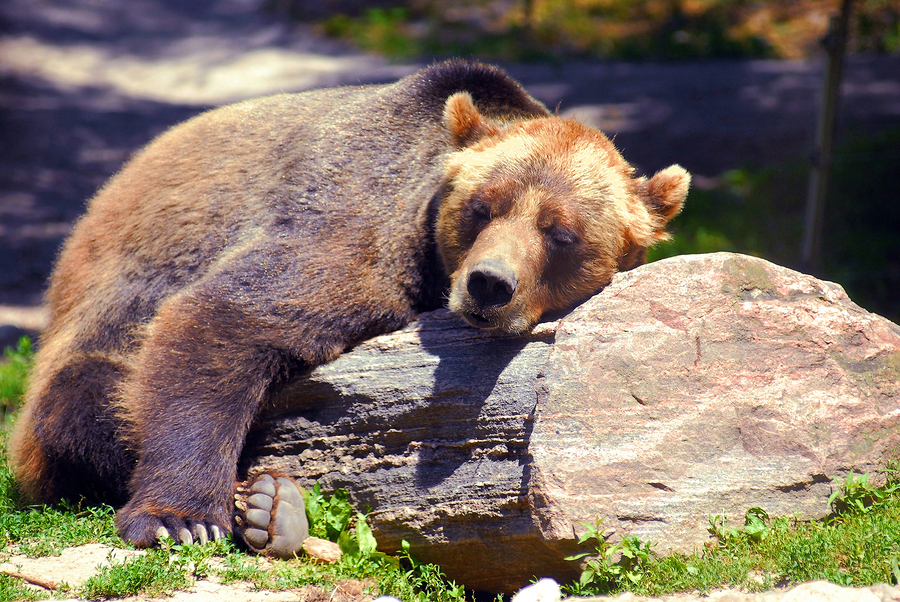 A bear takes a nap on a sunny rock. (Bigstockphoto.com)

Guest zoologist Donna Fernandes tells host Steve Curwood about some of the various ways animals prepare for, adapt to and spend the cold, dark winter months.

CURWOOD: It's Living On Earth, I'm Steve Curwood. We return now to the final segment of our encore presentation, a live program, recorded at WGBH, Boston.

CURWOOD: Donna, you're a zoologist. Tell me: do ants and bears really dance?

FERNANDES: Well, I must admit, ants and bears aren't known for their dancing abilities as much as some other species. Honeybees dance to communicate food to other members of their hive, and there are very elaborate courtship dances in a number of bird species and even scorpions do somewhat of a waltz during mating. So there are species who are better dancers than bears and ants.

CURWOOD: But they do get ready for the cold, dark winter.

FERNANDES: Well, in response to decreasing day length or shortening days and colder temperatures, animals in this area adopt one of 3 strategies. They can migrate, just leave the area completely; hibernate; or they can develop certain characteristics that make them able to resist the cold much better.

CURWOOD: Mm, let's start with hibernation. I want to try that right now. In fact, I really wished I could have stayed in bed this morning. I want to sleep longer. So in honor of our bear, maybe we could talk about that.

FERNANDES: Right. In the winter, I think all of us hate getting out of bed. It's often still dark out. That cold floor to put your feet on in the morning isn't very comfortable. We may sleep a little longer, but bears really sleep the whole winter away. They spend about 100 days in their den without eating anything, in a sort of semi-sleeping state. And not only do they not eat, but they lower their body temperature by several degrees, and their metabolic rate decreases to about half the normal rate.

CURWOOD: Wow. So why do this? I mean, what's the advantage of such changes?

FERNANDES: Well, by lowering your body temperature and your metabolic rate, you can get by with a lot fewer calories, so they can burn up that stored fat much more slowly. And this is the only way they can survive without eating, because there really isn't much to eat for a bear during the winter months.

CURWOOD: Uh huh. It's a diet plan in other words.

CURWOOD: But, I mean, are they really hibernating? I mean, you're not supposed to go near a hibernating bear, right?

FERNANDES: Right. They are still capable of a certain amount of coordinated body movements. So if you do disturb a sleeping bear, they will wake up and they can retreat or attack. There are other animals which are what are called true hibernators or deep hibernators, and they go into a completely comatose state. Things like a lot of our rodents from around here, ground squirrels, chipmunks, prairie dogs, those kinds of things. They'll lower their body temperature to just a few degrees above freezing. So if you find one it will be very cold to the touch. And their metabolic rate is about 10% of normal rate. Something like the Arctic ground squirrel, the heart rate goes from about 100 to 200 beats per minute to 10 to 20 beats per minute, and breathing goes from about 100 breaths per minute down to 4 breaths per minute. So they're in a very slumber-like, slow, frozen state.

CURWOOD: Of course, now, this time of year I do like to sleep late, but I even prefer to go, like, south, you know, Florida, Caribbean, you know, something like that. It's even better, right?

FERNANDES: Well, migration's a very common strategy, particularly among our birds. In this part of the world, in the United States and Canada, fully two thirds of the birds that breed here migrate south for the winter, either to our southern states, Mexico, or Central or South America. And probably some of the most remarkable things are the distances that they travel.

FERNANDES: Well, the Arctic tern is the most famous. They breed in the Arctic Circle during the summer months, and then when winter approaches they fly all the way down to Antarctica and then back again in the spring. It's a round trip of 22,000 miles. By doing this they actually spend about 9 months of their time in perpetual light. So they're probably the one animal that would have argued on the case of light in that previous story. They like a lot of light. But even things as small as the monarch butterfly, which weighs about 1/100th of an ounce, they've been tagged in Canada and found to fly all the way down to Mexico for the wintering site, a distance of about 2,000 miles. 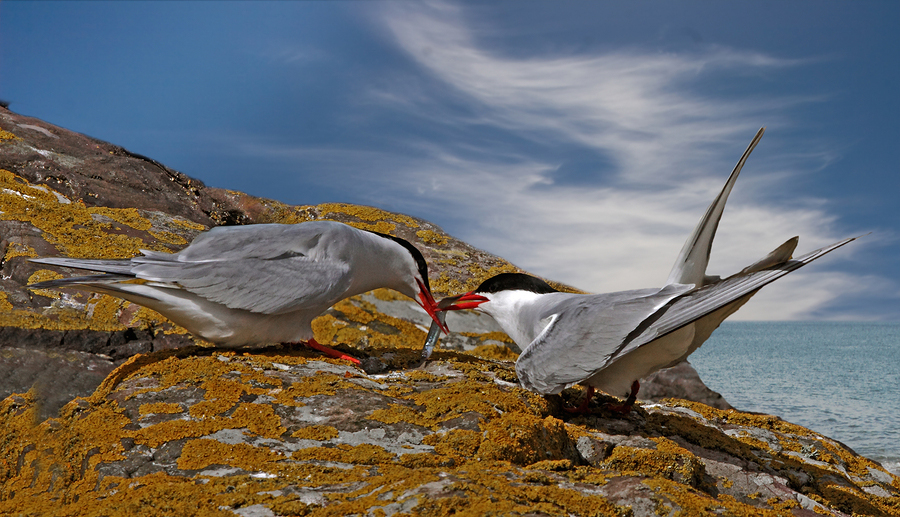 CURWOOD: Now aside from the birds and these butterflies, who else likes to migrate in the animal kingdom?

FERNANDES: Well, certain bats will migrate, and some of our larger mammals like caribou or reindeer. And in the past we had huge herds of bison or American buffalo, and they used to migrate great distances. And probably a very well known group is whales, who will migrate from north to south in the winter.

FERNANDES: Right. Things like fish that live in ponds really can't migrate, or a lot of small aquatic invertebrates or toads and things. They have -- the biggest problem they face is how to avoid freezing, since they really can't go anywhere. They produce a certain chemical in their blood called glycerol, which is much like antifreeze. And what it does is it lowers the freezing temperature of their body tissues, which is composed primarily of water. And by having antifreeze or this glycerol in their body, their cells won't burst. Much like you put antifreeze in your car radiator so your radiator fluid doesn't freeze over.

CURWOOD: And finally, like so many of us, I guess that the animals really do pack it on in the winter. They don't have the diet plan of the bear, though.

FERNANDES: Right. Another strategy is better insulation. You can do that through a thicker fur coat, which a lot of mammals do get a thicker winter coat. Or you can do it by a thicker layer of fat, which provides insulation and so aquatic mammals, which don't have much fur, get that layer of blubber. I think in humans, though, we gain weight not because we want greater insulation as we're trying to -- we're escaping the release of having to look good in a bathing suit. So I think we allow ourselves to get a little heavier in the winter because we don't have to look so good any more.