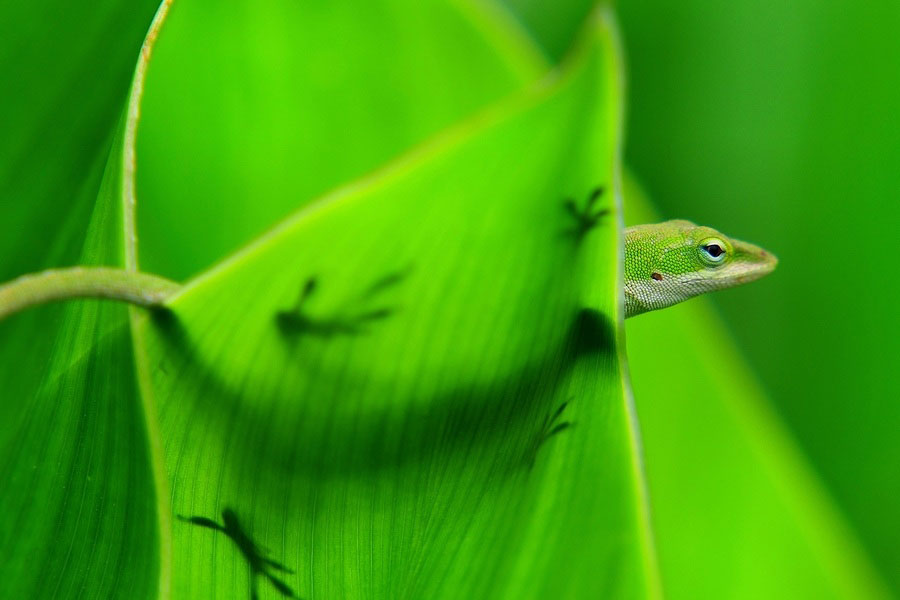 An Anole Lizard, partially hidden behind a leaf. (Bigstockphoto.com)

Creatures come in all shapes and sizes - and in the case of some lizards called Anoles, where they live is the key to the form they take. Ari Daniel Shapiro reports.

CURWOOD: One of the most powerful pieces of evidence that helped Charles Darwin formulate his theory of evolution was the way species changed when isolated on different islands. In Darwin's case, it was finches - but as Ari Daniel Shapiro reports, the same kinds of changes can be found among species of lizards in different parts of the Americas.

SHAPIRO: Rosario Castañeda can’t get her 1‐gallon jar to open.
Do you want me to help?

SHAPIRO: The jar’s brimming with ethanol. And submerged in that preservative are half a dozen lizards the size of turkey basters. They’re called anoles. And in this story, we’re going to use anoles to talk about eco‐morphology – that is, the relationship between how organisms use their environment and the way their bodies have evolved.

CASTAÑEDA: Let’s get one of these out.

[SOUND OF FORCEPS AGAINST GLASS]

SHAPIRO: Castañeda – an evolutionary biologist here at Harvard’s Museum of Comparative Zoology – uses a pair of long tweezers to pull an anole out of the ethanol. She has the preserved anole by the belly. The lizard’s a dark chocolate brown. It came all the way from Cuba, where it lived up in the forest canopy.

CASTAÑEDA: They can actually move into, like, really small branches proportional to their body size. The other thing is that they have these really large heads. They eat larger prey and harder prey as well.

CASTAÑEDA: Beetles, things that are a little bit crunchier.

SHAPIRO: This anole belongs to a species called Anolis equestris

SHAPIRO: Then Castañeda pops open a much smaller jar, which contains Anolis occultus, from Puerto Rico. It’s tiny – about the size of a twig. Which is no coincidence. Occultus lives on small twigs, and they’re masters of camouflage.

CASTAÑEDA: Like when you see them in the field, you have to look really hard to make sure that this is not a twig. And they stay still so perfectly that you’d have to wait to see them move and really realize there’s a lizard there. 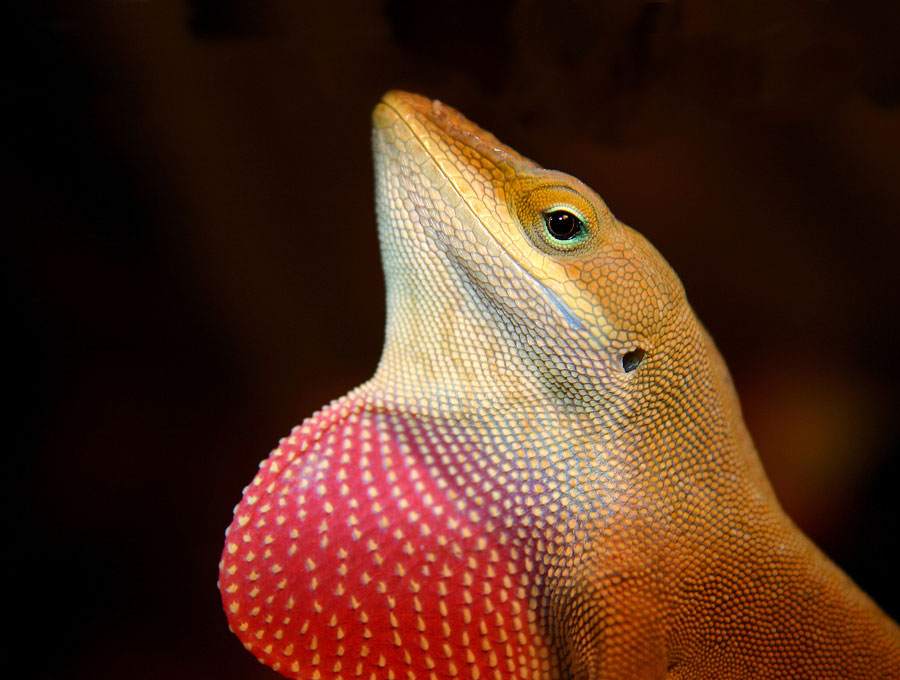 The profile of an Anole Lizard. (Bigstockphoto.com)

SHAPIRO: Castañeda leads me into the anole collection at the museum. The shelves are filled with jars of anoles of all shapes and sizes. Many of these specimens come from the Caribbean where you find not just big anoles like equestris in the forest canopy and little ones like occultus clinging to tree twigs, but also mid‐sized ones living only on the trunks of trees, and others that split their time, scuttling between the base of the trunk and the forest floor and nowhere else.

CASTAÑEDA: So you have a huge diversity in what would look at the beginning as a single habitat.

SHAPIRO: Namely, a single tree. But for an anole, a tree’s made up of half a dozen different micro‐habitats, and the various types of anoles have adapted accordingly, over and over again. Take the big anoles. They scamper about the forest canopies on all the Caribbean islands – Cuba, Puerto Rico, Jamaica, Hispaniola – but they’re not the same anole.

Each island has a different species of big anole up in the canopy. And each island has a different species of little anole on the twigs. And so on. The anoles have repeatedly evolved in more or less the same way throughout the Caribbean, on every island. It’s an example of eco‐ morphology. Again, that’s where a variety of habitats reliably produce the same spectrum of body shapes.

Castañeda studies anoles in South America. She’s looking for a pattern, maybe one that’s similar to the Caribbean. The first step was establishing who’s related to who. So she set out to collect anole DNA. She always collected at night. Unlike in the Caribbean where you can’t help but see lizards.

SHAPIRO: In South America, there are far fewer.

CASTAÑEDA: During the day, you will hardly see them. So it would be easier to go at night because at night they sleep over leaves. So when you flash them with the light, they look whitish over the background of the green leaf.

SHAPIRO: Then she moves a little loop on the end of a fishing rod into position.

CASTAÑEDA: Then you’ll pass the loop around the head of the lizard, then you’ll grab your lizard.

SHAPIRO: Through the DNA work, Castañeda’s found that within each species of anole in South America, there can be a lot of physical variation.

CASTAÑEDA: Variations in size, the number of scales, and coloration.

SHAPIRO: Now she’s moved on to measuring the anoles – the length of their bodies and their legs, for example. She’ll try to match those characteristics with their habitats and see if there’s any evidence for eco‐morphology. But already things look different than the Caribbean. She’s found South American anoles living near water, or on boulders and rocks – and they don’t match anything that’s been reported before. Even the ones living in the trees look different.

CASTAÑEDA: Species that you would expect would have longer tails, they have shorter tails, or things like that.

SHAPIRO: Any one of a number of reasons could have steered anole evolution in a different direction on the South American mainland. Maybe the snakes and birds snacking on the anoles attack differently. Or maybe the habitats are just plain different. Castañeda spends half her time working her way through this puzzle.

The rest of the time she earns her keep as a fellow for the Encyclopedia of Life – a website that devotes a separate webpage to every creature on the planet. And it supports this series, by the way. Castañeda’s in charge of the anole pages.

CASTAÑEDA: The idea is to get people to compile high quality data on species. So you know that whatever you’re reading on Encylcopedia of Life, somebody that really knows about the topic is writing that.

SHAPIRO: Castañeda is working on all the anole species.

SHAPIRO: As for how many she’s done?

[MUSIC: David Crosby “Cowboy Movie” from if I Could Only remember My Name (Atlantic Records 1971).]

CURWOOD: Our story about the Anoles was reported by Ari Daniel Shapiro for the series “One Species at a Time.” It’s produced by Atlantic Public Media, with support from The Encyclopedia of Life. Check out the pictures at our website loe dot org.


One Species at a Time- Anoles