How Safe is Your Nuclear Power Plant?

GELLERMAN: It's Living on Earth. I'm Bruce Gellerman. It’s been nearly a year since the six reactors at Japan’s Fukushima nuclear power plant were hit by a devastating earthquake and tsunami tidal waves. Now, a new Japanese study reveals that in the confusion that followed, government officials considered evacuating Tokyo.

After the Japanese disaster, the U.S. Nuclear Regulatory Commission investigated the safety of our reactors. They all passed, but the NRC reports that last year there were 15 significant safety lapses at U.S. nuclear power plants.

The Union of Concerned Scientists studied those safety lapses and the NRC's response to them. David Lochbaum, director of the group's Nuclear Safety Project, says while no one was injured, there were some "near misses."

LOCHBAUM: ‘Near miss’ is our term for the times when an event or discovery at a U.S. nuclear power plant caused the Nuclear Regulatory Commission to send a team out to understand what happened and why. One other aspect of a near miss is that the NRC only sends those teams out when that event or discovery could increase the likelihood of core damage or core meltdown by a factor of ten or more. And last year, there were 15 near misses.

GELLERMAN: So, a near miss is nearly disaster!

LOCHBAUM: Well, it’s a couple steps down a road that nobody wants to get to the destination of.

GELLERMAN: Now, you’ve reviewed these near misses and you’ve said that at least on three occasions, the NRC did a pretty good job.

LOCHBAUM: Yes, the NRC did an extremely good job – the best example would be the Fort Calhoun plant in Nebraska where the NRC inspector found that its flooding protection wasn’t good enough, made the owner fix those problems and, just a few months later, the Mississippi River flooded and made that plant an island for a short period of time. So, the NRC’s efforts months earlier made that plant ready for the act of nature it experienced.

GELLERMAN: On the other hand, there’s some very serious incidents, as you say.

LOCHBAUM: It’s a yin and yang or good and bad, as you say. On the other side of the coin, the NRC is tolerating some problems. There’s roughly half of the fleet of U.S. plants don’t meet fire protection regulations. About a quarter of the plants have seismic hazards or earthquake hazards greater than they’re designed to withstand, so we have to do something about the known hazards because they’re going to hurt us someday.

GELLERMAN: Now, when you say they don't meet the fire protection standards, the NRC acknowledges that?

LOCHBAUM: Yes, the NRC acknowledges that. They have a list of the 47, we use their list. Those owners have made promises and plans to come into compliance sometime over the next decade or so, but that pace is good as long as they don’t have a fire. It’s bad if they ever experience a fire.

GELLERMAN: What about the earthquake risk? You say that there are 27 plants allowed to operate with seismic protection levels that were inadequate?

LOCHBAUM: Yeah, Entergy had four of the 15 near misses, far more than their fair share. The NRC looked at those four individually but they didn’t step back to see if there was a corporate hand at play in those problems. You know, is the company not providing enough resources. Do they not establish high enough standards? Or are they just not following through?

But the NRC never asks and answers those questions. So we felt that’s of the things the NRC should do when they see one company having a particularly bad year – connect the dots to see if its just coincidence or if there’s some common theme that’s causing those problems to manifest themselves over and over.

GELLERMAN: One of the plants that Entergy owns actually is not far from where I’m sitting right now. It’s the Pilgrim power plant just south of Boston. Seems to me from reading your report they had a very serious incident.

LOCHBAUM: They and a similar event at the Millstone plant in Connecticut were the two near misses that troubled me the most. What happened at Pilgrim was in April of 2011, they were restarting from a refueling outage, very common activity that’s practiced in control room simulators and in the plant routinely. 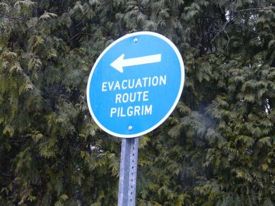 That’s a hundred ton mass of nuclear uranium and plutonium that’s power level is doubling every 20 seconds. At some point, they tilted the machine, basically, and it automatically shut down. What troubles us about that is it’s good that the protective system stepped in and took the operators out of the game and shut the reactor down. But these are the operators who are supposed to protect workers and the public in event of an accident. If they can’t walk and chew gum, we’re not confident that they’re going to be able to run and juggle like they’d need to do to respond as necessary during an accident.

GELLERMAN: Now, the NRC is considering re-licensing Pilgrim. It’s been operating for 40 years, it wants to go on for another 20 years. Does the NRC consider this incident in reviewing the re-licensing application?

LOCHBAUM: The NRC reviewed this event separately from that procedure. The NRC was not happy with the performance at Pilgrim. Basically, they used up their get-out-of- jail-free card. If they do anything like that again in the next year or so they face serious consequences. So, they sent the right message based on what happened, and that seems like it got the company’s attention.

GELLERMAN: Now, as I understand it, 70 of our nuclear reactors have gotten re-licensed for another 20 years. Not a single one has been denied.

LOCHBAUM: That is correct. To be fair to the Nuclear Regulatory Commission, while they’ve never denied an application, they have said ‘not yet’ quite frequently, which then requires the plant owners to go back do more homework, commit more measures in order get the NRC’S concurrence at the end of the day. So while they have never denied a petition, they have required plant owners to supplement them extensively to satisfy the NRC.

GELLERMAN: The NRC, I guess, saw your report and they say there’s nothing new here.

LOCHBAUM: Unfortunately, that’s true; those plants have been out of compliance for many, many years. So, what would be new would be to have the NRC make those plants comply with the regulations and, if so, we’ll record that in next year’s report.

GELLERMAN: Well, David Lochbaum, thank you so very much.

LOCHBAUM: Thank you, Bruce. Appreciate it.

Before and after photos from Fukushima