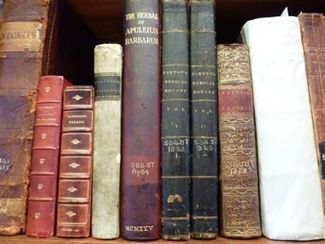 The technological revolution has led to a big change in how books are published â€“ and read. But this isnâ€™t the first time the nature of books has changed. In fact, looking back some five hundred years ago, books about plants and herbs underwent a revolution. Producer Laurie Sanders visited Smith Collegeâ€™s Rare Book Room to dig into botanical literature.

GELLERMAN: This year spring will have officially sprung at precisely 7:21 pm eastern daylight time, on March the 20th. It's the equinox. And all things being equal, in the northern hemisphere, it's a time for gardeners to green thumb through catalogues and dream of plots to plant the season. Nothing new under the sun there, for it was back in the 15th century that the first botanical books were printed and began sowing inspiration. Producer Laurie Sanders digs back into their roots.

SANDERS: There are hundreds of books on the market about plants: identification guides, gardening manuals, wild plant medicinal handbooks. Here at Smith College, in the Rare Book Room, you can get a glimpse at how todayâ€™s plant books evolved by studying their predecessors.

SANDERS: The collegeâ€™s collection includes some of the worldâ€™s earliest botanical books, known in their day as herbals.

ANTONETTI: In this case, we have the early printed books, books printed before 1500.

SANDERS: Martin Antonetti is the director of the Rare Book Room at Smith College.

ANTONETTI: Now weâ€™re looking for the herbal by Leonard Fuchs. Here it is. It is big and heavy.

SANDERS: In a few minutes, Antonetti and his colleague, John Burk, a professor of botany here at Smith, have pulled out half a dozen botanical books. Burk says these few books tell the story of how botanical illustration and literature changed and developed over a 1,500-year period. He picks up the oldest one, which was printed in 1454.

BURK: The printing press was invented in 1450, I believe, so this is one of the books from the first 50 years of printing. It has taken what were medieval drawings and transcribed these on to woodcuts and then used them to illustrate text here. Itâ€™s interesting as I just look through here, this is a drawing of a lily for example, and I think, you know, knowing a lily, you know, you can pretty much see what that is.

SANDERS: The drawings are very simple, almost cartoonish. Antonetti says thatâ€™s because in the 1500s, scholars were still relying on ancient texts as authorities. In the case of this particular book, the text was first written in 50 AD by an herbalist named Dioscorides. Antonetti says the original work never left circulation, but was hand-copied until the printing press was invented.

ANTONETTI: That explains why the illustrations are so schematic because they have been copied over and over and over again for those 1400 years. And over time, all of the detail, whatever there was in Dioscoridesâ€™ original pictures, has been stripped out. But this is the last period in which this occurs. Soon after that, everything changes.

SANDERS: The period we now know as the Renaissance was beginning. Art, culture, and science were transformed. And people who were writing herbals began to study the natural world firsthand, relying on close, personal observation rather than copying the work of somebody else.

ANTONETTI: These are real plants drawn from nature. Somebody has dug up the plant, and they have dug them up because you can see the roots. And what they actually do is make a watercolor painting of this and then transcribe that to the woodcut. And just look at this borage plant, which has actually the little hairs on the leaf of the borage. And he depicts this extremely well.

SANDERS: Aside from the extraordinary detail in the Brunfels herbal, the illustrations also, for the first time, show different stages of the plantâ€™s life. There are flowers and fruits in the same drawing, sometimes even with dead or dying leaves. And during the next two decades, there are other important changes.

SANDERS: The next herbal Burk leafs through includes similarly detailed plant illustrations, but now some of the drawings have been accurately colored - handpainted by professional watercolor artists. And the herbalist, Leonard Fuchs, included plants from the New World.

ANTONETTI: The Fuchs herbal is the first in which we start seeing plants that have actually come into cultivation since 1492 - plants that have been brought to Europe and have begun to spread. This is famous because it has the first drawings of Zea mays, what we call corn.

SANDERS: During the 16th century, interest in herbals and in fact all aspects of science flourished. Authors wrote not in Latin but in their native languages. In 1597 the first herbal in English was published. Each plant had a section called â€œvirtues,â€ which described what could be done with the root or the flower, or what happened if you boiled it or ate the seeds.

BURK: Iâ€™m just off the top of my head looking at hops. And he said, â€œthe many virtues of hops do manifestly argue the wholesomeness of beer above ale. For the hops rather make it a physical drink to keep the body in health rather than an ordinary drink for the quenching of our thirst.â€ Rather nice ideas here.

SANDERS: Among those relying on the Gerard herbal were members of the Jamestown colony, and later the Puritans who settled in New England. But by the end of the 1700s, the age of the great herbals was over. Plant books were no longer huge compendiums, but focused on specific topics: plants and medicine, plant taxonomy, agriculture. Antonetti says there were also whole new fields of interest that developed.

ANTONETTI: After the age of the great herbal, you have the development of another genre of book dealing with plants, with flowers in particular, called floreography, which is what we call the language of flowers: illustrations of flowers and then descriptions of their emotional meanings. So if I were to give you a petunia, what would I really be saying to you? (Laughs.)

SANDERS: Considering a gift of petunias can mean anger or resentment, Iâ€™m glad he held off. For Living on Earth, Iâ€™m Laurie Sanders.

GELLERMAN: For a slide show of illustrations from Smith College's rare botanical books and herbals - dig a path to our web site loe dot org.