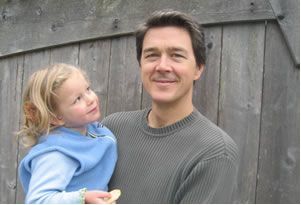 Mark Hertsgaard with his daughter, Chiara, a member of what he calls, â€œgeneration hot.â€ (Photograph by Francesca Vietor, Courtesy of Houghton Mifflin Harcourt)

Scientists predict that the next fifty years will bring pretty serious climate change. While itâ€™s difficult to imagine our world that far in the future, author Mark Hertsgaard, in his new book, Hot, perceives those threats as dangers to the well-being of his young daughter. Living on Earthâ€™s Steve Curwood speaks with him about focusing the power of parents towards climate-action.

GELLERMAN: Itâ€™s Living on Earth, Iâ€™m Bruce Gellerman. Being a parent these days is tough. There's a lot to worry about: Will my kids get jobs, can we afford their education? And now: How will climate change affect their future? Until journalist Mark Hertsgaard became a dad, he didnâ€™t take this global issue personally. Now he does.

His new book, "Hot: Living Through the Next Fifty Years on Earth," tells the story of a new father's attempt to come to terms with his fears and his hopes for the future. Mark Hertsgaard talked about his book with Living on Earth's Steve Curwood.

CURWOOD: Now you've been covering the climate beat forâ€¦well, as long as Iâ€™ve known you - at least 20 years, if not more.

CURWOOD: And so, how did the story of climate change change when you became a father?

HERTSGAARD: Well the irony is that the birth of my daughter coincided with a major paradigm shift in the climate story, in the climate problem. What changed, sometime around the turn of the century, was that global warming triggered outright climate change, and it did so a hundred years sooner than scientists expected. And so that huge shift in the problem â€“ the fact that now weâ€™re locked into a significant amount of climate change, even if we do everything right â€“ that is a major paradigm shift, and it happened to coincide with the birth of my daughter.

CURWOOD: So, when your daughter is old enough to understand, how will you explain climate change to her?

HERTSGAARD: Well luckily, I havenâ€™t had to cross that bridge yet; itâ€™s obviously a question I think about a lot. She is not quite six. She has a good grasp of general ecological principles already and the importance of not cutting down trees, for example, and keeping our water fresh, and our air clean and safe. And she understands that much about global warming and climate change, even at this age.

CURWOOD: Mark, letâ€™s talk about what gives you hope here. And perhaps we could start with an example from your part of the world, the west coast of the U.S., King County there in Washington.

HERTSGAARD: Youâ€™re right Steve, I focused on solutions in this book. One of the most exciting solutions that I came across, certainly here within the borders of the United States, takes place in Seattle, King County, Washington. And itâ€™s due to an amazing political leader there named Ron Sims, who served three terms as the chief executive officer of King County, which includes the headquarters of such massive firms as Microsoft and Starbucks and Amazon - Boeing has a large operation there. So a very business-friendly place, but also a place that is going to be powerfully impacted by climate change.

So what has Ron Sims done there at King County? He had all of his staff, all 13,000 people who work there have been told: â€˜Ask the climate question.â€™ And what that means is to think out to the year 2050, ask climate scientists, â€˜What will be the climate conditions facing the Pacific Northwest?â€™ And then, work backwards from that knowledge to today to figure out what we need to prepare for that. And so, for example, I visited a place called Green River, south of Seattle, where a levee breech there would cost the local economy 46 million dollars a day in lost supplies and services.

And by making that economic argument, Ron Sims was able to convince people that we need to strengthen these levees. And perhaps the most astonishing thing about this â€“ I went to see some of these repairs â€“ is that Ron Sims raised taxes in order to strengthen these levees. Not only did he raise taxes, but he got re-elected after he did it. Now in much of America that will seem pretty bizarre that a politician actually got away with raising taxes.

And yet, the reason that he was able to do that was that he explained to the local business people and the local townships and the local governments that if we donâ€™t strengthen these levees, weâ€™re going to have here what we saw in New Orleans, a local economy absolutely devastated by extreme weather.

CURWOOD: Now itâ€™s not just politicians who make tough decisions and get the consent of the government to work on adaptation. As an example you cite in your book folks in West Africa make someâ€¦ well they have some wonderful, low-tech sustainable farming practices there. Perhaps you could tell us.

HERTSGAARD: To me, that was the single most hopeful story in this entire book Steve. Here youâ€™ve got some of the poorest people on the planet â€“ illiterate farmers in Burkina Faso, Mali, Niger, who are, even though they donâ€™t know the term climate change, they have been adapting to it. And what theyâ€™ve been doing is so simple and ingenious â€“ they are allowing trees to grow as they sprout, amidst their fields of millet and sorghum.

And, the reason it works is that when youâ€™ve got little bushes and trees in your fields, they provide shade, which lowers the temperature and helps the plants to grow, but more importantly - the scientists told me - are the root systems that go down into the earth. Those treesâ€™ roots systems go down into the earth - they ventilate the soil. That means that when there is rainfall, that the rain soaks into the earth rather then flashing off into creeks and disappearing.

And, literally, the underground water tables have been rising in these areas. Weâ€™re seeing doubling and even tripling of the crop yields, and by far the most gratifying result, weâ€™re seeing that child malnutrition rates in these areas are plummeting. Itâ€™s really such a remarkable success story. And to me, for those of us living in the United States, it shows that if some of the poorest people can do that much to adapt in those kinds of extreme circumstances, surely the rest of us can do our share.

CURWOOD: Now throughout this book, you ask yourself, where will your daughter Chiara be able to best survive in the next 50 years. How much do you think about that question and what do you have for an answer for it?

HERTSGAARD: Oh, I think about that question a lot. I got started a little late, as a father, so it is very possible that when she is of an age to decide for herself where she will live, that I might not be there to advise her. And so, actually at the end of the book, I write her a letter that she will be able to open on her 15th birthday in the year 2020, and hopefully sheâ€™ll be reading the book then and look at the various places Iâ€™ve thought about where she might live.

But, Iâ€™ve also been a dad long enough to know, as Iâ€™m sure you do too, Steve, that what dad says is not always what child does, and she will probably decide for herself where to live. And I say that the one piece of advice in the letter that I write to her: Try to find a place that has a secure water supply, that has a functioning government, and above all, our best hope going forward is going to be tightly knit communities of people who work together, and I trust that my daughter will make a very good choice when that time comes.

Mark Hertsgaard with his daughter, Chiara, a member of what he calls, â€œgeneration hot.â€ (Photograph by Francesca Vietor, Courtesy of Houghton Mifflin Harcourt)

CURWOOD: You know, as a dad myself, there is great power in what you put forth - how much do you think this dad force can be channeled to wake up folks who continue to be in denial.

HERTSGAARD: So, Iâ€™m hoping that this book will, in fact, help both dads and moms, and grandparents, and uncles and aunts, and all of us who have young people in our lives who we love, to say, â€˜We arenâ€™t really doing what we can on this problem.â€™ All of us who are conscientious parents, we think about giving our kids proper food and protecting them from bullies and when they scrape their knee, we gather them into our arms and comfort them. Well, climate change threatens far, far worse damages than any of that. Fighting climate change is now part of the parentâ€™s job description.

CURWOOD: Hey Mark, before you go, could you read a bit of what you wrote to your daughter?

HERTSGAARD: Yeah, I write her a letter and I say at the end: â€˜At this point, my precious, beautiful daughter, all thatâ€™s clear is that our civilization is entering a storm. There is no way around it, we have to go through it. We have to be brave, resourceful, and never give up. I would give my life to see you safe on the other side. With more love than I can say, Daddy.â€™

GELLERMAN: Thatâ€™s journalist Mark Hertsgaard reading a letter to his daughter Chiara from his new book, "Hot: Living Through the Next Fifty Years on Earth.â€ He spoke with Living on Earth's Steve Curwood.


Find out more about Mark Hertsgaard and his work at