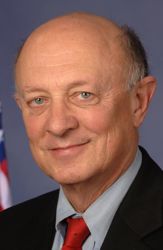 Global political turmoil is turning oil into an increasingly expensive addiction. Jim Woolsey, former director of the CIA, tells Living on Earth's Steve Curwood that the recent spike in prices at the pump could just be the beginning.

GELLERMAN: Well, our reliance on fossil fuels not only has consequences for climate change but national security as well.
[PROTESTERS CHANTING]

GELLERMAN: The uncertainty and the sometimes brutal suppression of protesters in these troubled, oil-rich regions have sent the price of petroleum soaring. Since the wave of uprisings, oil has topped a hundred dollars a barrel, and prices at the pump have drivers and the economy hitting the brakes.

Jim Woolsey says for the U. S., the bad economic news could be just beginning. Woolsey directed the Central Intelligence Agency during the Clinton administration. He recently spoke with Living on Earth's Steve Curwood.

CURWOOD: So, you have been a long-term advocate for dealing with the question of imported oil, for A) national security, and B) taking care of the environment. So, this has to be a moment that you have long anticipated.

WOOLSEY: Well, I think it's going to happen again and again and again, perhaps not with the revolutions throughout the Middle East, but for one reason or another, we will be in a situation in which we are paying huge amounts of money to other countries, many of which, as several Presidents have said, they don't like us very much - for our ability to transport anything, because transportation is dominated by petroleum products, about 95 percent, and OPEC controls close to 80 percent of the world's proven reserves of conventional petroleum.

Right now they're keeping the price high, even before this last round of revolutions, by pumping only about 40 percent of the world's oil, but holding on to close to 80 percent of its reserves.

CURWOOD: How large is the risk to our economy if there is an oil price shock out of the events now in the Middle East?

CURWOOD: Wait a second. Your math is: if there's an oil price shock back to the peak level we saw last time, the U.S. is going to be borrowing three billion bucks a day from the world'that's a trillion dollars over the course of a year.

WOOLSEY: At a hundred dollar a barrel, we're borrowing close to a billion and a half - if you take it up to 150, say, it's two and a half billion a day. And it's one major reason why our debt is so high, and why the dollar is starting to be looked at askance as a reserve currency by some countries. It's stunning how' I mean, our oil debt is much bigger than our trade deficit with China. Everybody is worried about the trade deficit with China - well that's an important thing to worry about, we need to work on that. But the oil, the amount we borrow to import oil, is much bigger.

CURWOOD: So, what you're saying is that our balance of trade deficit, America's debt to the wider world, is going out for oil. At the same time, we're looking at cutting the federal deficit - there are moves there that would reduce federal spending on energy redevelopment, renewables, so on and so forth'in the present circumstances, how wise do you think that is?

WOOLSEY: Well, some of the things that we have done are really focused at electricity not oil, although people like to make speeches saying, 'Foreign oil is a problem, oil is a problem, therefore let's have nuclear power plants.' Well since only 1 to 2 percent of our electricity comes from burning oil these days, you can build all the nuclear power plants you want, but it has virtually nothing to do with getting off petroleum.

The same thing is true of wind farms - those may be two perfectly fine ways to produce electricity cleanly, but they don't really have anything to do with oil, and neither did cap-and-trade. Drill-baby-drill also is not the solution - that helps the balance of payments a bit, but with three percent of the world's oil reserves and 25 percent of the world's oil consumption, we're not going to be able to drill ourselves out of OPEC having effective control of the market.

CURWOOD: So, what's the solution?

WOOLSEY: What we have to do is break that monopoly oil has, and anything we can do to, not only use less of oil - that's not all that useful because the Saudis and others will just cut back production more in order to keep prices high - we've got to get off onto other fuels. And it's not that we're addicted to oil, as it has been said, it's that our cars are.

One thing is: look to Brazil - and require that all of our new vehicles be''flexible fuel, open standard' is the phrase. And what that means is that they can use any mixture of gasoline, or alcohols, and not just ethanol, but methanol, so-called 'wood-alcohol,' which can be made rather inexpensively these days out of natural gas. You can still produce it for two dollars and something a gallon with today's technology. What you can't do is use it in an ordinary car, because the fuel line is the wrong kind of plastic. And, it is a very small change, a hundred dollars or so in the manufacturing process, and what that would do is open up petroleum products, like gasoline, to competition.

CURWOOD: Now you've been making the national security pitch about getting off of oil for a long time - what kind of cultural resistance have you run into?

WOOLSEY: Normally, what happens is that people say, 'Oh yeah, I know it's a problem, but we can't really spend the money to do it just yet.' It's always, not refutation, but delay. It's one reason why I've gotten particularly interested in Boyden Gray's point, published in a very detailed article a couple of years ago, that what the oil companies use to enhance octane, once we got the lead out back in the 70s, is so-called aromatics - benzene, toluene, xylene - it's that sweet smell that you smell when you're pumping gasoline. Those are highly carcinogenic.

And, Boyden's calculations indicate that well over a hundred billion dollars a year in added health care costs and shortened lives, come from us using that to enhance octane. Well, you could use alcohols instead. You can use methanol made from natural gas and it's not carcinogenic.

So I keep trying with the national security issues, and climate change issues, and pollution issues and now health care issues - whatever will work. I look on oil, sort of, as I guess maybe the G-Men back in the 20's and 30's looked at Al Capone. He's done a lot of things wrong, and if you can't get him for murder, get him for tax evasion. But - whatever works.

CURWOOD: James Woolsey is the former director of the Central Intelligence Agency and now a senior fellow at the Jackson Institute at Yale University. Thank you so much, sir.

WOOLSEY: Good to be with you.

GELLERMAN: There's more of Steve's interview with Jim Woolsey - and more about the melting arctic at our website, L-O-E dot ORG.


Click her for Boyden Gray's paper on the health costs of petroleum.

More of Woolsey on independence from oil.

Listen to an extended interview with Jim Woolsey.