The Noisy Ocean and its Conseqences 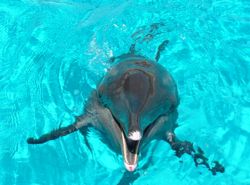 Hearing for many sea creatures is as important as sight is to humans. Without sound they can’t tell where they are or who’s around them. And the sounds humans makes in the ocean may be drowning out the regulars. Living on Earth’s Ike Sriskandarajah looks into the science of aquatic acoustics.

GELLERMAN: For us, this is the sound of the sea. But creatures that live under the waves have a totally different soundscape - one that human activities have made increasingly noisy. And the cacophony could be disturbing sea life that depends on sound to survive. Living on Earth's Ike Sriskandarajah prepared our report.

SRISKANDARAJAH: Jacques Cousteau called the ocean “The silent world,” and he gave that name to his 1956 underwater documentary.

Le Monde du Silence by Jacques Cousteau and Louis Malle gave us the first color video of the deep sea.

SRISKANDARAJAH: But while it's mostly silent to us - to its regular residents, the ocean can sound like a busy street corner. And research from two ocean scientists, shows us the significance of sound in the sea.

SRISKANDARAJAH: The first study comes from David Mann, an associate professor of biological oceanography at the University of South Florida. He recorded these bottlenose dolphins around Tampa Bay.

MANN: Yeah, it’s an underwater recording - it’s in the middle of the night. Everything you hear in there is completely natural sound. There’s a dolphin whistling at high frequency, and then there are fish sounds - which most people don’t know about that are lower frequencies. The fish sounds are like…ba ba ba ba ba.

If beached dolphins are deaf, Mann says that releasing them back into the wild is a death sentence. (photo: David Mann)

MANN: And so it’s interesting for people for a number of points. One is that, you know, there’s a lot of animals in the ocean using sound for communication.

SRISKANDARAJAH: Mann says every dolphin has its own signature whistle. That’s how a baby dolphin identifies its mom through all other calls around it. Just like if we met and I’d say, ‘hi! I’m Ike!’

SRISKANDARAJAH: But whistles aren’t just to identify which dolphin is Bob. They also tell them where they are and what’s around. Being able to hear is vital. For dolphins, deafness is disorienting.

MANN: In the dolphin’s world, if you even have a 40-decibel hearing loss, your range of echolocation is going to drop by a hundred fold. And that’s basically making the animal blind.

SRISKANDARAJAH: For five years, David Mann would rush to the beach whenever he heard of a stranded dolphin. And he would give the dolphin a hearing test.

MANN: Yes, and it is completely non-invasive. It’s the same exact test that they use with human infants to test for deafness. And so, the one difference is, you know, we don’t have headphones, per se, for dolphins. We use what we call a jaw-phone, which is simply a small speaker in a suction cup.

SRISKANDARAJAH: The dolphin would have a speaker on its jaw and a suction cup on the top of its head to monitor brain waves. The brain waves show up as a line on a little portable screen.

MANN: They’ll play a sound to you like ‘boop, boop, boop.’

David Mann and his team administer a hearing test to a rough-toothed dolphin named Sleepy. Dolphins hear through a fat pad on the lower jaw. The light blue suction cup is a “jawphone” and the other two suction cups measure brainwaves. (photo: David Mann)

SRISKANDARAJAH: In a healthy dolphin, the brainwaves go wild at that tone. But a lot of the time, David was staring at flat line.

MANN: You know, the first time we though our equipment wasn’t working. Because it’s basically that you’re not getting any electrical response off the brain when you play sound to it. But then we started seeing this, you know, more then one time, and we also had animals at the same location that had normal hearing, so…

SRISKANDARAJAH: Over the five years Mann and his team conducted these tests, they found that more than half of the bottlenose dolphins that beached themselves had significant hearing loss. But he thinks that just might be part of being a dolphin.

MANN: Deafness is common in humans, and so there’s no reason to suspect that dolphins are going to be any different than humans.

SRISKANDARAJAH: But there’s another possibility. Human-made sounds might be hurting their hearing in ways we don’t understand. 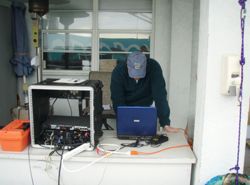 David Mann checks for brain activity in a dolphin’s auditory cortex. The portion of a dolphin’s brain dedicated to hearing is relatively larger than a human’s, and should be very active. (photo: David Mann)

MANN: If you start running hundreds of thousands of ships on the same shipping channel back and forth, you know, all of the time, and you raise the background noise like 30 and 40 decibels on average continuously, now you’re affecting lots and lots of animals. And it’s happening out in the ocean so it’s a lot harder to actually figure out what the effects are.

SRISKANDARAJAH: David Mann isn’t the only scientist wrestling with that question - so is Susan Parks.

PARKS: So that’s the joy of science.

SRISKANDARAJAH: Parks is an assistant professor of acoustics at Penn State. She studies how ocean noise might affect one of the oceans largest and rarest inhabitants - the Right Whale.

PARKS: Right. So Right Whales are endangered and there are about 400 left in the north Atlantic now.

SRISKANDARAJAH: They’re so rare now because they were the ‘right’ whales to hunt. And man is still the danger.

PARKS: These whales are living in an area that’s highly influenced by human activities- similar to animals that live in the city. Most things that people might do in the ocean, either intentionally or inadvertently, produce sound as a byproduct.

PARKS: The one that we think about a lot with the species that I study are the sounds generated from commercial shipping.

SRISKANDARAJAH: Parks wanted to know how that had affected Right Whales.

PARKS: One of the simplest ways to do this was to look at recordings from the 1950s when there were fewer ships in the ocean to ones made in, sort of, modern time, when there was a higher level of background noise.

SRISKANDARAJAH: Go to the tape. The first was recorded in 1956, the same year Jacques Cousteau called the ocean the silent world. The tape made by William Schevill of the Woods Hole Oceanographic Institute, is a little scratchy.

SRISKANDARAJAH: Fifty years later, Parks made another recording of Right Whales at the bay of Fundy where Maine meets Canada. 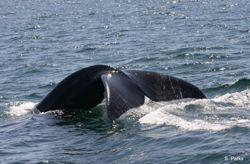 Since right whales can live 65 years, Parks says it’s possible that the whales William Schevill recorded in the 50’s are the same whales she recorded in 2006. (photo: Susan Parks)

PARKS: The main difference between the two recordings, and if you listen to it… you can hear that the sounds produced by right whales in the 1950s, there’s actually been a shift upwards of about 30 hertz for this species.

PARKS: Uh, a little less than an octave, yeah.

SRISKANDARAJAH: So they sing higher to cut through the ship noise, and they also sing louder. As we ratchet up our volume, so do the whales. But perhaps there’s a limit.

PARKS: It’s possible that when the noise level exceeds a certain threshold, they just stop calling.

SRISKANDARAJAH: And Parks says that could make the lonesome leviathan even more solitary. 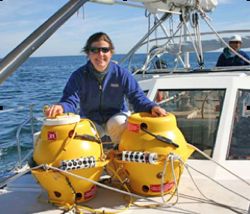 Susan Parks sends her acoustic recorders to the bottom of the Bay of Fundy to record right whale vocalizations. (photo: Susan Parks)

PARKS: Individuals don’t make a lot of calls - they’re relatively sort of a strong, silent type. In an endangered population, this is particularly of concern because there are fewer individuals out there. They’re in the same ocean and they need to find each other to mate, and to relocate their offspring.

SRISKANDARAJAH: But how these whales will actually cope with an increasingly noisy world is still an open question.

PARKS: So, you’ve sort of gotten to the heart of why I actually…why I study whale communication. We don’t know!

SRISKANDARAJAH: But we do know that the ocean never was Cousteau’s ‘Silent World.’ Life in the ocean has always been noisy. But now there are four billion more people then there were in 1956. With all of the decibels human trade and industry generate at sea, navigating through the din is the 21st century challenge for ocean creatures.