At the SVF Foundation farm in Newport, Rhode Island, scientists harvest embryos from rare and heritage breeds, and freeze them in liquid nitrogen to safeguard them for the future. Living on Earth’s Jessica Ilyse Smith visited the farm to find how and why scientists want to preserve these animals.

GELLERMAN: It’s Living on Earth, I’m Bruce Gellerman. There’s an unusual sign at the entrance to a farm in Newport, Rhode Island warning the public is not welcome. It reads: “Biosecure area. Absolutely no trespassing. Please leave immediately.” But Living on Earth’s Jessica Ilyse Smith got into the off-limits farm and reports from behind the closed gate. 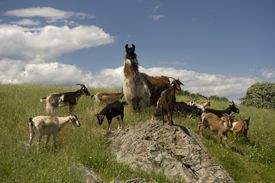 SMITH: A stately llama stands guard atop a hill. He’s protecting an unusual herd of goats and sheep from lurking coyotes. Among them are hairless faced Gulf Coast Sheep, Hog Island Sheep with curled horns, and Tennessee Fainting Goats—an apt name since when startled they stiffen and fall to the ground. These aren’t ordinary barnyard beasts; these animals are all heritage breeds. Sarah Bowley, the livestock manager for the SVF Foundation, says the organization’s mission is to protect these oddball animals from extinction.

BOWLEY: We focus on critically endangered breeds that are based in North America that were important to the founding fathers when they started the country. 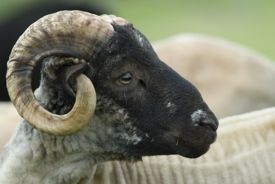 SMITH: It’s a sunny day, and a crisp breeze rolls in from the Atlantic Ocean, barely a mile away. Bowley takes me to visit the farm’s newborn goats.

BOWLEY: Baby goats are just so much fun. You know, compared to the other species they can just be so entertaining to watch.

SMITH: A bold kid named Rob comes up and sniffs my microphone.

SMITH: Rob is an Arapawa goat with shaggy fur on his legs and a badger-like striped coat. Bowley explains just how extra-ordinary he is. 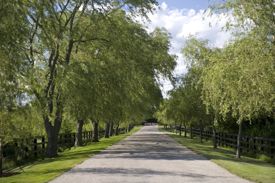 The long path into the farm. (SVF Foundation)

SMITH: Rob was a frozen embryo because Arapawa Goats are critically endangered. In the last census two years ago the Arapawa Goat Breeders USA found a population of just 318 individuals worldwide. Bowley says these animals are worth saving, not only for their friendly personalities, but also for their disease resistance—a trait that could come in handy in the future if illness strikes more popular goat breeds.

SMITH: Part of the process of saving these endangered species is using a more common breed as a surrogate mother. In this case, Rob’s mother was a common dairy goat, a Saanen.

SMITH: This energetic kid is the product of a highly scientific lab procedure not unlike human in vitro fertilization. Embryos are harvested from pregnant female goats and brought to the lab to be frozen. 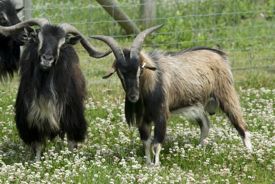 SMITH: Bowley and I head out of the barn and go to the lab where the scientific process happens. Dr. Dorothy Roof, the lab supervisor, greets us at the door and shows us around.

ROOF: In a way, how the lab is laid out tells you the process of what we do.

SMITH: The lab has three rooms. In the first room Dr. Roof places the embryos into a special freezer that steps down the temperature &frac12; a degree a minute until they reach minus 35 degrees Celsius. Once they’re frozen, she plunges the embryos into liquid Nitrogen to preserve them. 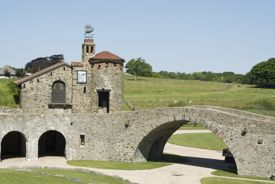 This bridge on the grounds illustrates the SVF Foundation’s motto, “A Bridge to the Future for Heritage Breds.” (SVF Foundation)

SMITH: This is important, as scientists predicts large biodiversity losses in the next few centuries. We move into the next room where tissue biopsies and serum samples are collected from each embryo.

ROOF: The serum will contain all of the antibodies that the animal has in its blood. So in a way it’s a running readout of all of the pathogens that they’ve been exposed to during their lifetime.

SMITH: In the final lab sit four massive, stainless steel tanks. Each tank is filled with about four feet of liquid nitrogen—they act as a large insulated thermoses for the embryos. Roof opens up the tanks.

SMITH: And vapors billow out. 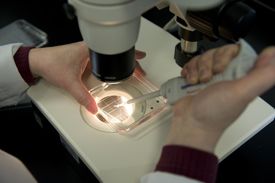 ROOF: It’s always the picture that everyone wants to take when they come here—the liquid nitrogen vapors. It is pretty spectacular.

SMITH: But all you can see is the vapor. So Dr. Roof sucks it off with a hose.

SMITH: Inside the tanks there are tiny red straws filled with embryos, each labeled with information about its biological parents. The whole process is closely monitored to make sure that the embryos will be viable for hundreds of years.

A row of cryogenic tanks, where the embryos are frozen. (SVF Foundation)

ROOF: It’s kind of reverse archeology. I try to think to myself what it would be like for me 100 years from now looking back at the person who made these embryos into the tank. I also think about what would happen if it were really like an archeological dig and all of the records were lost.

SMITH: Right now the SVF Foundation is focusing on 25 critically endangered breeds of goats, sheep and cattle, their goal is to freeze 300 embryos of each breed.

[SOUNDS WALKING FROM THE LAB] 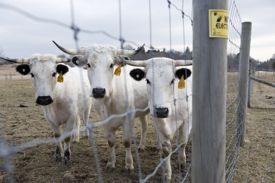 SMITH: As Sarah Bowley and I leave the lab she talks about the loss of animal diversity. Livestock breeds are going extinct at a rate of about one per month. Saving them is important, she says, because many of these animals can act as scientific models for human diseases.

SMITH: Also, Bowley says keeping these embryos around might one day solve a global problem.

BOWLEY: So, if there’s a disease outbreak or a certain texture or flavor of meat that’s desired or any other genetic combination that these animals can solve, we want to have their genetics available, even in just a frozen form, so that they can be reawakened and brought back hundreds of years from now. 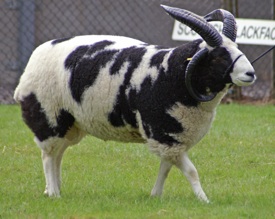 SMITH: For now the embryos slumber in their deep freeze, and wait until they’re called upon to resolve some crisis. And who knows, in the future the fate of the human food supply might just be resting on their horns. For Living on Earth I’m Jessica Ilyse Smith in Newport, Rhode Island.


Learn more about the SVF Foundation and take a look at the different animals on the farm.

A Bridge to the Future for Heritage Breeds