The unprecedented rise in food prices around the world could foreshadow things to come in a climate-changing world. Economist Gerald Nelson of the International Food Policy Research Institute tells host Bruce Gellerman about a diet for a climate-changing planet.

GELLERMAN: It’s Living on Earth, I’m Bruce Gellerman. Call it a diet for a climate-changing planet. In the future we’ll be eating more potatoes, beans and lentils, and less meat and animal products. And we’ll be paying a lot more. That prediction is in a new report from UN scientists.

But we’re already getting a glimpse of things to come, as costs rise and food grows scarcer. Recently there have been food riots and demonstrations in several North African countries. Gerald Nelson is an agricultural economist and senior research fellow at the International Food Policy Research Institute.

NELSON: We’re currently, as of Jan 2011, looking at price levels that are about the same as they were in at the peak in 2008. And 2008 was a year that we saw a few governments change and food riots in the streets of several countries. The thing that makes the spikes particularly bad from an insecurity perspective is the sudden change.

You know, if things change gradually, we can adapt, we can find ways to try different systems. But if all of a sudden the prices go from, you know, a dollar for a loaf of bread to two dollars for a loaf of bread and your monthly income is only ten dollars, you’re in real trouble in terms of being able to feed yourself and feed your family. So it’s these sudden shifts in prices that cause the political unrest that we’ve seen in the past, 2008, and while I hope we don’t see it in 2011, it’s certainly a possibility.

GELLERMAN: So, why is the price of food going up these days?

NELSON: Well a variety of reasons. But for the most part, the drivers of the high prices at the moment are various kinds of weather-related shocks. The Russian drought and high temperatures of last summer, the floods in Bangladesh, the floods in Australia, all of these are causing wheat prices to go up. 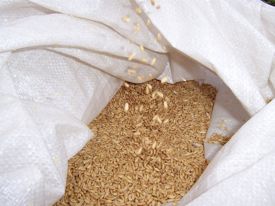 There is a shortage of harvested wheat like this around the world. (Photo: Wiki Commons)

In the United States, the USDA just released a new report that suggests that the grain stocks in the US are shorter than expected caused partly by weather. And there are some other weather-related phenomena around the world that are causing various markets to spike upward and likely to continue to go up, I think.

GELLERMAN: Well, weather comes and goes. What about this wildcard of climate change? How does that affect our agriculture?

NELSON: Well we’re not to the point where we can say these particular things we’re seeing right now, or that we saw in 2008, can be attributable directly to climate change. But we can expect to see more of these kinds of events in the future. And so I think we should look forward to a future with more of these price spikes and more uncertainty about what’s going to happen to the availability of food in any particular year.

GELLERMAN: This stuff has deep and widespread national security implications.

NELSON: Indeed! I was at a meeting yesterday where some of the members of the National Security Agency of the United States were asking questions about, well, what does this really mean for our United States national security? Not to mention threats to the rest of the world.

Obviously the short answer is it’s a complicated question and we don’t know. But we’ve seen governments lose their power as a result of food price spikes in the past, and if some of the dire predictions on the consequences of climate change, for example in sub-Saharan Africa take place, then we could see substantial, for example, migration events happening. A lot more climate migrants than we currently have environmental migrants. And the risk of domestic strife in those countries, plus spilling over into the rest of the world, is something that intelligence agencies are already concerned about.

I am cautiously optimistic that we can deal with the challenges coming by 2050. But if we get beyond 2050 and we haven’t dealt with greenhouse gas emissions, then I’m really worried.

GELLERMAN: The two drivers that people are looking at towards the year 2050 are: Population increases -- there are more mouths to feed, I guess nine billion people by 2050. And then income growth -- people are going to be making more money and they’re going to want to eat higher on the hog. 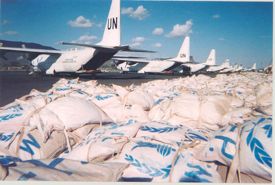 The United Nations World Food Programme transports food aid around the world to feed people in countries where there are extreme food shortages. (Photo: Wiki Commons)

NELSON: Yeah, that’s right. And add to that fact that most of the increase in population is going to take place in what we call the developing countries today. But much of the income increase also takes place in those locations. So you have kind of a double whammy from the population and income growth in particular parts of the world. And with great uncertainty it still seems likely that those places are going to be the places that will suffer more from climate change than what we call the developed countries today.

GELLERMAN: And these are places where they haven’t contributed that much to climate change.

NELSON: That’s correct. Those countries have very low emissions and so in some sense they haven’t contributed to the problem that we have today. But, it’s also the case that as they grow and their agriculture sectors are expected to produce more food, if they adopt the same practices that we’re using in the north in the rich countries of today, then there will be a lot more greenhouse gas emissions.

And so they need to think about being carbon negative in their agricultural sectors. That is, not only reducing and eliminating their greenhouse gas emissions from agriculture, but actually taking carbon dioxide out of the atmosphere and putting it into the ground, increasing the soil carbon. We’re not there yet in terms of saying this, “We have the magic bullet or set of magic bullets,” but I think we’re going to have to find them if we’re going to deal with global warming.


Visit the International Food Policy Research Institute to learn more about current food prices and how they are related to weather.