Living on Earth remembers a crusader for the Appalachian Mountains, Judy Bonds, who died January 3rd at age 58. The miner’s daughter-turned-activist fought against mountaintop removal mining and longed to return to her family land.

CURWOOD: In the coal country of West Virginia, a courageous voice has fallen silent. Coalminer’s daughter-turned activist Judy Bonds died January 3rd after a battle with cancer. She was 58 years old. Ms. Bonds won the Goldman Environmental Prize in 2003 for her fierce and uncompromising opposition to coal industry abuses.

[BONDS ADDRESSING CROWD AT A RALLY]

BONDS: Over 100 years ago, the greed and corruption of the coal industries stole our great state. We’re here to take it back today, starting with Coal River Mountain!

CURWOOD: The Coal River Valley in West Virginia is ground zero in the fight between environmental activists and coal companies that blast the tops from mountains to expose coal seams. The waste rock and dirt are dumped into streams and valleys, including Marfork Hollow, where Ms. Bonds and six generations of her family had lived. Mountaintop removal forced her to leave her home. 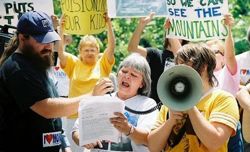 BONDS: Every time I pass by this hollow, I look, and it hurts. It breaks my heart, because this is where I was born and raised, it hurts.

CURWOOD: When Living on Earth’s Jeff Young profiled Judy Bonds in 2003 she said the memory of the land that had sustained generations of her family motivated her to act.
BONDS: The celebration of life was everyday, the connection everyday to the community and to the land, and to the rivers and the streams. And that's basically what we're trying to preserve.

CURWOOD: Ms. Bonds and her grassroots group, Coal River Mountain Watch, waged a campaign against Massey Energy, operator of many mountaintop removal mines. Massey Energy has a poor safety record, including an April 2010 explosion that killed 29 men. Ms. Bonds looked for any way to slow the mining down, including scanning maps for old family cemeteries near a mine’s boundary.

BONDS: There's a law in West Virginia, and they cannot mine within 300 feet of a cemetery. Basically, I would say our dead ancestors are helping us to fight these coal companies.

CURWOOD: Judy Bonds herself will be buried in a family cemetery along the Coal River, at rest among the mountains and streams she cherished.