His Royal Highness Prince Charles thinks we are careening towards environmental crisis. To avert disaster, he says we need to re-think our relationship with nature. He outlines his views in the book Harmony: A New Way of Looking at the World. Host Steve Curwood speaks with the book’s co-author, Tony Juniper.

PRINCE CHARLES: This is a call to revolution. The Earth is under threat. It cannot cope with all that we demand of it. It is it’s losing balance and we humans are causing this to happen.

CURWOOD: That’s His Royal Highness Charles, the Prince of Wales reading the opening words of his new book, “Harmony: A New Way of Looking at the World.” 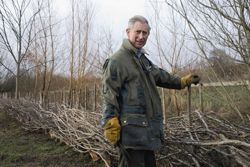 PRINCE CHARLES: Revolution is a strong word and I use it deliberately. The many environmental and social problems that now loom large on our horizon cannot be solved by carrying on with the very approach that has caused them. If we want to hand on to our children and grandchildren a much more durable way of operating in the world, then we have to embark on what I can only describe as a “sustainability revolution”--and with some urgency. This will involve our taking all sorts of dramatic steps to change the way we consider the world and act in it, but I believe we have the capacity to take these steps. All we have to see is that the solutions are close at hand.

CURWOOD: Prince Charles is no newcomer on the environmental scene. In a keynote address, at the 2009 climate talks in Copenhagen he urged the world’s leaders to act quickly. For three decades he’s been traveling the world and meeting with experts on everything from deforestation, climate change, to organic farming. And that whole time, he’s been formulating his diagnosis of the problem, and what to do about it. He believes we have lost touch with the basic principles of nature, and prescribes a return to “the active but balanced state of harmony,”--the title of his book.

At the cornerstone of the Prince’s philosophy is what he calls “a crisis of perception.” He believes we are trying to fix the symptoms instead of addressing the true problem - that we have abandoned spirituality and other ways to harmonize with the natural world, in favor of a mechanistic approach.

PRINCE CHARLES: We have come to function with a one-sided, materialistic approach that is defined not by its inclusiveness, but by its dismissal of those things that cannot be measured in material terms.

STEVE: Tony Juniper is His Royal Highness’ co-author, and former head of the Friends of the Earth in the UK.

JUNIPER: We began writing Harmony a little over 2 years ago with a third co-author called Ian Skelly and the 3 of us have been working to really encapsulate and to project the underlying philosophy that has been Prince Charles’ driving mission.

The Prince started a campaign using a computer animated frog to encourage support for his Rainforest Project. (Clarence House)

CURWOOD: Isn’t Prince Charles’ view quite radical here, in calling for revolution. Part of the thesis here some might see as a call really to the end of capitalism. I mean, in the book one finds the thesis that economic growth is not a good thing.

JUNIPER: We don’t call for the end of capitalism, but what we do say is that the existing capitalist system is in grave danger of self-destruction if it leads to the removal of the fundamental services which underpin it. All of that economic development which we measure in terms of growth and GDP, ultimately is dependent on nature and the argument we make is that without the natural capital, all of those different ecosystem services, capitalism in terms of the economic phenomenon which we measure and grow and which many of us derive our wealth from, it cannot continue. 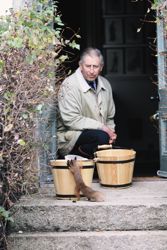 The native red squirrel has disappeared from much of its native range in Britain. (Charles Sainsbury-Plaice/Clarence House)

CURWOOD: What does it mean to be the Prince of Wales, to be in this position? And how does he see himself and deal with what others think of him as he presents these ideas?

JUNIPER: I think the heir to the British throne, to be the Prince of Wales, is for him the opportunity to take a long-term view on behalf of the whole of society. But he doesn’t need to be re-elected every 5 years, he doesn’t need to improve the quarterly results of a corporation, he doesn’t have to be driven by the 24 hour, 24/7 news headlines, he’s able to take this long-term view. And I think for him, that’s the core of what it means to be the Prince of Wales. You know, the British royal family, the British monarchy, the institution of the British monarchy, if it can do anything that’s going to be of great assistance in our modern world, it’s doing that. To be able to look over the horizon in a way which so many other institutions cannot do, for reasons that we all understand.

CURWOOD: Tony Juniper is co-author with Ian Skelly and Charles the Prince of Wales of the book “Harmony: A New Way of Looking at Our World.” Thank you so much, Tony.

JUNIPER: Thank you so much Steve, it’s a great pleasure to be able to contribute.


Check out the documentary inspired by the book Harmony