Some States Get Going For High Speed Rail

Since President Obama announced a push to build out our nation’s highspeed rail, plans have been repeatedly sidetracked by state politics and budgets. Host Steve Curwood asks Federal Railroad Administrator Joe Szabo if rail improvement projects have much future or if Americans will be left waiting at the station.

CURWOOD: Now high-speed rail seems like a no-brainer - faster travel, less pollution, job creation - but the process to build these bullet trains in the U.S. has been on anything but a fast track. The Obama administration has ten and a half billion dollars to invest in modernizing the rails, and yet some states are saying - no thanks. Joe Szabo is the Federal Railroad Administrator – and a man with a deep heritage in the industry.

SZABO: I’m a fifth generation railroader. We go back to the late 1800’s with my great, great grandfather who worked for the Chicago Burlington and Qunicy. My father was a forty-year railroader, so I followed his footsteps into the industry.

CURWOOD: Now, along with the U.K., I think the United States is the oldest train country in the world, but we are certainly far from the most advanced. What’s the outlook now for high-speed rail in the U.S.?

SZABO: This is the first president in the United States to really have a vision for rail since Abraham Lincoln and his vision to construct the trans-continental railroad 150 years ago. And, so, since President Obama has made this a priority, and we have been able to, from scratch, put a program together. Less than a year ago we made the first announcements on the first elections for awards, and two years later we’re actually seeing construction start.

CURWOOD: After President Obama announced his rail plan, a number of states really said, ‘eh, we’re not terribly interested.’ I think Ohio, Wisconsin have really dropped out of this process. And, your administration now has shifted this money to California and Florida, which are more shovel-ready. Why are these states opting out of federal largesse for rail?

SZABO: If a state chooses not to move forward with passenger rail at this time, certainly that’s their right. The competition for the dollars is very, very immense, and so it’s very easy for us to shift those resources to those states that are serious about moving forward that understand the importance of providing options. We believe that this program is not only an important part of improving mobility, but has great potential to be a job developer. Studies indicate that 20,000 manufacturing and construction jobs are created for each one billion dollar of rail investment. 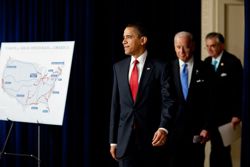 President Obama announced plans for new and improved passenger rail in the fall of 2009. The 24 states that applied for high-speed rail corridors is now down to 2. (Photo courtesy of DOT)

SZABO: Yeah, there’s no question that California, probably even more than any other state, is well positioned to achieve their vision. You know, the voters there have passed a bond issue that has set aside matching funds for the federal dollars and so their markets, their population density, the distances between San Francisco and L.A., just have tremendous potential. 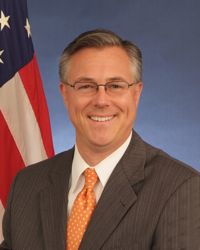 Federal Railroad Administrator Joe Szabo. His family has been in the train business for 5 generations. (Photo courtesy of DOT)

SZABO: Well, actually, I need to debunk that myth. The vision is not to, you know, have high-speed rail lines that run from New York to Los Angeles. In those cases, air is clearly a more efficient mode. And so, this is more a matter of understanding those regions where inter-city passenger rail actually ends up being a more efficient mode than short-haul regional flights or trying to drive your automobile. So, it’s a matter of allowing each mode to do what it’s most efficient at doing, and in many markets, rail is in fact, the most efficient mode.

CURWOOD: Your dream for the next golden spike to be driven?

SZABO: Well, I don’t know that there’s a single golden spike I’d like to see a series of golden spikes as these projects come to fruition in California and Florida, in the Midwest in the state of Illinois, the improvements that are being made to the Down Easter up in Maine, it’s a great little project up there- the service in Vermont, and seeing the next generation of upgrades to the northwest corridor. So, I’m looking forward to seeing progress made in several different regions across the country.

CURWOOD: Joe Szabo is the Federal Railroad Administrator. Thank you so much, sir!

SZABO: Thank you, a pleasure talking with you!