Taking the Temperature of the Cancun Climate Talks

In Cancun Mexico, co-hosts Steve Curwood and Bruce Gellerman eavesdrop on opinion makers, protesters and negotiators at the 16th Conference of Parties, the annual United Nations climate talks. After disappointment in Copenhagen last year, hopes are not high for a major breakthrough on control of greenhouse gases, but attendees do expect progress on forestry protection and targeting cash to help developing nations adapt to climate change.

CURWOOD: From the UN Climate Summit in Cancun, Mexico, this is Living on Earth. I’m Steve Curwood.

GELLERMAN: Waves crash along Cancun’s famed beaches. It’s a timeless backdrop to the climate negotiations where delegates from around the world are racing against time. This is the 16th year the United Nations has convened its Conference of Parties – the meeting designed to hammer out an agreement to deal with greenhouse gases and global warming.

GELLERMAN: The music is hot as climate negotiators, members of NGOs, and journalists cool off after a long day of meetings gathering in a bar at the Moon Palace complex, the mega hotel where the climate talks are taking place.

CURWOOD: This year, climate delegates in Cancun need to demonstrate at least some progress after last year’s disastrous meeting in Copenhagen. At that summit what seemed to be a done deal --- a legally binding agreement to cut greenhouse gases -- came undone. Producing just a last minute, voluntary accord, brokered by the largest emitting nations. This year’s hurricane season may have been the calm before the storm.

GELLERMAN: Despite intense security measures at the UN climate summit- navy ships patrolling off shore, federal police, and I.D. scrutiny- a group of Mexican workers—recyclers demanding an end to waste incinerators and landfills which emit greenhouse gases---were able to organize a demonstration inside the convention hotel.

CURWOOD: Less dramatic but no less emphatic was Marstella Jack who advises Micronesia in the climate talks.

JACK: What I see out of this conference, I think, is more talk on process, only process, but very little on content. What needs to be done is we need to have a fair ambitious and binding legal document that binds all big countries and small countries alike to take serious cuts in their emissions so we can save our planet.

Countries from all over the world are represented at the conference. (Photo: UNFCCC)

CURWOOD: But the talks this year in Cancun are not expected to lead to an all-encompassing treaty. Christiana Figueres is the new executive secretary of the UN climate convention. She says what’s needed now after last year’s near disaster in Copenhagen is incremental progress.

FIGUERES: Cancun will be successful, if parties compromise, if they make sure that in the process of getting what they want, they allow others to leave with what they need.

CURWOOD: One positive sign: contentious rhetoric between the world’s two largest emitters of climate changing gases- the US and China - seems to have calmed, at least for the moment. China’s lead negotiator Su Wei, is director general of China’s climate department - and a veteran of the rough and tumble, and often troubled U.S.-China talks.

CURWOOD: What can come out of Cancun this year? What can happen here?

SU WEI: For Cancun, it’s not the end of the game. It’s only a part, a very important step in the long process. Of course, we would hope that since this is a global challenge, we need active politics and actions from all parties and we also hope the U.S. would honor its commitments in terms of reductions of its emissions of greenhouse gases. 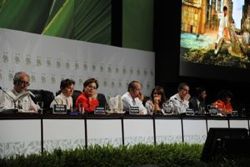 PERSHING: The president has also made and we continue to affirm the commitment that we made in Copenhagen last year. We are not moving away from that. Clearly, the next steps of implementing that are going to have to go through Congress, through regulation, through executive order. We’ll work on all of those tracks, all of those avenues at home to implement those programs and meet that commitment.

GELLERMAN: And, in what may be a significant breakthrough, the U.S. and China have reportedly agreed on a mechanism for measuring and verifying cuts in greenhouse gas emissions—something the U.S. had insisted on, and China had resisted. The bilateral deal may have helped save the multinational UN process.

GELLERMAN: Jennifer Morgan, is Director of the Climate and Energy program at World Resources Institute.

Community members gather in front of the Municipal Palace in Cancun, Mexico to pray in support of climate reform during the COP16 Climate Change Conference, on Tuesday Nov. 30, 2010. (Photo: Mark Malijan)

JACK: We’ve talked too much. Too much talk. The only action that we’re seeing is the sea level rising and the temperature heating up. This is about survival, it’s not carbon credits. It’s about survival.

GELLERMAN: Scientists now warn the risk of abrupt or irreversible climatic shift is growing – and the evidence keeps mounting.


Visit the website for the UN Climate Change Conference