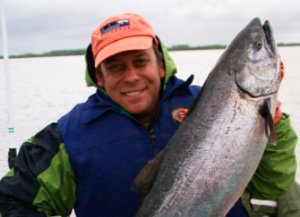 The Food and Drug Administration is poised to make a decision about whether to allow genetically modified salmon in the marketplace. Paul Greenberg, author of the new book "Four Fish," says it's one of many decisions the government has to make about the future of salmon that will have a huge effect on our environment and our last wild food.

YOUNG: Well, obviously Ron Stotish has his own fish to fry in this case. But whether or not consumers find the whole idea of genetic modification palatable is a whole other kettle of fish. Paul Greenburg wrote the new book “Four Fish,” which tells the story of salmon, tuna, bass and cod, and our reliance on them as food. He has something else on his plate.

GREENBERG: So, Uncle Sam walks into a fish restaurant, takes off his star-spangled hat, and asks the waiter what’s on special.

“Uh, today we have a genetically-modified Atlantic salmon, spliced with Pacific salmon growth gene and modulated by a regulator protein from an Ocean Pout.”

“Not much, I’m afraid, just a wild Sockeye from the pristine unpolluted waters of Bristol Bay, Alaska. What’ll it be?”

If you were in Uncle Sam’s seat, you’d surely chose the wild salmon over the modified one, but our government, forever at odds with itself when it comes to figuring out the puzzle of the American seafood supply, is leaning towards the transgenic. At this very moment, the US Food and Drug Administration is close to approving an engineered Atlantic salmon that grows twice as fast as an unmodified fish. If North America’s existing salmon farms all switch to growing modified animals, we could have about a quarter billion more pounds of salmon in the market every year.

Sounds good on the surface, but seen in the larger context of American fisheries, it doesn’t make much sense. While the government seeks to boost farmed salmon supplies through transgenics, it is simultaneously letting wild salmon go to pot. At the headwaters of Bristol Bay, Alaska, the spawning grounds of perhaps the most productive wild salmon runs left on earth, the international mining giant, Anglo American plans to construct pebble mine. The largest open pit copper and gold mine in the US. Mines of this nature are notoriously bad for fish. Just this summer, a copper mine failure in China’s Ting River killed millions of fish. A similar disaster in the Bristol Bay fishery could mean the destruction of around a quarter of a billion pounds of fish.

Precariously, about the same amount of salmon that Aquabounty hopes to produce with its transgenic fish. US Environmental Protection Agency has the power to stop Pebble Mine through the Clean Water Act, but has so far failed to act. More transgenic fish, less wild fish. You have to scratch your head at a government that’s planning that kind of seafood menu for it’s citizens. Instead of endorsing a risky experiment in genetic salmon modification, wouldn’t it be better if our leaders protected wild salmon habitat? In the end, we’d have just as much fish on our plates, and a safer environment to boot. Personally, I’d hate to go into a restaurant and have a transgenic fish be the only salmon option on the menu. If that ends up being the case, I might just order the chicken.

YOUNG: Paul Greenberg is the author of Four Fish: The Future of the Last Wild Food.