Inspectors give the Low Down on Food Safety 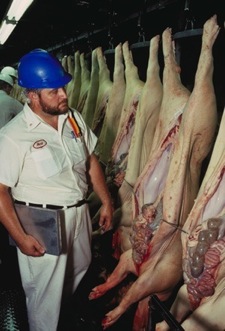 Recent recalls have put a spotlight on the agencies that are in charge of our food safety: the FDA and the USDA. Host Jeff Young talks with Francesca Grifo, director of the Scientific Integrity Program at the Union of Concerned Scientists. Her organization surveyed employees in these two agencies and found some revealing information about our food system.

YOUNG: From the Jennifer and Ted Stanley Studios in Somerville, Massachusetts, this is Living on Earth. I’m Jeff Young. The recent massive recall of tainted eggs put food safety back on the front burner, and put some heat on Congress to consider a Food Safety bill that passed the house but languishes in the Senate.

A recent survey from the Union of Concerned Scientists added new voices to the debate: federal food safety workers. The UCS asked some seven thousand inspectors and scientists in the Department of Agriculture and the Food and Drug Administration how they rate the job they do. Francesca Grifo of the UCS says the survey found a lot of concern about political and corporate influence.

GRIFO: They told us a lot of things, but I think the big picture piece was that, you know, we have a food safety system that is trying to do the right thing, and we have a lot of really good people out there trying. But, we also have a system where special interests and political interferences- it’s just too easy for them to inhibit the ability of these agencies to protect our food.

YOUNG: Give me some specifics. What did your survey tell you about what workers at FDA and USDA think about political interference?

YOUNG: Well, what are we talking about when we say political interference? What might have happened there?

GRIFO: Many different things, but we’re talking about purposefully excluding or altering technical information or conclusions in an agency scientific document. It might also include experiencing selective or incomplete use of data- in other words- another word for this is cherry picking. So, going through and picking out the data that actually gives you the regulatory outcome that you’re after. Now what we’re talking about when we talk about political inference is not so much what the role of the science is in the decision making, but what happens to that science along the way as it goes from the scientists to the regulator or decision maker.

YOUNG: You also asked about the role of corporate influence. What did they tell you about that?

GRIFO: They told us a lot. We’re looking at big businesses withholding food safety information from agency investigators. Now, what does that mean? That means that when an inspector has a question about a piece of food, they go back to industry and say ‘hey, can you tell us where this came from? Can you tell us about the distribution network? Can you tell us any number of different things?” That in fact, instead of saying ‘wow, let us just open up these records so that we can get to this and make sure that the public is safe,’ in fact what we have were 330 respondents telling us that public health had been harmed by businesses withholding food safety information from agency investigators.

GRIFO: We had both. We specifically wanted to tease that out because we were very interested in whether or not a change in administration had, in fact, changed the situation at these agencies. We did do a survey at FDA in 2006 and we are seeing incremental improvements. But, certainly, as long as we have 507 respondents personally experiencing one or more incidents of political interference, and that is within the past year, we still have a fairly big issue out there to tangle with.

YOUNG: I guess you also put in a share-your-thoughts section here. Give us a flavor of what the respondents had to say there.

GRIFO: They really came back to us with a lot, a lot of rich information. And, one of the ones that I really like is from a USDA employee who said ‘First of all, remove food safety inspection service from USDA. It’s like having the fox in charge of the hen house.

Any action we try to take has to pass industry scrutiny and the impact on the bottom line: inspectors in the field lose every time because the bureaucrats at district level and above will not support any action that goes against the wishes of the industry.’ I mean, that’s a hard position to be in, to be that employee who’s on the line and trying to get attention and interest for that.

YOUNG: What happens when one of these workers within the system speaks out and tries to correct the things they see going wrong?

GRIFO: You know, there are multiple whistle-blowers. I mean, that’s what we call somebody who really sees something wrong and tries to bring it to people’s attention. One who we’ve had particularly moving conversations with is a gentleman named Dean Wyatt who was a USDA veterinarian who oversaw federal slaughterhouse inspectors. He was not able to speak out about things he was seeing on the line about problems and issues that had direct relationships to people’s safety.

YOUNG: So, based on what you’re hearing from the people who work in this system, in this survey, what political reforms would make our food safety system better?

GRIFO: You know, I think having the eyes and ears that are there on a daily basis able to speak out about it is critical. So, that’s whistle-blower protections. It’s also that the scientists looking at this need to be able to publish. And, you know, people like you need to be able to call them on the phone, talk to them, and have them not fear retaliation for speaking out. Right now it’s very difficult for them to do that. They’re the eyes and ears inside. We need to have a way for them to get that information outside.

YOUNG: How does what you’ve learned in the survey here pertain to the legislation that is pending on Capitol Hill in the Senate?

YOUNG: Francesca Grifo with the Union of Concerned Scientists. Thanks very much!


Click here to read “Voices of Federal Food Safety Scientists and Inspectors” a survey of both FDA and USDA Scientists.