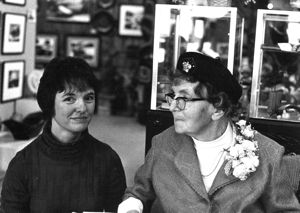 YOUNG: Backyard chicken ranching is enjoying a revival as more people want more fresh, local food. And that’s bringing fresh attention to a 36-page, 35-year-old booklet from Bainbridge Island, Washington. It’s called “Recipe for Raising Chickens”. It was compiled by Nancy Rekow, who recorded the life and lessons of her neighbor, Minnie Rose Lovgreen. Lovgreen had nearly 80-years of experience raising chickens – and an amazing life story that Rekow details in a new book called, “Far As I Can Remember”. Nancy Rekow, thank you for making time for us today.

YOUNG: Where did the idea come from for this book?

REKOW: Well, partly from me and partly from Minnie Rose Lovgreen. She had always wanted to write a book about how to raise chickens. She was an expert, people were always phoning her for advice. And then in 1975 when she was 86 years old she was diagnosed with cancer. So I took my tape recorder into the hospital and said “Ok Minnie Rose, now we’re going to start your book.” We continued on because we had fun doing all that and I tape recorded her whole life story.

A girl with chicks from the National Archives, circa 1970’s. (Photo: flickr, Creative Commons).

YOUNG: Well, give me some examples of what it is Minnie rose knew about raising chickens that other people didn’t.

REKOW: Well, she knew secrets and she had probably raised chickens for 80 years or so and she always had her ears open and eyes open and studied everything around her. So she observed things about the chickens that nobody else knew. I can read you a little section here from page 7 of the book.

“If you peek at a setting hen she says quark, quark, quark in a deep ugly voice to say, ‘don’t bother me.’ She’s very protective when she’s setting. The person should wear gloves to reach in there because the hen will peck. Her beak is like a hard little fish hook….”

“The day before her babies hatch she doesn’t go off the nest at all. She stays right on it. Say about the 18th day, the baby chick is picking at the shell, trying to make a hole to get out. It peeps, and her mother puts her head under and talks to it, even in the shell. She says, in a deep tone, quirk, quirk, quirk. As much as saying hush, everything will be alright.”

YOUNG: It sounds to me like she had a naturalist’s eye for details that were important. 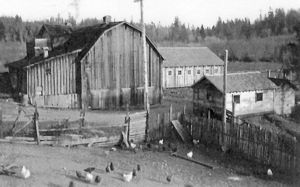 YOUNG: And so you were visiting her with a tape recorder in the hospital…

YOUNG: Let’s hear a bit of that tape. This is her explaining how you can get more chickens by sneaking a few chicks in under a roosting hen.

LOVGREEN: If we buy more chickens to put under her, she can cover more chickens because her wingspan spreads out and she can get. And she can even cover 6 more than she could hatch out. That’s an economical way to build up your flock quicker.

YOUNG: So it was a lot of practical advice like that that she’s passing on to you, but while you’re talking to her… she’s on her deathbed.

REKOW: When I first went into the hospital they had drugged her because they were testing. So her voice was a little faint. But as you listen to the tapes, the voice gets stronger and she was having a great time telling these stories. She knew she’d be sharing all her chicken raising advice with many people, although of course she didn’t know that, well by this time it was 24,000 books sold. But she knew her advice really worked. She loved connecting with people, she loved story telling. And she had her own language. She’d grown up in England and didn’t have very much education but picked up all these story-telling skills along the way.

YOUNG: And you also learned about her really remarkable life.

YOUNG: I mean the fact that she made it across the Atlantic in the first place is pretty astounding.

REKOW: Uh, yes…. because she and her brother, who decided to come to Canada to, as she said, “go ahead better,” they purchased tickets on the Titanic. And then when they got to the docks the Titanic’s sailing was delayed for two weeks. She said, let’s go down and to the docks and see if there’s another ship leaving sooner. And there was, and they turned in their Titanic tickets and came on the other ship. And that’s a great gift because we end up with these 2 wonderful books and of course she ended up with a whole life.

YOUNG: A fateful decision right there.

YOUNG: And here’s another excerpt from the tape recordings where she’s explaining how they ended up with a dairy farm. And, basically, she took charge of that situation. Here’s how she described that:

REKOW: [laughing] That was the right thing to say to you!

REKOW: And that’s a wonderful example of her spirit. Of course by that time she was, what 30 or something, and had had years of experience in solving problems and in inventing creative ways out of situations or into situations. And she had her mind made up that they could have a dairy farm.

YOUNG: And she seems pretty headstrong, and in a way, kind of ahead of her time, as a woman making decisions and taking action.

REKOW: Absolutely, all her life she’d been like that. She was a problem-solver, and yet not in a nasty way, not in an obnoxious, bossy sort of way, although she was rather bossy sometimes, but she explored and thought about it and thought her way through to solutions.

YOUNG: Did Minnie Rose live to see the book? 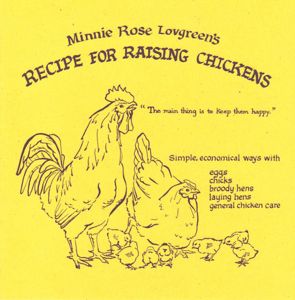 REKOW: Oh yes, she did get to see the chicken book published. So she had the great joy of knowing that her chicken raising advice was reaching thousands of people. People ask me, would Minnie Rose have been astonished that her book is still selling? And I always say, well she would have been very pleased and proud. But the thing is, she knew her advice really worked! [laughs] And so the whole thing has been a miracle and we never know in life when we meet somebody or things come together and we never know at the time what’s going to come out of that.

YOUNG: Well, you know, to me that is kind of the take away lesson from the book and hearing you talk about how this came about is…this happened because you took an interest in your neighbor and bothered to really listen to her.

REKOW: That’s really true, and yes we follow what intrigues us and if we’re fortunate amazing things happen.

REKOW: Thank you very much, and now when you decide to raise chickens you’ll be all set!