Eureka, they found it, unfortunately 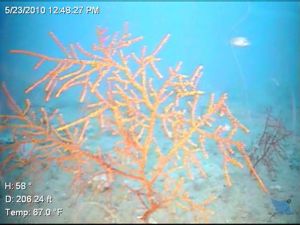 Eureka - they found it, unfortunately. Scientists, using an underwater robot, located one of the giant plumes of BP oil looming under the Gulf of Mexico. Host Jeff Young talks with ocean scientist James Cowan of Louisiana State University about their probe’s journey through the subsurface oil.

COWAN: We went off the mouth of the Mississippi River and were able to detect what appeared to be dispersed oil down to depths ranging from 250-350 feet below the surface and we brought it to the surface and it was clearly dispersed oil. And underwater it looked like spherical globules about the size of a marble drifting in the water column.

YOUNG: So, what do you think is going on about what is keeping the oil beneath the surface rather than coming to the surface?

COWAN: The use of dispersants at depth obviously was a novel idea. I think it was probably a mistake because some of these dispersed oils are getting to a point where they are mutually buoyant in the water column and remaining there without rising.

YOUNG: So, did I hear you correctly? You think the use of dispersants, deep-sea, was a mistake?

COWAN: I absolutely do.

COWAN: Well, first of all, the dispersants are quite toxic, but at the surface they break down very quickly. At depth we don’t know anything about how long the toxicity remains. We don’t know how quickly the dispersants break down and whether it seems that dispersing the oil has changed, in some way has changed, its specific gravity and might be part of the reason why it’s staying at depth. 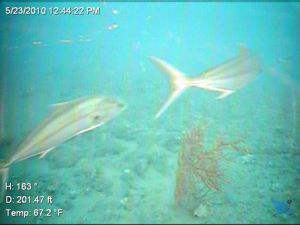 Coral and the fish it attracts in the northern Gulf of Mexico. (Photo: Dr. James Cowan)

YOUNG: Now, BP’s chief executive Tony Hayward has weighed in on this notion of oil beneath the surface. He essentially says there is no evidence there are these deep-water plumes. And he says essentially look, oil is lighter than water, it will come to the top. That’s what it wants to do. What would you tell Mr. Hayward about what you’re finding?

COWAN: I would suggest he read an NRC report that was done in 2003 called “Oil in the Sea,” and it shows clearly in there the physics of how oil can be suspended in the water column. And I can understand why he’s saying what he’s saying, but I don’t think the evidence supports it. And certainly there is plenty of evidence in the literature that suggests oil can be suspended in layers and even on the bottom.

YOUNG: And is there any way of mitigating the damage down there? Do we have any way to deal with oil in the deep water?

COWAN: Not to my knowledge. I think that’s going to be something we’re just going to have to see weather in place and degrade over time. I’m afraid that the toxicity of the oil, the fact that it’s mixed with dispersants probably makes the problem more difficult.

Oil in and of itself is a hydrocarbon and there are communities that can consume it, microbial communities in particular. But we don’t know very much about the toxicity of the dispersants, so there’s so many unknowns it’s very difficult to say how this could play out in the long term.

YOUNG: Now this area that we’re talking about in the Northern Gulf near the mouth of the Mississippi, this is a place where we have this so-called “dead zone” of low oxygen. How might the oil, especially oil deep in the water, affect the oxygen that’s available to marine life in the water?

COWAN: Well, actually, the dead zone is confined to a much shallower region on the shelf. But the important point is that oil is a hydrocarbon and it’s broken down by the consumption by bacteria and bacteria consume oxygen in the process. If there’s oil added to the mix that’s another serious concern because it could, in fact, increase the decline in oxygen levels in the hypoxic zone.

YOUNG: So what happens if the oil contributes to even lower levels of oxygen?

COWAN: Well, I just think there are more unknowns than knowns right now. And I think that’s because of the novelty of the situation, and where the material is actually going, and what it is when it gets there. So I think we’re all kind of flying by the seat of our pants.

YOUNG: Professor James Cowan of Louisiana State University talking to us about the oil we can’t see beneath the surface of the Gulf. Thanks very much.

NOAA on possible links between the oil and the dead zone of low oxygen in the Gulf of Mexico.