Gardening season is here again but the urban gardener doesn't need to be confined to growing plants in containers. In Boston, Patti Moreno, the self-proclaimed Garden Girl, grows so much food in her backyard that she opens up a small farmer's market each summer. Living on Earth's Bobby Bascomb went to check out a garden that is anything but garden variety.

CURWOOD: Michele Obama does it. Thousands of New Yorkers do it. And you too can grow a garden – even if you live in the inner city. That’s the message Pati Moreno is pushing. She’s a native New Yorker, but admits her first horticultural attempts were dismal.

MORENO: Starting out I was horrible. I killed everything I ever planted, but my first success was with some fruit trees. I actually grew apples! They were the most delicious thing ever! So, I was like oh my gosh I can actually plant a plant and eat from it too and I just started branching out from there.

CURWOOD: Today Pati Moreno cultivates 30 raised beds in Boston. She produces so many zucchini and tomatoes and greens each summer she opens up a farm stand in front of her home. Living on Earth’s Bobby Bascomb headed to Boston’s Roxbury neighborhood to check out Pati's brand of urban sustainable living.

MORENO: I just want to see if there are any eggs under these ladies over here. No! No eggs, bummer. 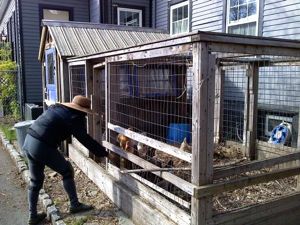 An 8 by 6 foot greenhouse was converted into a chicken coop. Patti sells extra eggs to her neighbors in her summer farmer’s market. (Photo: Bobby Bascomb)

MORENO: They start producing eggs actually at 20 weeks, that’s like a few a week. And as they mature- one day.

BASCOMB: For the average person that whatever to have backyard chickens, how feasible is it?

MORENO: It’s so easy. It’s much easier than a dog. You never have to walk them, unless you want to! They are my garden helpers. They scratch and till the soil for me, they eat all the bugs, and then, they fertilize it.

[SOUNDS OF MOVING THROUGH GATE]

MORENO: Let’s go over to my smaller garden. We’re going go get to work a little bit over here.

BASCOMB: Oh, you’re going to put me to work?

MORENO: And we’re going to put you to work. 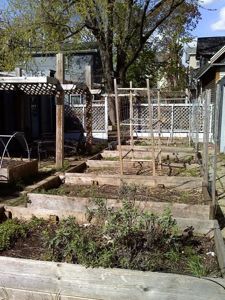 MORENO: This is basically a demonstration garden that I wanted to put together to show what you could do on like an average size backyard. Being Puerto Rican one of the raised beds I plant every year is a Latin Caribbean mixture of beans and peppers and cilantro—all of the things that you would need to make this thing call sufrito, which is like a base flavor for a lot of the food that you would eat in Latin Caribbean culture.

MORENO: I have a four-by-four raised bed that’s two tiers high, and then I have a square-foot grid that I made that fits right into the raised bed and that’s basically going to be our guide as to where we’re planting everything.

MORENO: We’re going to companion plant. In this whole bed we’re going to be able to make an amazing stir-fry, so we’re going to have to eggplant, a Siamese dragon stir-fry mix, which has tons of different Asian greens in them.

[SOUNDS OF BAGS OF DIRT MOVING] 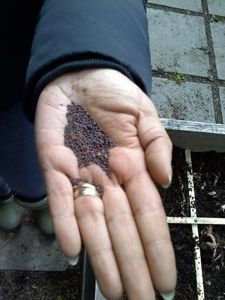 ROBERT: Look, Asian greens are nice. It’s nice, it’s spicy, it’s a different taste, but how about some potatoes and some corn and some lettuce?

ROBERT: My name is Robert Patton-Spurill and I’m Patricia’s husband. I want a record of potato. I want to do 800 pounds of potato and I’m trying to do 200 pounds of corn.

BASCOMB: Wait a second, how big is this garden that you’re growing all of this in? 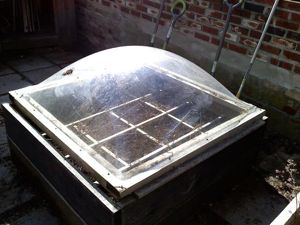 Patti placed an old skylight over a garden bed to create a mini greenhouse. Inside it is the square foot grid she uses to demarcate where to plant her seeds. (Photo: Bobby Bascomb)

MORENO: This part is for his man garden this year.

ROBERT: You know a lot of people grow potatoes in trash barrels, and that’s the coolest thing ever because basically they put the potatoes at the very bottom in like 6 inches of soil, and as it grows up they keep filling in soil around it, and then at the end of the year they dump it out on a tarp, pull all the potatoes out, and they start over again.

And then that one trash can version people have done really gigantic amounts of potato in it.

MORENO: We every year manage to eat so many meals from the garden. You know the supermarket people do not know me.

MORENO: Urbanites—it’s our responsibility to start being as sustainable as we possibly can because in the very near future, there’s going to be 70 percent of the world’s population that’s going to live in cities.

MORENO: Anything you grow and then eat is going to be the tastiest thing you’ve ever had, as long as you don’t burn it you’re fine, and it’s a lot of fun.

CURWOOD: Living on Earth’s Bobby Bascomb prepared that audio portrait of Pati Moreno, and her inspiring garden, and there’s more at our website, l-o-e dot org.

CURWOOD: Coming up: the heady scent of hidden chemicals in your perfume—that’s just ahead on Living on Earth.

"> Click here for a Garden Girl video on building a raised bed for urban gardening.