Making a Novel out of an Anthill 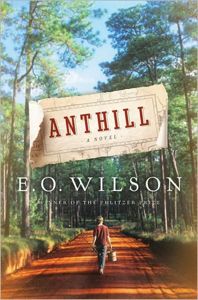 E.O. Wilson is a two-time winner of the Pulitzer Prize for non-fiction and a world famous biologist. Now in his eighth decade, he took on a new challenge: writing a novel. Wilson talks with host Jeff Young about "Anthill," a work of fiction that was inspired by his childhood.

YOUNG: E.O. Wilson is probably one of the best-known living scientists. The Harvard professor’s study of ants and conservation work has made him practically a household name. Now at the age of 81 Edward Osborne Wilson is trying something new—fiction. His latest book “Anthill” is his first novel. It has ants in it, as the title implies. But it’s inspired by his boyhood spent roaming the woods round Mobile, Alabama.

WILSON: After 59 years at Harvard, all of my adult life, I wanted to go home. And I couldn’t do it easily, physically, but I could do it spiritually. So along with the novel I’ve written a history of that part of the South. So this novel that I wrote, “Anthill”, comes together as a recreation in part of my early childhood, but also of the culture as I perceive it now. I see the crisis phase the South is in now is in the land, and how we in the South would use the land, whether we will introduce the idea of sustainability, whether we’ll save our natural resources, and how much of our original environment we will save.

YOUNG: Well, that is the central conflict in the novel is your main character, Raff—Raphael Semmes Cody, who decides to try to save his beloved local tract of woods. Tell me about your character here—Raff.

YOUNG: Really? I hadn’t noticed that!

YOUNG: Let’s see, he grows up in Alabama, he likes ants and nature and he goes to Harvard that does sound vaguely familiar now that you mention it.

WILSON: Well, you know a novelist, particularly a first novelist should go along the best-worn paths of his personal experience.

YOUNG: Write what you know, they say.

WILSON: And Raff has a history that resembles mine just about up to the time he goes to college, but then after that his life veers off radically. He goes into the study of law.

YOUNG: But he never loses sight of his main goal, and that is to save that tract of woods that is so important to him. And what I find interesting is he chooses to return to and work within the social institutions that are kind of part of the problem, that are the developers who might destroy this tract of woods.

WILSON: Yes, Raphael is I admit like me, he is what could be call an agitated moderate, or a radical centrist. Comes to realize that the best way to solve seemingly intractable problems is by win-win solutions. 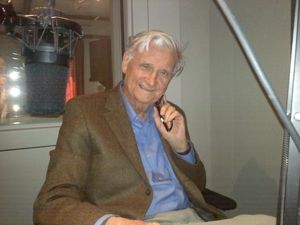 WILSON: Actually, it calls for a strategic, smart mix. I am well aware, now being deeply involved in conservation in the South Alabama and Florida panhandle area myself. The best thing to do is to buy the land, but this is not a wealthy part of the country. Alabama as a state does not have the wherewithal to buy new parks. When we find a priority area the best thing to do is to get them all put aside—all of it put aside and reserved. But if you can’t achieve that, then you take the next option, which is to actually work with developers.

YOUNG: Along the lines of writing about what you know—you write at length in here about ants. There’s a sizable section called “The Anthill Chronicles” where ant colonies essentially become your characters for a good quarter of the book there.

WILSON: Mm hmm, that’s true, in fact they are characters in the novel. And the whole point of the novel is that we will be examining three worlds that exist simultaneously, and one of them is the ants, which builds civilizations in the dirt.

The other is of the humans, and the third is the ecosystem. I chose the most abundant insects on earth and ones with the most highly evolved social systems—the ant. They make up more than half of the biomass of insects on the earth, ants. They are the most socially evolved; they have the most complex system of any creatures outside of humans. And being organized into colonies, many species in a way are constantly at war. They have many of the problems that humans have, in competition among groups, in the way they develop loyalty to their groups and the way they keep the groups tightly organized.

YOUNG: One of these colonies undergoes some genetic mutation, which allows it to greatly expand what would normally be its restrictions—does that actually happen with ant colonies?

WILSON: Yes, supercolonies happen. A very simple change in the genetics—one gene change can bring them about. In the fire ant, the case we know best, there was one mutation and what that mutation did was silenced the tendency of the colonies to distinguish one another, so they fused. It also impaired or silenced the ability to tell how many queens it had.

And the result of that was these colonies then fused into supercolonies, and sometimes they can have millions—well, tens of millions. Where in one extreme case that we know of in Japan, a hundred million workers. Then you have lots of little queens all scattered through the colony, as well, and the risk to the environment is that supercolony can saturate the environment more effectively then can a conjures of colonies that are spaced well apart from one another.

YOUNG: And in this case, they completely overwhelm their natural surroundings and exhaust their resources—

WILSON: They overwhelm the other colonies when the other colonies didn’t have that gene, so they were following the rules, so to speak. The supercolony overwhelmed them, it just had all the advantages, but in doing so it then started overusing the environment and difficulties lay ahead.

YOUNG: Now, in the book “Anthill” the anthill is the analogy for human society to some degree. So is it your view that’s what going on in humanity, that some genetic mutation is responsible for us—

WILSON: Yeah, I like to put it in terms of what we call parallel evolution, or convergent evolution, and it’s true that many of the problems that arise in the human condition come from having strict group identity, it appears to be a deep instinct of people to belong to a group and the tendency then for us to not only belong to a group and get the security of belonging to a group, but for groups to be in contest with one another in one form or another. And for us to have powerful emotional response to our group—

YOUNG: Not just us, but us versus them is the—

WILSON: Us versus them is the binary—ants have a parallel.

YOUNG: You know the novelist Margaret Atwood, she reviewed your books in the New York Review, and she points out that taking on a novel is not without its risks. And here’s what Ms. Atwood, who’s written a few books herself in the realm of fiction, has to say: “Those of us who have been at this for a while might have warned him off—stick to what you know, we might have said, rest on your considerable laurels, don’t risk having the literati point and jeer. What have you got to gain?” Were those questions nagging at you, do you have any second thoughts about having gone down the route of fiction?

WILSON: It doesn’t nag on me at all; I already have tenure at Harvard!

YOUNG: How much damage can they do?

WILSON: More than that, I’d already retired. Besides, I thought I could pull it off pretty well. I got very excellent reviews from the New York Times book reviews and so on from novelists, and I feel vindicated. There’s some that may have given me a bit of slack because I was a scientist coming over with the right attitude, but I wasn’t afraid of doing that and felt that had something very substantial to offer and that is the deeper scientific insights we have of nature.

Most novelists don’t go that far, they want—they have dark woods through which people pass to get to the lighted house, a marsh in which they are in danger of their boat sinking. And they describe nature as that or a little bit better detail, but never the way I’ve tried it, and in such depth.

WILSON: Nope, I don’t think so. I’ve got several books in the pipeline now that are absorbing my attention, and they’re nonfiction and one of them is on the evolution of social behavior—new insights into it. And these are very absorbing to me, and after all, I haven’t got that much more time to spin out novels one after the other.

YOUNG: E.O. Wilson—Ed Wilson, thank you very much for coming by, it’s a great pleasure.

WILSON: Thank you, it was a great conversation.