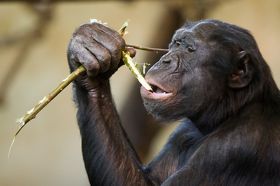 Unlike their close cousins, the Chimpanzee, when it comes to sharing Bonobo apes share and share alike. Chimps will fight over food but Bonobos are peace-loving animals and get their just rewards for sharing. Duke University evolutionary biologist Brian Hare discusses his latest research on Bonobo behavior with host Jeff Young.

YOUNG: So say there’s one slice of pizza left in the box and two of you eyeing it. Your human brain says, “we can share.” But your animal instincts say, “MINE!”

Well, of course, you share. Voluntarily sharing is one of the ways we define our humanity – part of what separates us from the animals, right? Well, recent research from Duke University’s Hominid Psychology Research Group indicates we are not unique in that regard. The group’s director, Dr. Brian Hare, works with one of our closest relatives, the Bonobo.

YOUNG: Life in Bonobo land is very different from life in chimp land. And Dr. Hare thinks we could learn a lot from those differences. For example, his latest study put Bonobos in the same situation as that pizza box showdown we talked about.

HARE: Basically they had a choice between sharing food with another bonobo, or they could just hog all the food themselves and gobble it down and how we gave them that choice is we let them into a room with some prized fruit. Also in that room there is a door and the door has a one-way key and if they open that one-way key they can let in another bonobo. Now, the other bonobo can’t enter the room unless the bonobo that has all the food decides, okay, I’m going to let this guy in and he can have some food. So that was the choice they had, and drum roll – the answer is they love to open the door and let the other bonobo in and share the food instead of just eating it all themselves. They like to eat together.

YOUNG: What do you think is driving this? What do bonobos derive from sharing food?

HARE: Well, I think that bonobos are very social. You know, their social world is so important to them that evolution has sort of shaped them so that they are very tolerant with one another. They enjoy sharing food; they aren’t as competitive as their close relative the chimpanzee. And that really just enables them to be a little bit more generous than other species.

YOUNG: What else was going on while they were eating?

HARE: Well, okay, so bonobos are famous because they’re very tolerant with one another but they’re tolerant because anytime there’s tension in the group they use sex as a social lubricant. So if there’s a lot of food provided to bonobos or if they find a big fruit tree in the middle of the forest in the Congo Basin where they live, then usually what happens is instead of what a chimpanzee group would do – displaying, and fighting, and saying, okay I’m dominant, get away from all this food – bonobos basically rub themselves all over each other, they chill out, and they go eat together peaceably. Basically, bonobos don’t want to eat, and then play and have sex – they want to eat and play and have sex.

YOUNG: So what is the evolutionary benefit of this? I’m assuming there must be some benefit to them. Is this an example of altruism or are they gaining some advantage here?

HARE: So that’s the 64 million dollar question because really what we were trying to test with this experiment is that we know that animals share, so even chimpanzees, they share food. And many other animals share food, but usually when animals are sharing food there’s some very simple, selfish motivations that could be driving the sharing. So, for instance, when it comes to chimpanzees sharing, well we know that chimps will often share with non-relatives, but when they’re sharing, they’re sharing because they’re trying to get somebody who’s harassing them to go away. So what this experiment really rules out is that it’s not that they’re sharing because of harassment. So then the question becomes exactly what you just said, is this altruism or is there some other underlying selfish motivation. And we’ve got some ideas about what those might be.

HARE: It may not be that this is purely generosity in the sense that, oh, I feel so sorry for that bonobo next to me who has no food and it just hurts me that that poor bonobo doesn’t have any food so now I’m going to give that bonobo some food. Instead, it might be, hey, I’m on a blind date here, I’ve never met this guy, I might interact with this other bonobo in the future so why don’t I just give him some food and maybe next time we meet that bonobo will be nice to me.

YOUNG: So, a favor in the favor bank kind of approach –

HARE: You got it!

HARE: So, basically it could be there’s some political strategizing going on here.

YOUNG: Does this kind of behavior seem to pay off for bonobos are they more successful because of this?

HARE: Well, I don’t know if it makes them more successful than chimpanzees because they actually live in very difference places. So is it that there is something south of the Congo River that has shaped the bonobos so that they have a very different social system than chimpanzees. So chimpanzees have male dominance, they have lethal aggression where they raid neighboring territories to kill each other and they do all these things that sort of represent the darker side of human nature. But bonobos are female dominated, there’s no evidence for lethal aggression, and instead when there’s some tense moment in the group they have sex, and they have a good time, and they share food. So, really the question is, what is it that ecologically south of the Congo River has allowed bonobos to sort of have this relaxed, more egalitarian society?

YOUNG: And how can we mimic that in our society is what I want to know! [Laughs]

YOUNG: They’ve got it made!

YOUNG: Not to mention the sharing food is nice, and then the, you know –

HARE: Yeah, that’s not bad, either. And you know, sort of it’s like the ‘60s all over again. So, yeah, I mean it could be a lot better if we could release our inner-bonobo and tame our inner-chimp, we might be happy. So, hopefully if we keep doing lots of research at this orphanage Lola Ya Bonobo in Kinshasa…The sad reality is that bonobos are highly endangered because of the bush meat trade in the place we work is a bonobo sanc – I mean is an orphanage for babies of mothers who have been killed for their meat. And so hopefully if we keep working with these guys we will find ways to learn and unlock a little bit more about the biology of aggression especially if we compare chimps and bonobos to one another. And I mean, what species could be more important to study than the species that’s found a way to live peaceably among each other?