Birds on the Wing 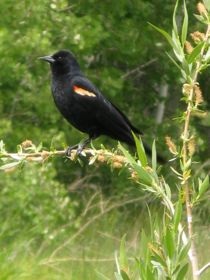 They fly by night, and the males arrive first to set up the breeding grounds. Not only that, but they sport regional dialects. Naturalist Laurie Sanders takes a look at a favorite songster - the red-winged blackbird.

YOUNG: Many of those prairies will soon come to life with the song of this bird. Red-winged Blackbirds are found in most of North America. They’re gregarious. They’re abundant. And after a long winter, they’re back in the northern U.S. and Canada.
Massachusetts naturalist Laurie Sanders takes a closer look at this familiar songbird.

SANDERS: Chickadees and tufted titmice and house finches started singing their territorial songs back in January. Cardinals more than a month ago. Their songs are a signal we’re over the hump. But this:

SANDERS: Tells us spring is really coming. Red-winged blackbirds are the first migratory bird to return to the Northeast. Every year, whether or not there’s snow on the ground, red-winged blackbirds arrive here around mid- to late-February. Their migration north from Florida and other southern states is triggered by changes not in temperature, but day length. And once they start their migration north, they don’t waste time, dawdling along.

BYERS: They are generally nocturnal migrants.

SANDERS: Bruce Byers is a biologist at UMASS-Amherst.

BYERS: They fly at night and stop during the day, to rest or sometimes for multiple days on route to feed. Although like most songbirds, their northern migration is often fairly rapid. So they make their way here in a relatively short period of time. And the males arrive first. We haven’t seen any females yet, so it’s kind of a sexually divided migration, where the males move north first in a group. But once they reach their breeding area, the males begin to break off from their flock and set up a breeding territory on a cattail marsh or similar wetland for the most part.

SANDERS: For now, the males are still roosting together at night. And at different times of the day, you can see them feeding together, often at your bird feeder where they eat all kinds of grains and seeds. And Byers says they need to eat those seeds because defending a good territory is energy intensive.

BYERS: As you can imagine, it requires a lot of work. A lot of displaying. A lot of…you’ve probably noticed, that they chase and fight as well as sing and display their plumage marks. And so quite an investment in acquiring a territory.

SANDERS: Male red-winged blackbirds have multiple mates, and with a good territory a male can usually attract two, three, four, sometimes as many as 15 females. But Byers says females are choosey. When they arrive they check out territory after territory before deciding where to build their nests and lay eggs. And while the females are looking around, the males are showing off.

BYERS: If you watch redwings carefully, you’ll notice that when the male sings the conkaree song, it’s accompanied by a wings spreading display where the male leans forward, spreads his wings in such a fashion that the bright red shoulder patches – or epaulets – are displayed at the same time as they sing. It’s a coordinated vocal and visual display, and some classic experimental work done a few decades ago has shown that if a male’s epaulets are not showing, in other words, if an experimenter say dyes them black, the male has a very difficult time defending a territory. By the same token, if an experimenter causes a red-winged blackbird to go temporarily mute, during the period when they can’t vocalize, they cannot successfully defend a territory.

SANDERS: But Byers says it’s not exactly clear what a female is looking for in a song. Just like people living in different parts of the country, red-winged blackbirds have regional dialects. For instance, here’s the sound of a male red-winged from California.

SANDERS: Versus one sung by a bird in Massachusetts.

SANDERS: Byers says these regional dialects develop because the conkaree song is learned. It’s passed from one generation to the next.

BYERS: A red-winged blackbird cannot produce a song like this unless it hears adults singing this kind of song while it is young. And in many species of birds, what the young are doing are memorizing and imitating the adult songs. And it’s not strictly imitation that’s going on in this species. That the young birds, in addition to imitating, some aspects of what the adults are doing are also kind of making their own wrinkles on it. They’re doing a little improvising.

SANDERS: By the time a male red-winged matures, he’ll have developed four to eight variations of the conkaree song and use them throughout his lifetime. And we can hear those. Usually a male will sing one rendition several times in a row, and then switch to the next, and so on.

SANDERS: But in addition to the learned conkaree song, redwings – both males and females – produce several other calls. Byers admits biologists don’t know all the purposes of these, but they have a pretty good idea about how some of the different calls function. Like this sound –

SANDERS: Is used during aggressive displays or when a bird is alarmed.

BYERS: Again both males and females do something similar and they do this so much, both on the breeding territory and in flocks, that the main thinking about what its function might be is that to be some kind of contact call. A way of just staying in touch, advertising one’s presence to the other members of the flock or the other individuals that are on the territory. Just a way of saying, “I’m here. I’m here. I’m here,” repeatedly.

SANDERS: In the next few weeks, female redwings will arrive and add their voices to the sounds of the marsh. By the time they get here, other spring migrants will have already returned. Common grackles. Eastern phoebes. American woodcock. And each of these will add its own distinctive voice to the rising chorus. But for now, male red-winged blackbirds are the stars of the marsh. For Living on Earth, I’m Laurie Sanders.