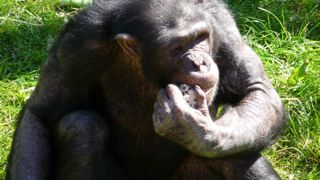 Liberius was one of 11 chimpanzees at the Edinburgh Zoo involved in the Chimpcam project.

Curious to see how other animals look at the world? Researchers gave a group of chimpanzees at Scotland’s Edinburgh Zoo a chance to capture their lives on camera. The result is Chimpcam - the first film shot by chimpanzees. Host Jeff Young talks with University of Stirling’s Betsy Herrelko about reality TV from a chimp’s eye view.

YOUNG: It’s said that if enough monkeys tap away at keyboards for long enough, they’d eventually produce a work like “Hamlet”. How many monkeys? We don’t know.

But we do now know just how many chimpanzees it takes to make a television show: 11. And it took them about a year and a half. We know this thanks to the Chimpcam project at the Edinburgh Zoo in Scotland, which boasts the first film shot entirely by chimps. University of Stirling PhD student Betsy Herrelko helped make Chimpcam happen.

HERRELKO: Well, Chimpcam was an idea that was formulated about nine years ago by a producer at Burning Gold Productions, John Capener. He saw a documentary on TV, it was terrible, poorly done, and he thought a chimp could have done a much better job filming that. And that’s when Chimpcam was born.

HERRELKO: Well, chimps are apes, so they’ve got a little bit better chance of understanding what’s going on than a few of our monkey friends. We tried to teach them the different properties of video before giving them a camera. And just kind of tossed it on in there, let them have a go at it. And they really just played around with it. I’m not confident I could say anything about if they understood it, but they had fun with it and we got some amazing footage that just shared a bit more about how they live their lives.

YOUNG: And who’s the cast of characters here?

HERRELKO: We have 11 chimpanzees from Edinburgh Zoo. They range in age from ten to 48, and there are six males and five females, and they’re possibly the funniest bunch of coworkers I’ve ever had the pleasure of working with.

YOUNG: See this sounds to me like not too far from a reality TV show already.

HERRELKO: They have all the drama that a lot of viewers would appreciate in a reality TV show.

YOUNG: This is the real life Edinburgh Zoo edition.

YOUNG: So, tell me how did the chimps react when you started handing them cameras?

HERRELKO: Well, they were really curious at first, which is exactly what we want to see as researchers. We want our animals to be excited about what we’re doing because we want them to have as much fun with it as possible. And the first day we put it in their enclosure the youngest chimp, Liberius, was very excited about it and didn’t want to give it up. So he kind of carried it around and tried to hide it a little bit from the higher ranking individuals. But eventually they all had a go at it, so it was really nice kind of a sharing activity.

YOUNG: So what is it that chimps like to record when they have a camera?

HERRELKO: Gosh, a little bit of everything. We got toes, different parts of their bodies, different parts of the enclosures, but on occasion we saw some beautiful moments like a lovely kind of panning scene of two chimps grooming in front of the camera, and some nice movement across the enclosure. So it’s things that you’ve never had a chance to see before really up-close and personal that makes it extra special.

YOUNG: So how did they actually operate the cameras?

HERRELKO: It’s a very primitive form of a camera, so they don’t have to do anything. They don’t have to hit record, they don’t have to zoom, it’s just stationary in that respect. But they just can carry it around and manipulate it however they chose. They can aim it on anything and there’s a five-inch monitor that they can watch what’s happening.

Liberius was one of 11 chimpanzees at the Edinburgh Zoo involved in the Chimpcam project.

YOUNG: I’m imagining it’s a little shaky, a lot of movement in the camera, I’m thinking…did you see the film “The Blair Witch Project”?

YOUNG: Is this the “Chimp Witch Project”?

HERRELKO: Oh, I like where you’re going with that. It’s a little less scary, but it’s definitely has that kind of shake appeal. So, it’s not for the weak-stomached folks out there.

YOUNG: This is described as a non-invasive project. What does that mean, and why is that important?

HERRELKO: To me, a non-invasive research project means it doesn’t cause pain or discomfort to the animals. And that’s usually important from a welfare standpoint; you want everything to be on your animals’ terms because if they’re happy then you’re going to get more better results that really reflect how they’re thinking. We don’t want them to be scared by anything by any means. And that’s something that Edinburgh Zoo’s really supportive of, as well as the University of Stirling. So it was really the perfect collaboration for me to be a part of.

YOUNG: No chimps were harmed in the making of this film we’re happy to report.

YOUNG: Okay. And what did you learn?

HERRELKO: We learned that chimps are greatly different. They’re all individuals that have different learning techniques, and while we didn’t learn as much as we were hoping to about cognition, we have a great data mine about what it takes to start a research program like this. These are older chimps; they’ve never done anything like this before, and we wanted to take it as slow as they needed us to. And I’m pleased to say they were really excited about many aspects of it. So, we got to go pretty far.

YOUNG: And what’s the reception been like? Critical reviews, public response?

HERRELKO: We’ve had some incredible public response. The hits on the website, chimpcam dot com has been incredible, and going to the zoo site. It’s really been a pleasure just to see how interested people are in chimpanzee behavior.

YOUNG: And do you think this has, I don’t know, the power to change public perception of chimpanzees somehow?

HERRELKO: That’s what you always secretly hope. I think chimpanzees deserve a voice and I’m just so privileged to have a chance to share a little bit about what I’ve learned about them. I hope it will help them to realize how incredible these animals are. They’re intelligent, they can experience emotions – there’s a whole gamut that this film touches on, and if we can change just a few minds to encourage them to conserve a bit more then we’ll be more than pleased.

YOUNG: Besty Herrelko, PhD student at the University of Stirling who spearheaded the Chimpcam Project. Thanks very much!

HERRELKO: Thank you so much!


Check out this sneak preview of Chimpcam.

Learn more about the Chimpcam project.