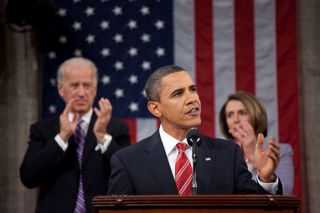 President Obama lays out his policy goals for the coming year, heavy on jobs and clean energy. (Photo: Pete Souza, Courtesy of the White House)

President Obama laid out his policy priorities at his first State of the Union address. High on the president’s to-do list is passing a comprehensive Clean Energy and Climate bill. But to do so will take a shift in bipartisan support. Host Jeff Young speaks with Daniel Weiss of the Center for American Progress and Dave Jenkins from Republicans for Environmental Protection about the president’s emphasis on the need to address climate change.

YOUNG: From the Jennifer and Ted Stanley Studios in Somerville, Massachusetts – this is Living on Earth. I’m Jeff Young. In the days leading up to President Obama’s first State of the Union address, the buzz among beltway pundits was that climate change might not make it into the speech. What with the public focused on jobs and the economy, global warming? That would be downplayed at best. The President proved them wrong with a prominent call for Congress to deliver climate change legislation. 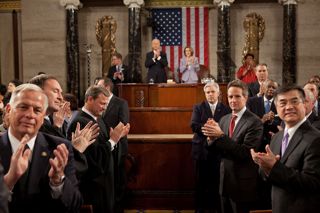 President Obama walks down the aisle of Congress to deliver his speech. (Photo: Pete Souza, Courtesy of the White House)

OBAMA: I know there have been questions about whether we can afford such changes in a tough economy. I know that there are those who disagree with the overwhelming scientific evidence on climate change.

YOUNG: Climate change came higher in the speech than did health care. And the President used the phrase “clean energy” ten times – more than he mentioned Afghanistan and Iraq combined. Daniel J. Weiss directs climate strategy at the progressive think tank Center for American Progress. He, for one, was not surprised by this.

WEISS: From his first day in office he’s made getting America running on clean energy a key part of his domestic, economic strategy. Clean energy investments will create jobs in the short run and lead to long-term investments in the new clean energy technologies of the 21st century. What you’re seeing is that a huge part of the media has written the obituary for action on clean energy and global warming over the last year. In fact, as Mark Twain might say, the reports of its death are greatly exaggerated.

YOUNG: The President did of course make numerous mentions of clean energy, he also gave this list of other energy sources he wants to develop: safe, clean nuclear power plants, and he mentioned making tough decisions about opening new, offshore areas for oil and gas development. This is the kind of stuff that if a previous President had said that it would send environmental groups into a tizzy. What’s going on here?

WIESS: Well, it would have sent people into a tizzy had President Bush talked about it because that’s all he would have talked about. One of the key goals of President Obama’s clean energy agenda is to reduce our use of foreign oil. Right now, one out of every five barrels of oil that we use is produced from a country that’s “dangerous or unstable” according to the State Department.

Senator Lindsey Graham, a conservative from South Carolina has made it clear that he bipartisan comprehensive clean energy legislation is going to include incentives to build more nuclear power plants as well as allow more offshore oil drilling. President Obama was signaling that those can be part of a comprehensive package that also invests in the wind and sun, invests in energy efficiency, and requires declining limits on global warming pollution.

YOUNG: So, from the environmentalist’s perspective, the unpalatable offshore oil and gas drilling is the necessary trade off to get to a climate bill. Would the climate bill be strong enough according to what we heard from the President to make it worthwhile?

WEISS: During the speech the President didn’t talk about any specific level of pollution reduction. However, as part of the Copenhagen negotiations he did put on the table a commitment to reduce U.S. global warming pollution by 17 percent compared to 2005 levels. That’s the same level that has been talked about as part of this Kerry, Graham, and Lieberman moderate, bipartisan global warming and clean energy legislation.

YOUNG: That’s Daniel J. Weiss with the Center for American Progress, a think tank closely associated with the administration. David Jenkins is with the group Republicans for Environmental Protection. Jenkins was impressed with the President’s emphasis on a bipartisan approach to climate change.

JENKINS: I thought that was huge and I think what the President said with his nod to nuclear and offshore drilling, it was clear that he was embracing of the bipartisan approach that Senators Kerry, Graham and Lieberman are working on with respect to climate change.

YOUNG: Now, lets talk a bit about the republican response. Virginia’s newly elected governor, Bob McDonnell, a republican, here’s what he had to say:

YOUNG: So, Governor McDonnell calls this a job-killing push, sounds to me like this is still a tough sell among republicans. 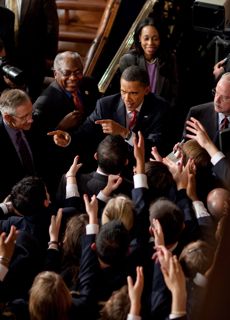 The 44th President leaves his first State of the Union and pauses to shake a few house pages' hands. (Official White House Photo by Chuck Kennedy)

JENKINS: Well, I mean this is the same thing we’ve been hearing since they adopted the moniker ‘cap and tax’ and started attacking this back in the spring. You know, to pass a climate bill through the senate we need a handful of republicans. We don’t need the majority to be behind it.

And I think a lot of this is political posturing; trying to find ways to criticize the democrats. So, I think it’s less of an indicator in terms of the prospects for getting something done than might appear on the surface.

JENKINS: Well, there’s been an effort to demonize cap and trade, which is really kind of funny given the fact that cap and trade has its origins back in the Reagan administration. And it was brought out by the first President Bush in response to the acid rain problem, and at that point it was environmentalists and democrats that were skeptical of it.

But, I think the President didn’t mention it because he understood the approach that Senators Graham, Kerry and Lieberman are taking, in that they’re keeping all options on the table. So, he doesn’t want to predispose the discussion to any one mechanism with respect to pricing carbon. But in terms of the President’s speech, the fact that he mentioned this so high up in his priority list and did so in a bipartisan manner, I think that really changed the mood and changed the prospects, and I think you’ll be hearing less from those would-be detractors in the future.

YOUNG: David Jenkins with Republicans for Environmental Protection. Thanks!

YOUNG: Reaction to the President’s speech was varied. The American Petroleum Institute was “encouraged by the President’s words” on oil and gas. Most mainstream environmental groups gave a thumbs up, but Friends of the Earth called Obama’s endorsement of nuclear and offshore drilling “a kick in the gut to environmentalists.” Ouch. What do you think? Let us know at comments at l-o-e dot org.