The Oyster is Their World 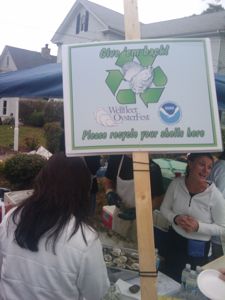 Oyster reefs play a critical role in protecting our shorelines from storms and pollution but they are the most threatened marine habitat on the planet. We’re literally eating the oyster out of house and home and destroying reefs in the process. Living on Earth’s Bruce Gellerman traveled to Wellfleet, Massachusetts to learn how scientists are experimenting with new ways to restore oyster reefs.

YOUNG: Think oysters and you think food. Raw or Rockefeller, fried or on the halfshell. But if you think oysters are just good for food or making pearls, think again. The lowly mollusks are critical for the economic and ecologic health of our oceans, shores and bays.

Oyster reefs were once dominant features in the world’s estuaries. Today, scientists warn, they could be nearing extinction. Living on Earth’s Bruce Gellerman tells us scientists are now experimenting with artificial methods to restore this vital marine habitat. His story begins, where the oysters’ ends.

GELLERMAN: The Union Oyster House in downtown Boston is the oldest restaurant in continuous service in the United States. It’s here that the toothpick was first introduced in America, and John F. Kennedy regularly dined in booth 18 upstairs. But the real history goes to the oyster – this is the house that the bivalve made famous. In colonial America oysters were a cheap, abundant staple of the working class diet. 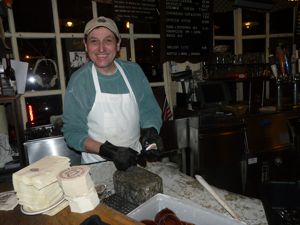 Daniel Webster was a constant customer at Union Oyster. He regularly bellied-up to the semi-circular bar and downed three-dozen oysters at a sitting. The famous bar is still here, and you can still see a whole of schuckin’ going on.

CHRISTEN: My name is Anton Christen. Originally I’m from Switzerland and what I do since about eight years I shuck oysters over here on the oyster bar.

GELLERMAN: How many oysters do you go through?

CHRISTEN: Usually we go through, probably on a Saturday, between two to three thousand pieces. I shuck a lot of oysters.

GELLERMAN: The oyster is Anton Christen’s world, and his weapon against the tough to open shell is a granite cobblestone. Christen grabs an oyster in his rubber gloved hand, inserts a blunt knife between the shells and taps the knife handle on the stone.

CHRISTEN: One little crack that’s the way we open.

CHRISTEN: Whenever I’m down in Wellfleet for the competition I’m bring my rock with me. 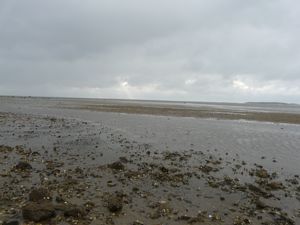 CHRISTEN: That’s not cheating, no.

GELLERMAN: Wellfleet, Massachusetts is where shuckers from around the world come to compete in the annual Cape Cod Classic.

GELLERMAN: This year, speed shucker William Chopper Young made Swiss cheese out of the competition.

GELLERMAN: When pilgrims first landed on Cape Cod, oyster reefs lined the shoreline and bays. Wellfleet harbor’s cold, clean, salty water, rich in plankton and micronutrients was the perfect place for oysters to spawn, and it still is.

PRESCOTT: Wellfleet is the location where the finest tasting oysters in the world are grown.

GELLERMAN: Bob Prescott can be forgiven if he’s a bit biased about Wellfleet’s oysters. He’s Director of the Wellfleet Bay Wildlife Sanctuary. Oysters are plentiful in Wellfleet, but these days as Prescott notes they’re not wild, they’re grown, cultivated in the briny bay. 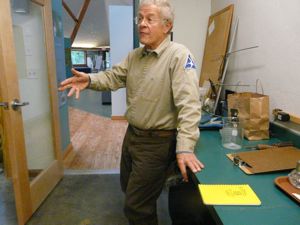 GELLERMAN: Today, 95 percent of the oysters that are eaten are farm-raised. Diseases, parasites and invasive species have taken their toll, but people are the main problem. We’ve consumed the wild oyster nearly to extinction because when we throw away their shells we’re literally eating them out of house and home.

On the seabed, oyster shells build up over generations to form reefs. A single female oyster can lay a hundred million eggs year, but without the hard, shell reef to latch onto, the fertilized oyster larvae die. No oysters, no shells; no shells no reefs. Boze Hancock says we’re rapidly losing one of the world’s most important marine habitats. 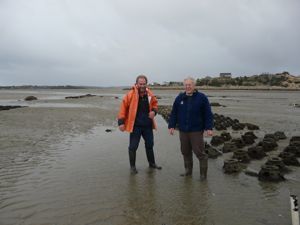 GELLERMAN: Boze Hancock is coordinating a project with The Nature Conservancy and the National Oceanic and Atmospheric Administration to restore the nation’s oyster reefs from Alaska to the Gulf of Mexico, from the Chesapeake Bay to Maine. Scientists call oysters a keystone species. Besides being a source of food, the oyster is an ecosystem engineer that provides critical environmental services.

HANCOCK: A good, big oyster will filter up to 50 gallons a day. So if you get a reef that’s made up of million of these, we’re talking 50 million gallons a day. A lot of water.

GELLERMAN: In addition to filtering millions of tons of agricultural chemicals that runoff into bays and harbors, oyster reefs protect our coastlines from storm surges and create a rich biologically diverse habitat. Bob Prescott of the Wellfleet Bay Wildlife Sanctuary:

PRESCOTT: What were looking to do is recreate the reefs that were here so that the baby fish, baby crabs, birds and wildlife that are associated with those reefs can come back.

[SOUNDS OF WALKING ON TIDAL FLATS]

GELLERMAN: Building an oyster reef not as simple as it sounds. An icy wind blows off Lieutenant Island as Bob Prescott and Boze Hancock walk across the tidal flat off Wellfleet harbor where they’re experimenting with different structures to start oyster reefs. 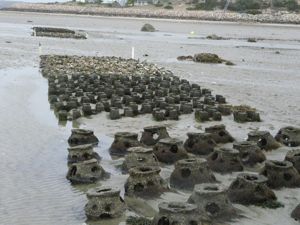 HANCOCK: Restoration science is not textbook stuff yet. It is not cookbook formula. We need to adapt ideas to local environments. Another issue out here at Wellfleet is ice; we got a lot of sea ice in winter. You can just picture how rough that is on a reef you’re trying to restore if you’ve got tides lifting up and lowering big sheets of ice all over the place, so that’s something that we need to work with and see how we can adapt our methods to suit.

[SOUNDS OF WALKING ON TIDAL FLATS]

GELLERMAN: The challenge: to design something low cost with the precise chemical composition and texture that tiny oysters will love to latch on to.

PRESCOTT: So you can start to see it from here. See all the rocks and then in between the rocks are all the treatments – there’s different treatments to see what the oysters are going to settle on the best.

GELLERMAN: Wellfleet’s tides move fast and far. We’re able to walk a few hundred yards on the mud flat when the tide is out to where volunteers have set up nine test beds spread out over two acres to test four different kinds of structures: Oyster mats, shells attached to biodegradable quilt material; Spat blocks, which are cement castles embedded with oyster shells; reef balls – round aggregates of concrete and shell; and culch, 50 pound mesh bags of clams and oyster shells saved from the past year’s oyster fest. 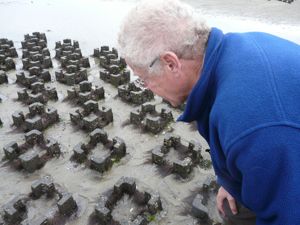 It took scores of volunteers like Sarah Martinez to haul the experimental structures to the tidal flat, and then do the painstaking task of keeping track of the tiny oysters as they grow.

MARTINEZ: And then we need to flip over every shell and we count and measure all the oysters that we find.

GELLERMAN: Any idea which ones work best, which one of these treatments?

MARTINEZ: Umm, we haven’t analyzed anything yet, and as Bob said we haven’t finished, but the cultch is doing really well.

MARTINEZ: The old shells are great.

HANCOCK: What we’ve got here is the first year of settlement on these blocks.

HANCOCK: What we hope to see in years to come is that becomes solid oyster; you can’t see the cement underneath it. And depending on the strength of the settlement and rate of growth it could happen in one year it could happen in three years, but I’ve certainly seen in other states where these kinds of structures have become completely covered in oysters to the point where you can’t see what they’re on. And that happens quite quickly.

GELLERMAN: Which is hopeful news for the Chesapeake Bay in Virginia and Maryland where the oyster population has decline 99 percent in just 15 years. The oyster reef restoration project there recently received five million dollars in federal aid. Again, Bob Prescott of The Wellfleet Bay Wildlife Sanctuary:

PRESCOTT: Our goal is to recreate or restore those same kind of habitats that the Pilgrims found when they were here. Whether we can ever get back to the natural diversity for this whole harbor, that’s not as clear but we believe because a reef is a physical structure that we can get these oysters to rebuild those reefs. But we want to eat oyster reef habitat and there’s just no way around that, and we believe you can, but at the same time we have to leave this habitat somewhere. We have to harvest it at a lower enough level that it continues to exist in big chunks in this harbor.

[MUSIC: The Zydepunks “A Fistful Of Oysters from …..and the streets will flow with whisky (The Zydepunks 2005)]

(Video Courtesy of Karen Given of WBUR)