Ian Cheney and Curt Ellis, the filmmakers behind the documentary, “King Corn,” are at it again. This time they’ve planted rows of vegetables in the back of a Dodge pickup to show that food can be grown just about anywhere. Living on Earth’s Jessica Ilyse Smith took a spin in the truck in Brooklyn.

CURWOOD: Rev up the engine; throw that truck into gear; and be careful - don’t shake the tomatoes off the vine! Such is the life of Ian Cheney and Curt Ellis, who take the term “truck farming” to a whole new level in New York City. Living On Earth’s Jessica Ilyse Smith took a trip to the Big Apple, to dig her fingers in the dirt and find out what - besides a tree – grows in Brooklyn.

SMITH: Brooklyn isn’t known as a hotbed of organic vegetable gardening, but then again neither are flatbed trucks.

CHENEY: We’re leaning on the back of my granddad’s old 1986 Dodge pickup truck, which is now filled with vegetables. 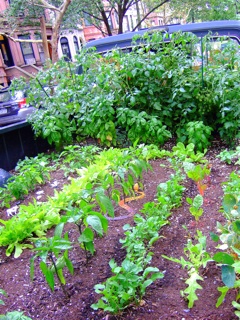 SMITH: Ian Cheney proudly shows off the neat rows of lettuce, arugula, herbs and tomatoes in his midnight-black flatbed. Plastic cows and chickens guard the hot peppers, and the dark brown soil makes a nice background for the growing greens.

CHENEY: Lots of trucks in Brooklyn, not a lot of farms.

SMITH: When Ian and Curt Ellis moved to New York they wanted to grow their own food, but space was an issue. So, Curt says they took a cue from others who were growing food in the city.

ELLIS: There’s essentially a green roof here in the bed of the pickup, and we’re using it to grow food.

SMITH: In fact, they sought out rooftop gardeners to find out how to garden with minimal soil.

CHENEY: The technology is pretty elegant and pretty simple. It’s a plastic membrane on the bottom of the truck that prevents the roots from winding down into the gas tank.

SMITH: On top of this membrane, a plastic structure that looks like an egg carton fills with water to hold moisture in the soil. When it rains, water that doesn’t fit in the small cups drains out of the truck. Then a layer of lightweight soil is covered by potting soil and compost.

CHENEY: A lot of this basil is ready to be picked.

[SOUND OF BASIL BEING PICKED]

SMITH: A man from the neighborhood stops by the truck.

CHENEY: Take a look at it, it smells really good.

SMITH: With a big grin, the passerby samples the locally grown basil.

MAN: Yeah, yeah it’s good when you put it on your meat.

SMITH: Neighbors are welcome to graze. And bags of fresh pickings are delivered when there is an ample harvest to people who sign up around the city.

CHENEY: This is community-supported agriculture, in which people buy a share of your farm ahead of time.

SMITH: Ian says that about 20 members subscribe to the CSA and get fresh salad-makings, herbs and wickedly hot peppers throughout the season.

CHENEY: It’s probably New York’s tiniest CSA, people pay $20, but it turns out they’ve been able to get a fair bit of produce out of the back!

SMITH: The urban farmers have found a way to grow a lot of vegetables in a truck bed that’s only five by eight feet.

CHENEY: This lettuce is really ready to be eaten.

[SOUND OF LETTUCE BEING PICKED]

SMITH: Ian picks a few leaves of lettuce and then jumps into the driver’s seat.

SMITH: Driving through the dense Brooklyn traffic, the farmers wave to people on the street who look at the farm with equal parts bewilderment and joy. Curt says this farm brings out the childish sense of wonder in almost everyone.

ELLIS: It’s kind of amazing how many people busily making their way to work, stop and smile and laugh when they see that there’s a farm growing on the back of a truck!

SMITH: On the side of the road a crew of construction workers notices Truck Farm drive by.

WORKER: We see this truck, we crack up…it’s unbelievable.

SMITH: Farming is not new to Ian and Curt. In 2004, the two teamed up to grow corn in Iowa and turned their experience into the documentary, King Corn. In Iowa, they grew one acre of conventional corn, using the techniques of modern industrial agriculture.

SMITH: During the filming, they were shocked to learn that their bounty would not end up directly on people’s plates, but instead would be processed into high fructose corn syrup for soft drinks, and fed to cattle.

SMITH: Now, the filmmakers by day—and farmers in their spare time—plan to turn their current adventures into another documentary to illustrate the creative ways people can grow food in the city. And they hope Truck Farm shows that healthy foods can be grown in neighborhoods where fresh produce is generally not found.

ELLIS: Right now, we’re in the Gowanus neighborhood of Brooklyn. It’s a pretty industrial neighborhood and there are no large supermarkets in Gowanus.

SMITH: Curt scans the landscape of used car lots and soda-selling corner stores and says he wants to encourage something different.

Neighbors have placed tiny plastic cows and chickens in the truck to graze between the rows of vegetables. (Photo: Jessica Ilyse Smith)

[SOUND OF TRUCK DRIVING BY]

CHENEY: The truckers have the best view, they can see down into the truck.

ELLIS: And they could have the biggest farms, you know? I mean look at that! That would be a beautiful farm!

CHENEY: A tow-truck farm would be good!

SMITH: Farming in the truck is fun, but Curt says he and Ian are also on a mission to improve people’s health by giving them more ways to get fruits and vegetables.

ELLIS: The CDC’s statistic is that one in three current first- or second-graders is on a path to develop Type 2 diabetes, and if we don’t change the way we eat, we’re gonna be in a serious problem in terms of healthcare in this country.

SMITH: They say Truck Farm can demonstrate that access to fresh produce doesn’t have to be a far-off dream.

CHENEY: I mean not that Truck Farm is going to feed the world, but it sure is an example of how we need to start thinking outside of the box about how we can feed the world in a different way.

ELLIS: Think inside the bed.

CHENEY: Think inside the bed of the truck.

SMITH: And, Ian says Truck Farm could even help the ailing auto industry…

CHENEY: The 2010 Dodge Truck Farm! I think that could be a real winner. It comes with a garden ready to plant, and think of the money that you’d save on groceries. I think this could be a real model for how the auto industry could rejuvenate itself!

SMITH: Pedal to the metal, this agrarian duo drives off through the New York traffic, hoping to inspire future urban farmers. For Living on Earth, I’m Jessica Ilyse Smith in Brooklyn.


Click here for videos, photos and more information on Ian, Curt and the Truck Farm.