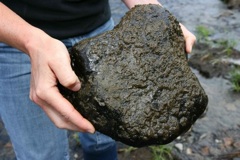 Algae often prefer waters that are warm, nutrient-filled and slow moving. But the algae called didymo, also known as rock snot, thrive in cold, clear rivers. The invasive rock snot is infesting trout and salmon streams up and down the east. As producer Murray Carpenter reports, scientists are trying to understand the unusual behavior of this invader.

CARPENTER: If the name rock snot is not bad enough, consider its appearance. It’s often described as looking like a sewage spill with wet toilet paper streaming in the water. And, strangely, it prefers clean, cold rivers like this one, flowing between New Hampshire and Vermont.

SMAGULA: We’re looking at the Connecticut River right now, and we are in West Stewartstown, New Hampshire, and this stretch has had didymo or rock snot in it for roughly two years now.

CARPENTER: Amy Smagula, a biologist with the New Hampshire Department of Environmental Services, walks to the river to pick up samples of the invader.

[SOUNDS OF WALKING IN GRASS]

SMAGULA: If you look across the bottom, the bottom looks a little fuzzier than it normally does. I don’t see the clean rocks that I would expect to see in the Connecticut River. Instead I’m looking at that brown, fuzzy, rock snot growth on top of the rocks.

CARPENTER: Smagula says the blooms are cyclical in some places, and high flows can scour rock snot away. But sometimes it forms thick mats on the riverbed, altering the river’s biological communities. And she says rock snot looks different than most algae.

SMAGULA: The little rock that I’m holding here, I’ve collected out of the river. And in fact, it is green and slimy. And that’s showing you an example of a common algae, a green filamentous algae. The other rock here is also coated with algae but it’s a little different. It’s brownish, and it’s stuck to the rock and it doesn’t feel slimy at all, and that is what rock snot is.

CARPENTER: While it’s native to the northernmost reaches of North America, Europe and Asia, didymo has expanded its range in the last decade, first becoming a nuisance in the western U.S. and Canada, then moving east. Invasive species typically spread like wildfire when they reach a new continent, as rock snot has in New Zealand. But in North America, biologists are wondering why didymo is taking off now after living quietly in the north for at least a century.

CARPENTER: Andrea Kirkwood, a professor at the University of Ontario Institute of Technology, says didymo is more puzzling than most invaders. She says it may have evolved into a form better adapted to waters that are warmer than those in its native range.

KIRKWOOD: It may be impossible to know for sure, because we don’t have specimens from over 100 years ago, to know for sure if it has changed. But we certainly know that it is behaving much more aggressively now in North America than it did in previous decades.

KIRKWOOD: We know that it does very well below dam spillways. So when we change a river’s flow, and control flow, we are actually creating ideal habitat, an ideal environment for didymo.

CARPENTER: When rock snot is in full bloom, Kirkwood says it can cover the riverbed like shag carpeting, smothering larval insects like caddisflies, mayflies and stoneflies that are food for trout.

KIRKWOOD: The food that they eat like to hang out, use the rocks as refugia, places to hang out and live in these river systems, so when you have shag carpeting, the didymo bloom, just covering the riverbed, it’s completely changing the habitat structure.

CARPENTER: Biologists say fish may be able to shift their diets to the midges and worms that are more abundant in areas of didymo blooms, and are trying to understand how rock snot might affect fish and their spawning habitat.

CARPENTER: Nobody knows how rock snot got here to the Connecticut River, but biologists suspect it hitched a ride on an angler. Didymo is a diatom, and its tiny cells can stay viable for weeks on the felt soles of wet waders. It’s already shown up in other eastern trout waters—like Vermont’s Mad River, New York’s Batten Kill, and Maryland’s Gunpowder River.

Joe Norton coordinates habitat restoration on this stretch of the Connecticut River for Trout Unlimited. He says it’s possible to slow didymo’s spread.

NORTON: Not only fishermen, but all river users just need to get in this mindset of cleaning and disinfecting their equipment after they are done.

CARPENTER: River users can disinfect their gear by scrubbing it with hot, soapy water, or spraying it with a bleach solution or the herbicide diquat. When leaving the river, Norton pumps up his spray bottle… 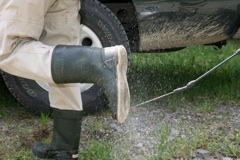 CARPENTER: … and sprays down his waders.

CARPENTER: But biologist, Amy Smagula, says something that makes controlling its spread difficult is that before it takes over a stream, rock snot may be lurking inconspicuously in the water.

SMAGULA: And that’s the scariest part of it is, people don’t know it’s there, and they could easily transport it from river to river. So it’s sort of a silent invader.

For Living on Earth, I’m Murray Carpenter, on the Connecticut River in northern New Hampshire.