The Joshua Tree At Risk 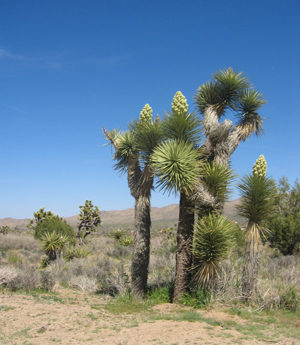 The Joshua Tree, quirky and beloved park mascot, is struggling to survive.

Nitrogen oxides - greenhouse gases from Los Angeles’ industrial ports and diesel truck exhaust - are making their way into the soils of Southeastern California. Living on Earth’s Ashley Ahearn went to Joshua Tree National Park to find out how air pollution is changing the desert ecosystem from the ground up.

GELLERMAN: The Joshua Tree looks like something out of Dr Seuss. It’s got spiny pom-poms on the tips of its curved branches. One early explorer called it ‘the most repulsive plant in the vegetable kingdom.’ But it’s got its own national park in Southern California. Some researchers predict that climate change will force Joshua Trees North out of the park. 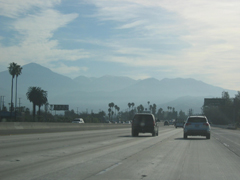 Route I-10 is a major trucking route from the L.A. industrial ports to the rest of the country. Nitrogen oxides from diesel truck fumes act like nitrate fertilizer when they get into the soil.

However, the tree faces a more immediate threat: air pollution, specifically nitrogen oxides from vehicles that act like a fertilizer. Living on Earth’s Ashley Ahearn hit the road to Joshua Tree National Park to learn more.

AHEARN: This is Route 10 East, coming out of L.A. headed towards Joshua Tree National Park. Alright, here we go, let’s get this guy. C’mon, c’mon.

AHEARN: Yessssss. Pretty much here following the trail of Nitrogen, among other greenhouse gases, that travel from the L.A. industrial ports out to Joshua Tree and end up deposited in the soil. And that’s what Dr. Edie Allen of UC Riverside studies.

AHEARN: About an hour later, I’m in the desert – Pinto Basin, Joshua Tree National Park – with Dr. Edie Allen. This is one of the sites where she’s studying what happens when nitrogen from air pollution gets into the soil. But right now, she’s talking plants – maybe one of her favorite things to do. 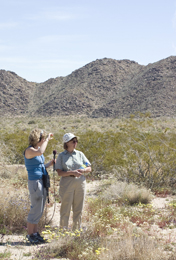 Dr. Edith Allen of University California Riverside stands with reporter Ashley Ahearn near one of her research plots in Joshua Tree National Park. Her team monitors nitrogen levels in the soil to understand their impacts on plant life.

ALLEN: We’ve got a desert dandelion, we have a facelia, we’ve got camesonias...

ALLEN: Yeah they’re all over.

AHEARN: What kind of lizard? Do you have any idea?

ALLEN: No, I have to admit, I’m just a hardcore botanist. (laughs)

AHEARN: Actually, Dr. Allen started out as a restoration ecologist, someone who researches how to repair polluted ecosystems. But it was in her research plots at UC Riverside, about an hour west of Joshua Tree National Park, that she realized she’d have to look to the sky to explain what she was seeing on the ground.

ALLEN: I found out that the nitrogen in the soil was so high that the only thing I could grow was weeds. I couldn’t grow the native plants, and so all of a sudden I had to become an air pollution ecologist too. 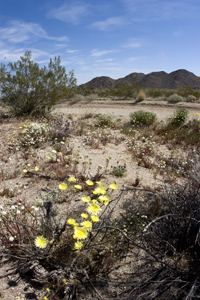 AHEARN: The nitrogen levels in Dr. Allen’s research plots were 15 to 30 times higher than the levels in an undisturbed ecosystem, and that Nitrogen was coming from air pollution moving east from the L.A. Basin.

In most places, nitrogen gets into the soil when rain comes down from clouds contaminated with nitrogen oxides. But it doesn’t rain that much here. So instead, Nitrogen oxide particles and ions settle on plant leaves during the dry season…

ALLEN: … and then the next winter rainy season those particles, or ions, are washed into the soil, where the plants can take them up when they start to grow, so it’s almost like adding a dry form of fertilizer.

AHEARN: Desert plants aren’t used to getting this extra nitrogen. But plants from elsewhere, grasses in particular, do really well with a little help in this dry climate.

ALLEN: The grass that I’m talking about is this one. This is called Mediterranean split grass, and it’s invaded our desert areas. It’s in the Mojave Desert. It’s in the Sonoran Desert. It’s become quite widespread. 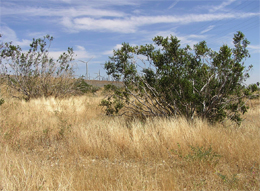 AHEARN: And it’s changing the way the desert looks.

Turns out, there’s a scientific name for these isolated oases of cover in the desert. Dr. Allen says underneath each shrub…

ALLEN: … is what we call an island of fertility. As I bend down here to pick up these grasses you can see that most of the plant material underneath the shrub is actually this Mediterranean split grass. 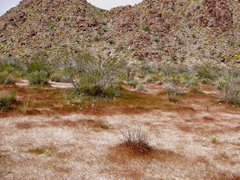 One of Dr. Allen's research plots in Pinto Basin. The dark red area marks new invasive growth where Dr. Allen applied the same amount of Nitrate fertilizer that a farmer in Ohio might apply to his wheat field. (Photo: Dr. Edith Allen)

AHEARN: Dr. Allen has found that because of higher levels of nitrogen in the soil, split grass is getting all the nutrients it needs to not only take over these islands of fertility, but to spread into the sandy parts in between, where once there were only scattered wildflowers.

So, for example, normally when lightning strikes a creosote bush in the desert, the fire burns out in that one bush’s island of fertility. But Mediterranean split grass fills in the gaps with fire fuel, allowing the fire to rip unimpeded from island to island.

The average size of a fire in Joshua Tree National Park today is 25 times what it was in the late ’70’s. Joe Zarki has worked for the Park Service here for the past 13 years. He remembers the Juniper Flats fire of 1999 – the biggest in park history.

ZARKI: That was a Memorial Day weekend fire, which really complicated the fire fighting efforts because the park was very busy, so we had to do an emergency evacuation of the entire western side of the park. So these fires that are caused, or at least the relationship with these fires and exotic grasses, are starting to have big time impacts on people as well as on the park and the ecosystem itself. 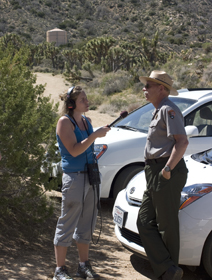 AHEARN: Zarki says the changing soil composition and plant life here are making it a lot harder for the charismatic park mascot to survive.

ZARKI: Thousands of Josh trees were burned in these fires and I think, you know, one of the concerns is Josh trees are a long lived plant so what we may be seeing is a pattern where they get burned up again before they ever reach a full mature size.

AHEARN: There’s also evidence that after fires, small mammals are eating the next generation of Joshua Tree seedlings.

But there’s some good news. Dr. Allen’s research suggests that if there were less nitrogen pollution in the air, nitrogen levels in the soil could go back to normal, allowing native wildflowers and plants to replace the Mediterranean split grass.