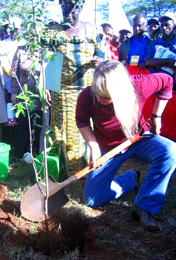 Jody Williams plants a tree during a Greenbelt Movement ceremony at the 2007 World Social Forum in Nairobi, Kenya. (Courtesy of the Nobel Women’s Initiative.)

Two women who have won the Nobel Peace Prize urged U.S. lawmakers to act on global warming. Wangari Maathai and Jody Williams say the women of the world could suffer the most from climate change and should be a part of the solution. Living on Earth’s Washington correspondent Jeff Young reports.

GELLERMAN: It’s Living on Earth. I’m Bruce Gellerman. Wangari Maathai won the 2004 Nobel Peace Prize for helping to reforest Africa. Jody Williams got her Nobel in 1997 for trying to rid the world of land mines. Now as Congress considers a climate change bill, the two Nobel laureates visited lawmakers on Capitol Hill to demand action on global warming. Living on Earth’s Jeff Young spent the day with the Peace Prize winners and has our report.

YOUNG: Wangari Maathai’s seen her corner of the world suffer through drought, famine and political upheaval, and she fears East Africa could see much more with global warming. With each disaster the U.S. sends aid. Maathai’s grateful for that, but also a bit puzzled.

MAATHAI: Wouldn’t it be even better to participate in supporting measures that would prevent those disasters, and not always come when one is in misery, to say, ‘I see you are dying you are on a deathbed. What can I do to help you?’ It would have been much better to help that person stay alive. And that’s what we are trying to tell the United States of America. Can you help the world before it is in the – in emergency room? (laughs) 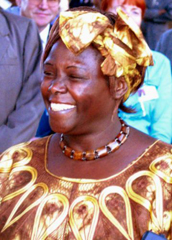 YOUNG: Maathai and fellow laureate Jody Williams helped form the Nobel Women’s Initiative to encourage that sort of thinking on things like climate change. They want Washington to have the developing world in mind as they debate what to do about global warming. Williams sees it as a national security issue. Her work to ban land mines made her more sensitive to the root causes of conflict.

WILLIAMS: I think if we’re going to be honest we have to stop thinking that security is just about bigger weapons, you know, a more weaponized state, weaponizing out in space. We have to start thinking about what is really affecting our security on the planet. It’s global warming, it’s, you know, pandemics, it’s now the global food crisis. All of that contributes to global insecurity which can fuel war.

MAATHAI: One of the reasons why we want to appeal to the United States of America is that as long as the United States of America doesn’t take its leadership position, the rest of the world hides behind her. And wants to say, ‘Well, she is the greatest polluter. She’s not doing anything. Why should I do something?’ And so we think that it’s very, very important for leadership to come from here for it to appear like the greatest polluter is also doing her part.

YOUNG: Note the pronouns ‘she’ and ‘her.’ There’s an emphasis on the feminine here. Matthai and Williams argue that the world’s women must play a greater role in taking on climate change, both because women have much to offer and they might have the most to lose.

MAATHAI: When there is drought, when there is crop failure, it is the women and children who are the most adversely affected. Indeed.

WILLIAMS: But I’d like to add just when I led the UN mission on Darfur, I was in one of the refugee camps; I think there were 13,000 Darfuri refugees in the camp. It was women and daughters who had to trek out to get the water to bring back to the camp for their families. Why did the women have to go? Because if the men went they’d be killed. The women go the only thing they have to face is rape. So I mean we have to really start thinking about all of the implications of desertification, water, etc., etc.

WILLIAMS: Before we build those damn reactors and then we have to deal with all the pollution, the radioactive waste etc., we need good governance, which means being honest about what really goes into producing nuclear energy and stop calling it clean.

YOUNG: Williams and Maathai urge more support for renewable energy and aid to developing nations to adapt to a changing climate and prevent deforestation. Maathai says programs to protect forests have stalled due to complications of carbon offset trading schemes and distrust among governments.

MAATHAI: It seems like we are waiting to be sure that we are doing it right. But as we wait, the damage continues. And I think that we need to encourage the business sector to take some bold steps – some risks – so that we can begin to see what works and what doesn’t work.

YOUNG: It’s a big challenge. But these women have met big challenges by starting small. Williams says her campaign to ban landmines worked through a series of modest, achievable plans that built momentum. Maathai’s Green Belt Movement in Kenya started even simpler: one tree at a time.

YOUNG: The Nobel women say they’ll keep at it until that attitude takes root here in the capitol as well.

For Living on Earth, I’m Jeff Young in Washington.