The demand for organic food is growing, and U.S. sellers of fish and seafood want to jump on the bandwagon and certify their products organic. Currently, there are no organic standards for seafood but that's about to change. As Rachel Gotbaum reports, setting regulations for healthy fish is no easy process. (Photo: OceanBoy Farms)

CURWOOD: From the Jennifer and Ted Stanley Studios in Somerville, Massachusetts, welcome to Living on Earth. I’m Steve Curwood. The organic food industry is the fastest growing segment for food sales in the U.S., rising by 20 percent a year. Produce, poultry, dairy and meat can be certified organic by the U.S. Department of Agriculture. And now, purveyors of seafood are trying to cash in and get their products certified organic, as well. But, as Rachel Gotbaum reports, creating organic standards for fish is a complicated matter.

GOTBAUM: Though it looks like an ordinary farm with sprawling acres of greenhouses, OceanBoy Farms in Clewiston, Florida is different. For one thing, it’s the only farm in the country where shrimp are grown inland. There’s also no polluting run-off; the water in the 24 manmade ponds where the shrimp are raised is treated and recycled.

GOTBAUM: On a spring afternoon, vice president of production Michael Mogollon drives his black truck around for a tour of the 900-acre property.

MOGOLLON: These paddle wheels are important because it moves the water in a circular motion and concentrates whatever waste are generated in the pond toward the center drain.

GOTBAUM: All visitors must wear protective white lab suits to keep from contaminating the shrimp stocks. That’s because these shrimp are not treated with antibiotics or other additives. If they get sick, the whole batch must be destroyed. And they’re fed what Mogollon calls 100 percent organic feed made from tilapia cultivated on the farm.

GOTBAUM: Inside the greenhouse, millions of tiny translucent shrimp are growing in large tanks that look like bathtubs—the water is algae green.

MOGOLLON: These little lines that you see—this is the vein of the shrimp, what most people like in an adult shrimp to take out. That’s the intestine and you’ll see that all these animals have full guts, which means they’re fully fed. Part of that food is the organic formula that we give them.

GOTBAUM: OceanBoy Farms is the only seafood company in the United States to receive USDA organic certification. The owners hope that their 50 million-dollar business investment will pay off because they’re banking on consumer demand for organic products continuing to grow.

GOTBAUM: Nowhere was that demand more obvious than at the International Seafood Show held recently in Boston. This is the largest trade show for seafood in the U.S. For the first time in its history, among the hundreds of fishmongers from around the globe, a handful were selling organic products. The largest seller is Emerald Organics, a two-year-old company which markets fish certified organic in Europe and South America. Michael McNichols runs the company and was showing off his products to a buyer from China.

MCNICHOLS: The one in the back is crocker; that’s farmed in the Mediterranean. In front of the cod is salmon, which is farmed in Ireland. In front of that is sea bass and seabreem. We have number of other products, organic sturgeon and caviar, which are farmed in Spain.

GOTBAUM: At the other end of the hall, a buyer from one of America’s largest food companies gave his pitch to the salespeople at the OceanBoy Farms Organic Shrimp booth. Bill Bush is a purchasing manager for Nestle USA.

BUSH: Our consumer is, especially in the Lean Cuisine side, they are health conscious. And Nestle’s moving toward a wellness company. We don’t even want to be called a food company anymore; we’re a wellness company, health and wellness.

GOTBAUM: It seems almost every company is interested in getting in on the wellness craze. The buzz about organics doesn’t surprise Howard Johnson. He runs his own seafood marketing and research firm called HM Johnson and Associates.

JOHNSON: More and more you’re gonna see in these trade booths words like wild, natural, organic, sustainable. People are starting to get the message that there’s a market for this. And I’ve been in this business for 30 years and that’s sort of a sea change. It’s exciting for the industry because the organic food market in this country is growing by 19, 20 percent a year--has been for the last five years. So the seafood people see that and they would like to become a part of that and the retailers and consumers would also like to see that.

GOTBAUM: There are still no organic standards for seafood in the U.S. OceanBoy Farms received its certification under the livestock rules and the USDA is currently challenging that decision made by one of its contracted certifiers. Currently, U.S. consumers can buy fish that has been certified organic from Europe and other countries. But that worries some people.

GOLDBURG: The upshot is that when consumers in this country buy seafood that is labeled organic in a grocery store, they really don’t know what they are getting,

GOLDBURG: The organically certified fish that’s imported may be fed diets that are relatively high in contaminants like PCBs and dioxins. So there isn’t even a guarantee that you are getting a healthy product when you buy so-called “organic seafood” at a store in the United States.

GOTBAUM: Goldburg helped the government develop its current national organic standards. She says certifying farm-raised or even wild fish is much more complicated and expensive than organic livestock or crops.

GOLDBURG: If you have a farm, you own that piece of land, you can control what goes on in that piece of land. For the most part, you can create an organic system that most people would be comfortable with. But it’s different in the ocean which is held in the public trust. It’s everybody’s and so no individual who is farming a fish in the ocean has nearly as much control over what goes on.

GOTBAUM: Goldburg worries that politics and market pressures to certify certain species of fish will end up watering down organic standards. For example, organically raised livestock must be fed an organic diet. But salmon are carnivores and are fed on other ocean fish that may be contaminated. Would salmon farmers be willing to overhaul production methods and invest in new technology needed to create organic fish feeds? Current organic standards also call for strict waste and reuse protocols. Most farm-raised fish is grown in nets out in the ocean. How would fish farmers recycle waste and keep pollutants from entering the ocean’s ecosystem? Those are questions that remain unanswered.

GOTBAUM: On a recent afternoon, the Whole Foods market in Swampscott, Massachusetts is quiet. There are a few people at the fish counter where farmed and wild fish from waters near and far are displayed.

WOMAN: Hi. Can I get a pound of the haddock? Can you take the skin off?

GOTBAUM: Whole Foods is the largest retailer of organic food in the U.S. The market chain’s fish sales grew by 15 percent last year—but none of the seafood was labeled organic. Dave Pilat is the northeast regional seafood director for Whole Foods. He says until USDA standards are developed for seafood, placing an organic label on fish is confusing to consumers.

PILAT: When organic seafood started coming out into the marketplace we took a look at the different certifying bodies and it was easy to notice that the certifying bodies in Europe all had different standards. So we said for now it would be fairest not to use the word “organic.”

GOTBAUM: In 2003, at the urging of Alaska lawmakers, Congress gave the USDA authority to develop organic standards for wild fish. Alaska sells 95 percent of all wild salmon in the U.S. Recent reports that farm-raised salmon can be contaminated with PCBs and other toxins gave the Alaska fishing industry a boost and sales of wild salmon reached 235 million dollars last year. Alaska fishermen don’t want to lose that market edge and are pushing to get their products certified organic, too.

WOLF: Wild salmon is exactly what consumers are thinking of when they think of the word “organic.”

GOTBAUM: Bill Wolf is a legislative assistant for Senator Lisa Murkowski, a Republican from Alaska.

WOLF: A wild salmon that is spawned in absolutely pristine fresh waters swims out to sea in the cold waters of the north Pacific. It is not picking up any contaminants and swims back into the same pristine stream to spawn and is caught at the absolute peak of condition. That’s the most natural product that I can imagine from anywhere in the world and yet the organic food industry says, ‘oh no, you can’t use our label.’ 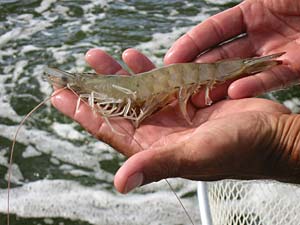 GOTBAUM: Wolf says in order to give wild fish and some types of farm-raised seafood an organic label, new standards may have to be adopted. And that’s exactly what environmentalists and those in the organic community worry about. Whole Foods fish buyer Dave Pilat.

PILAT: If it’s decides that wild fish can also be determined organic, I think that would set a dangerous precedent. I think folks, when they buy organic, it’s all about the source. They want to know where it came from, what feed, what’s in the feed, how it was raised and with wild fish I think it’s almost impossible to know. Fish can swim for thousands of miles. Fish are migratory so to label any seafood organic could be, I think at the least a tricky situation.

GOTBAUM: That’s one of the tricky situations the USDA is just now beginning to grapple with. The agency is currently assembling a task force to begin work developing organic standards for aquatic animals. Consumers can expect to find fish certified with the USDA organic label in markets sometime next year. For Living on Earth, I’m Rachel Gotbaum.

CURWOOD: You can hear our program anytime on our website, or get a download for your iPod or other personal listening device. The address is livingonearth dot org. That’s livingonearth dot o-r-g. You can reach us at comments@loe.org. Once again, comments@loe.org. Our postal address is 20 Holland St., Somerville, MA, 02144. And you can call our listener line at 1-800-218-9988. That’s 1-800-218-9988. CDs, tapes and transcripts are $15.