Grazing up the Land?

For the first time in a decade the federal government is revising rules about how ranchers graze their cattle on public land. The changes tend to allow ranchers more leeway and make it harder for range land officials to order cattle off when they perceive cattle-caused damage. But beneath the changes producer Clay Scott reports a deep debate over the wisdom of public grazing persists.

YOUNG: It’s Living on Earth, I’m Jeff Young. Across the American West, thousands of ranchers graze livestock on public land. The ranchers pay fees to use the land, and many ranch families have been doing so for generations. Now, the Interior Department’s Bureau of Land Management, the agency in charge of millions of public acres, has new regulations on grazing. The BLM says the new rules will preserve open space while keeping ranchers on the land and rural communities intact. Some scientists and environmentalists fear those new rules will harm rare species and water quality. Some wonder whether livestock belong on public lands at all. Clay Scott reports.

SCOTT: Cattle have grazed the ranges of the West for over 150 years. It’s hard to find a landscape here that hasn’t had cattle on it at one time. Much of this rangeland, over a hundred and sixty million acres of it, is federal land administered by the BLM. These lands are largely sage-steppe, a landscape that for a long time was overlooked and underappreciated. In fact, it was considered unsuitable for anything but grazing. Now it’s increasingly being recognized as both extremely diverse in plant and animal life, and extremely fragile. This growing biological understanding means ranchers and their grazing practices on these lands are coming under greater scrutiny. Nathan Finch is a southwest Montana rancher. 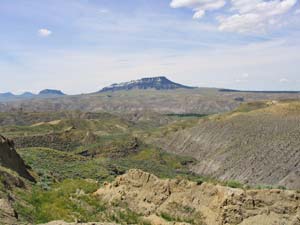 The view from Hugo Turek's ranch looks out to Square Butte and the Highwood Mountains. (Photo: Clay Scott)

FINCH: The pictures you see, and the people that say that, you know, public lands are, you know, all grazed down to the dirt. Well, here you go, it’s not! You know? I mean, it’s really not.

SCOTT: Finch takes me on a tour of his ranch, both his private land and his BLM allotments. To my eye, the sage brush and the grasses beneath it look vibrant and healthy. The rolling sage flats rise to meet the Big Hole Divide mountains in the distance. This is crucial habitat for threatened sage grouse, and a tiny creek running through the place holds rare west slope cutthroat trout. Finch says he grazes conservatively, and that he’s careful not to leave his cattle for too long on one pasture. He resists the notion that any outsider might be able to take care of the land better than he is doing.

FINCH: I try, as best I can, to be open-minded, and try to find the things that work for us. And I know that a lot more guys, to be successful in ranching, are having to do the same thing. I don’t think you can just keep doing it the way grandpa did it. And I think there were grazing abuses in the past, and I’m sure there are still some now, and I’m sure some people would say the way I’m doing is a grazing abuse. But, I mean, I’m not going to try to answer to those people.

SCOTT: The real pressure that ranchers face is economic, and with that comes the threat of subdivision. Many ranchers say, and westerners agree, that the phenomenon of subdivision is changing the landscape and culture of the West more rapidly and dramatically than any other factor. Baby boomers by the thousands are buying up ranchettes for second homes or for retirement in every western state. It is partly to address these pressures, and help keep ranchers on the land, that the Bureau of Land Management has eased some restrictions on public land grazing. The BLM would not be interviewed for this story. Instead, spokesman Tom Gorey read this statement.

GOREY: Regarding the grazing regulations that we’re developing, we’re not going to comment on litigation which has been filed. We will say though that we’re in the process of finalizing the new rules. When that job is done, we expect a rule that’s going to be good for the land, good for people. It reflects our commitment as an agency to multiple use management of the public lands, of which grazing is a part. And we think when all is said and done, this is going to ensure the health and productivity of the public lands, both now and in the years to come.

SCOTT: But the BLM’s new grazing regulations have proven to be controversial. Two BLM biologists who voiced concern about the revised rules quit in protest, saying their analysis had been turned on its head, and that the new rules could be harmful to wildlife and water quality. Tom Lustig, an attorney for the National Wildlife Federation in Boulder, Colorado, echoes those concerns.

LUSTIG: Under these regulations, the right of the public to participate in that, and the obligation of the Bureau of Land Management to notify and consult with the public on many critical, on-the-ground decisions, is eliminated.

SCOTT: Up till now, BLM experts have had the authority to make on-the-spot assessments of range health, removing cattle if they saw a piece of land or stream was being damaged by grazing. Now they'll be required to collect extensive data.

LUSTIG: Under the new regulations the range manager is going to have to set up a monitoring program, and to periodically take data, perhaps over months or years – to back up his determination that, yeah, this stream is completely beat up, and it’s beat up by cows. What the new regulations do by inserting this monitoring requirement, is create a very high hurdle – perhaps insurmountable in some cases – for BLM to actually enforce these performance standards for healthy rangelands.

SCOTT: The result, says Lustig, is that management of the BLM rangelands will fall primarily to ranchers.

LUSTIG: I don’t dispute that ranchers are often good stewards. What I’m concerned about is that they have a narrow interest, and by law, the Bureau of Land Management is required to manage these federal lands for multiple uses. And those multiple uses may include things that have nothing to do with livestock grazing.

SCOTT: While the BLM rules may represent a move toward making life easier for public land ranchers, another trend is running in the opposite direction. For many critics of public land grazing, the harmful impacts of cattle on arid rangeland are beyond dispute. Debra Donahue is a professor of public land law at the University of Wyoming. She’s also the author of ’The Western Range Revisited,’ a book in which she advocates removing livestock from public lands.

DONAHUE: We need to keep in mind, I think, that ranching is not going to end if ranching on public lands ends.

SCOTT: When cattle are grazed on arid land over a period of time, she says, the impacts on the land and on native biodiversity can be severe and lasting.

DONAHUE: You keep stressing the land, you keep disturbing it, and pretty soon you reach what the ecologists will call a threshold. And that’s a point of no return essentially. The conditions, the vegetative and soil conditions in that spot will change irrevocably, or at least irrevocably under natural processes, meaning you can remove the cattle, it will never go back to the way it was or could be or should be.

SCOTT: But there is no consensus when it comes to the science of range management. Some specialists say grazing can be beneficial to diversity. Jim Hagenbarth is a fourth generation rancher with BLM allotments in both Montana and Idaho.

HAGENBARTH: For a biologist or a hydrologist to go out on a piece of range, and just blindly say that there is a problem, and livestock are the problem, and they have to be removed immediately, is not good range science. There’s a lot of things going on out there, including drought, wildlife, that determines the condition of the range site, and so you don’t make snap decisions out there. 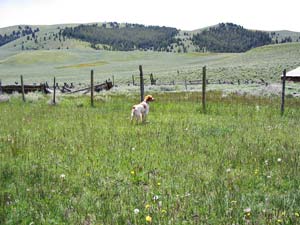 SCOTT: Hugo Turek is a Montana rancher and former sociology professor whose ranch is a haven for wildlife. His cattle graze on both BLM and private land on the edge of the badlands south of the Missouri River. This is a rich and diverse landscape, with flat grasslands plunging down into steep, sage-covered breaks, a year-round stream lined with cottonwoods and willows, and, in the distance, Square Butte and the Highwood Mountains. There are elk here, deer and antelope, and countless species of birds, plants and small mammals. Turek sees no contradiction between managing the place for wildlife and managing it for cattle.

TUREK: I don’t really differentiate between my land and the BLM land – it’s all one landscape. When you look out across this place, you’re looking across a landscape. And by protecting my place, I’m protecting the BLM, and vice versa. And so there’s a mutual benefit, and these boundaries are artificial. They really are.

SCOTT: Though critics say public land ranchers could survive without federal lands, Turek says he needs them for his economic survival. With that need comes a deep respect.

TUREK: My view of the public lands is, we ranchers have to share it, we have to learn that this is really the public’s land, not mine. I have the privilege of grazing out here, and I have the privilege of looking across this landscape every day. And it’s difficult to look across this and say, you know, ‘this isn’t mine. This belongs to the public.’ And, but once you can say that to yourself, once you can accept that, and realize you’re out here as a privilege and not a right, it makes it a lot easier to deal with. We have to learn to share with the public. If we don’t, we’re not going to be here. There’s a lot more public than there are us. And I think we can both be on that landscape, and both use it.

SCOTT: The conflict over the public rangelands of the West is not likely to be resolved any time soon. It is clear, however, that the public’s awareness of these lands is growing, and that, increasingly, the public will demand a say in how they are managed. For Living on Earth, I’m Clay Scott in Montana.