Space engineers are looking for new ways to power spacecraft, especially once they’re launched into orbit. Astrophysicist Neil deGrasse Tyson talks to host Steve Curwood about advances in space propulsion technology, including the recent Cosmos 1 mission that was designed to use sails powered by the pressure of sunlight. Artist image of Cosmos 1 in flight, reflecting the Earth.

CURWOOD: Since the beginning of human time, people have traveled the waters of the world by drifting and paddling. But then, centuries ago, when European explorers set out to travel the globe, they mastered a comparatively new technology, riding the wind. Now, once again, riding the wind is a new frontier of technology, but this time for space travel. The modern day equivalent of oars and sweat is the chemical rocket, which we use to launch spacecraft like the shuttle into orbit, and then for the most part we drift. But last month, a privately funded mission, Cosmos, was launched, this time with sails designed to catch the solar wind. The expedition failed when a launch vehicle failed to fire properly. Yet the prospect of solar sailing and other new ways to power space craft still intrigue scientists.

With me now is Dr. Neil deGrasse Tyson, an astrophysicist, director of New York’s Hayden Planetarium and a regular contributor to our program. Neil Tyson, welcome back.

TYSON: It’s always great to be back. Thanks for having me.

CURWOOD: Solar sail technology is pretty amazing. So, just how does a sail work when it’s attached to a spacecraft? 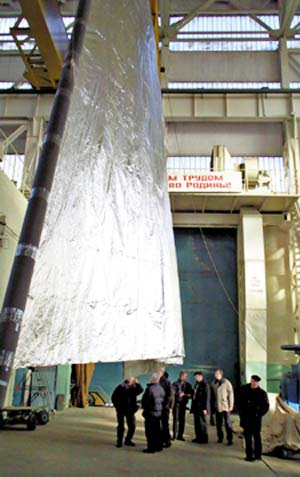 Engineers watch a zero-gravity simulation of the sail deployment of Cosmos I and test its mechanical configuration. This photo was taken in January 2001 at NPO Lavochkin, the world's largest manufacturer of robotic spacecraft. (Photo: Louis Friedman, The Planetary Society ©)

TYSON: The Cosmos 1 sail is, I don’t know if anyone has ever seen pictures of it, but in a fully deployed state, it’s a hundred feet across with its sails spread out like a daisy, each were maneuverable so you can change the angle just the way a person sailing on a sailing ship would change the angle of their sails. Of course, you have to be able to do that to control which way you’re going, but this technology which was simply large mylar, reflective sails was, tended to be a demonstration of the pressure of sunlight.

CURWOOD: Yeah, so what is the pressure of sunlight? I mean, people think of outer space being just space, being a vacuum. I mean, that’s what we learned in elementary school--that there’s nothing there, but there is something there apparently.

TYSON: Yeah, well light moves through space. Of course, we see the sun from earth so that means the sunlight reached us through the vacuum of space. So what you do is you exploit that fact and you calculate how much pressure, how much little impulse you’ll get from each of the photons of light that comes from the sun. And the sun emits a lot of photons of light and as each photon strikes the reflective sail and bounces back off, that little recoil of the photon forces a response to the spacecraft and pushes it into another orbit. So the way you do this is, you don’t get into orbit around earth and then line up your sails and then head towards Mars, that’d be too easy actually if that’s all it was. (laughter) The way this works is, the energy from the sun, you keep pitching the sails in such a way that the sunlight pushes on your craft into higher, and higher, and higher orbits… until you get an orbit that’s so large that it intersects the orbit of Mars and then you just go to Mars or you go to the moon or whatever would be your destination.

So the drawback is it’s slow. If you wanted to do this and get to the moon, it would take you a couple years, whereas ordinary rockets that we know and love will get there in three days. So, it might not be your first choice of propulsion for astronauts, but maybe you have a supply ship that carries food of high shelf-life (laughter). You know like rice, or breakfast cereals, things like that. You can send that long in advance of your trip and land where you need it to land and then you come in on your few day trip and there you have it. And so it’s an important auxiliary tool for the exploration of space.

CURWOOD: Now, the standard technology to get something to space is to use chemical reactions, burning either liquid fuel or solid fuel or whatever. But once in space there are no gas stations up there, Dr. Tyson. So, how do we keep our spacecraft first powered up to handle just all the electronics that we have on board to do the things that they do?

TYSON: That’s an excellent question. We take for granted that when you want to drive across country, that you don’t have to carry a tanker truck with you to give you all of your fuel because there are places to stop and load up.

CURWOOD: You just have to take lots of money with you these days.

TYSON: Lots of money to buy the fuel at three dollars a gallon or whatever it’s costing in some parts.

TYSON: And so, without fuel stations, filling stations across the solar system or the galaxy, you have to bring all the fuel you’re going to use with you and hence this tremendous pressure on the frontier of space exploration to come up with an efficient fuel source and chemical energy is just not efficient. You might remember the Saturn 5 rocket from the 1960s. It was 32-some odd stories tall and waaaaaay at the top there’s a little place, that’s where the astronauts were, and all the rest of what they were sitting on, is basically fuel tanks just to get them to the moon and back. So this is a problem and it’s a challenge and so you have to be creative about this. So, one way is you have solar panels, that gives you sort of electricity on board, that’s what the space station has, but now if you want propulsion, you’ve got to be even more clever than that and the most efficient means of propulsion we know involves getting energy from nuclear reactors. Of course, that’s the n-word and there’s a lot of knee-jerk resistance to putting nuclear reactors in space, but let me just say that if you can imagine that you have people working on this to make it a safe technology so that we can continue our exploration, there’s a whole branch of NASA that’s tasked with just figuring out this problem. It’s called the Prometheus Project. So, that’s the next frontier in space propulsion.

CURWOOD: What form of space propulsion would you like to see in the future?

TYSON: I like the warp drive concept. I’d first seen it in “Star Trek.” I don’t know if it predates that, but you are what you are and there’s your destination really far away and you figure out how to manipulate the fabric of space and time so that the space between you and your destination is warped. And then you cut a hole through that warp and then you basically tunnel from where you are to where you’re going, bypassing the otherwise warped distance that is otherwise warped out of your view. And then you land where you are, you unwarp space, you cross the galaxy during the TV commercial which is what happened during “Star Trek.” And what would otherwise take you hundreds of thousands of years to make this trip, you can now do in just a matter of minutes. That’s to me the most intriguing frontier of science and, of course, as well as engineering that I can’t even imagine when that would be real, but it’s fun to dream about because in that case the sky’s the limit.

TYSON: It’s a pleasure to be here again.

CURWOOD: Coming up. Oh dear, where have all the wildflowers gone? Keep listening to Living on Earth.