Eric Brende was midway through his PhD at MIT when he decided to live on an Amish farm. Host Steve Curwood talks with Brende about the challenges of going off the grid and living off the land, and about his new book, "Better Off: Flipping the Switch on Technology."

CURWOOD: Eric Brende was about midway through getting a PhD from the Massachusetts Institute of Technology when he headed for the simple life. Mr. Brende and his wife, Mary, gave up a culture of innovation and technology, for a close-knit community of Amish folks in a location he's sworn to keep secret. The couple took up in an old farmhouse and tried living off the land. It was meant to be a one-year experiment to help him write a thesis about appropriate technology, but Eric Brende never returned to finish his degree. Instead, he chose to live the simple life—for better or worse. 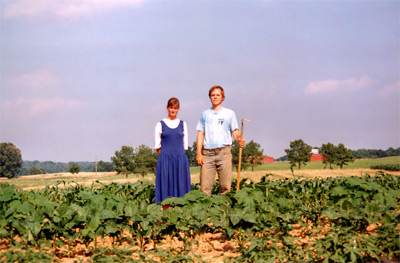 His new book is called, "Better Off Flipping the Switch on Technology: Two People, One Year, Zero Watts." Eric Brende, welcome to Living on Earth.

CURWOOD: Eric, by choice, you left the center of technological innovation, MIT, for a way of life that consciously shut out technology. Why such a 180 degree?

BRENDE: Well, I'd have to say that by the time I got to MIT, I was already fairly dead-set against the way technology was heading in our society. Even though, there was a point in my life when I was extremely enthusiastic about technology and everything like that.

CURWOOD: What turned you off?

BRENDE: I think it was just a series of incidents and events and a general trend. I don't know if it began the time that my father got one of the first word processors ever made when I was maybe about 13 years old. And, of course, the idea of this was to save the time and trouble of writing and make it go a lot faster and easier and all that. But, my dad spent so much time with that device, I almost never saw him again. And, I think, maybe that began the trend in my own mind to question technology and ask "is it really saving us time or is it actually gobbling up our time and maybe even gobbling us up along with it?"

CURWOOD: So, where do you go and without giving away too much because you're not allowed to say exactly where this Amish community is. Tell us about the area surrounding it.

BRENDE: Well, it's typical of where a lot of Amish communities like to settle. And, by the way, I don't think we can classify them strictly as Amish. I call them Mennonites in the book. They're in kind of a gray area between the old-order Amish and the old-order Mennonites. But, at any rate, these types of groups tend to settle in areas where large mechanized farmers don't do well, such as rolling hills, areas with a lot of alternating with woods and hills and fields. So, you don't find many Amish farmers in the center of Illinois, which is very flat. You don't find them in the center of Kansas, which is very flat because big machines can do that. So, they're better in the areas with the roll.

CURWOOD: Now, this isn't exactly the type of community that advertises itself though. How did you find out about it?

BRENDE: Well, I met one of them on a bus on my way from Topeka, Kansas where I grew up to MIT between semesters. And, at the next bus stop, I struck up a conversation with him. One thing led to another. I got his address and later on in the semester I wrote him a letter and he was able to set up something for me and it turned out to be large enough accommodations for my wife, as well.

The typical Amish group in the United States will allow all kinds of motorized equipment up to the point of motor vehicles. So, they will allow pumps, they'll allow chainsaws, they'll allow all kinds of stationary farming equipment, but they just won't allow the automobile or they won't allow the tractor. But this group did everything either by hand or horsepower. So, from the point of view of the typical Amish group in the United States, this group was as far back in the past as maybe most Amish people seem to us in modern society. So, this combination of openness to outsiders, but yet very primitive technological conditions made an ideal setting for my quote, unquote experiment.

CURWOOD: Now, what would you say was the hardest thing to give up?

BRENDE: The hardest thing to give up. We didn't have, of course, we didn't have electricity and so we didn't have a refrigerator and we didn't have any of those things that are motorized or electrified. But the main impact that it had on Mary and we had fallen, I would say, we had fallen into a fairly traditional pattern of household division of labor where Mary pretty much ended up doing most of the cooking and I pretty much did most of the heavy work, although there was a lot of overlap. But, she pretty much was doing the cooking and the problem with not having a refrigerator is you can't keep leftovers. So, it meant that she had to come up with a new meal every single one of the three periods of the day where you eat. And the food that we ate from the previous meal would get thrown to the pig or thrown on the compost heap. And she wasn't used to having to cook that often, so it was a labor creator.

That was one of the areas where we concluded, we went there trying to determine how much technology do we really need. We concluded that a small refrigerator or some equivalent way of keeping food cold was a definite benefit.

CURWOOD: How tight was this community? How close were people?

BRENDE: Well, I'd say, you know, on a scale of one to ten among such old-order communities, I'd say it was a ten, very tight, very close-knit. And I think, again, that it's a direct result of their strictness on technology. It meant that they had to rely on one another to help each other out. They didn't have, they couldn't just push a button and have all these chores automatically done for them. And that was the beauty of the community. You know, people wonder well, what do they do to have fun, is it just all work all day? Well, the work is part recreation. They look forward to getting together because it's a way to visit.

And, certainly, the example that stands out in my experience and is described in the book is the time that I first try out threshing which happens to coincide with a terrible heat wave. But I was unprepared for this physically and I actually practically passed out. And, I had to spend three days in bed with what appeared to be the symptoms of heatstroke. But when I acclimated, I found that this same principle held, with threshing as hard as it was, gradually became automatic. The actual physical act of hurling this huge sheath of wheat over your head and onto a wagon, you became unconscious of it and you get involved in conversations with the people. At times, it was even boisterous; the storytelling was quite something.

CURWOOD: And, my grandmother would say, many hands make light work.

BRENDE: Yes, and it works the other way, too. I don't know if you've ever gone to a party and you walked in and you felt this chill. And you had a hard time breaking in and starting a conversation with anybody. And then, you strain and you think of small talk, chitchat, and then you have to grab a cocktail so you can loosen up a little. Well, the curious thing about this work is that the work performs the same function as a cocktail does at a cocktail party. It gives you something to do with your hands, it loosens you up a little, it gets your endorphins flowing so you're a little more relaxed. So, the work actually takes off some of the onus of socializing.

CURWOOD: So, life after the Amish, what was your greatest adjustment?

BRENDE: Everything. It was a little hard. It was a little bumpy leaving at first. We were very torn and modern society was kind of a shock. We finally have settled back into a rhythm, now that we live in St. Louis, but it takes a while to develop. It takes a while to get a sense of how you can live with that kind of a quasi-Amish existence in a city, but it's possible. In fact, it's more than possible because we're doing it, I think, very well now in St. Louis. But, at first, it was a little bit wrenching

CURWOOD: Eric Brende is author of "Better Off Flipping the Switch on Technology." Thanks for taking this time with me, today.

BRENDE: Well, thank you for having me.


"Better Off – Flipping the Switch on Technology"