Hunters often get a bad rap from folks who consider themselves environmentally conscious. But, as producer Will Kilburn reports today’s modern hunting organizations are also some of the most progressive and aggressive land and wildlife conservationists. He profiles the group Ducks Unlimited.

CURWOOD: Because hunters need places to go hunting they have become some of the nation’s biggest land and wildlife conservationists. And when these hunters band into organizations their technical expertise and financial and political clout can have a considerable impact on the environment, even if others who identify themselves as environmental advocates prefer to get their meat from the butcher, or don’t eat meat at all. Producer Will Kilburn has this profile of one hunter group called Ducks Unlimited.

KESSLER: If you have an extra set of hands, you can hand me some of those decoys there… Set a couple more blacks up on this side, and leave a hole right in front of us. Put a couple of blacks down in that area.

KESSLER: Put the finishing touches on getting ready here.

CUSHMAN: So, where all the birds?

KILBURN: Craig Kessler and John Cushman are setting out wooden decoys in Great South Bay, Long Island, just a few dozen miles east of Manhattan. Both men are in camouflage. Kessler’s boat is covered with bunches of grass.

KESSLER: This is the grass that was cut from a different spot. See this taller stuff here? As you get into the upper part of the marsh, there’s this shorter stuff which is called patens, which is this stuff here. Being that I’m the king of camouflage, I want everything to look real natural.

KILBURN: The effect is convincing, at least to human eyes. The boat seems to melt into the scenery--in this case, a group of low, grassy islands, on the sheltered side of the barrier beaches which protect the Island’s southern shore from the Atlantic. Kessler lays out the plan for the day.

KESSLER: First of all, there’s lots of ways you can hunt ducks. But we’re hunting over decoys today, which is the classic way of doing it. You could walk around the marshes quietly, in the hopes of flushing some up – that’s called jump shooting. You can do that. You can try to get in a flight line where they’re going and do what’s called “pass shooting” which is, hopefully, to get some to fly by you in the right spot. But hunting over decoys is the classic way of hunting ducks. Because what you’re doing is sort of relating to the birds’ behavior in a very direct fashion.

KILBURN: Both Kessler and Cushman are experts in duck behavior, but only partly because of their interest in hunting them. Cushman volunteers as the New York state vice chairman for the conservation group Ducks Unlimited, while Kessler works full-time as a biologist for the group – making this, for Kessler at least, a day at the office.

KESSLER: So, if everything works absolutely perfectly, which it will not, the ducks would come around, they’d see our decoys, we’d call to ‘em, they’d set their wings, they’d sail down to try to join this flock of resting birds and they’d come right down in front of us. Which would give both John and I a good close shot, a killing shot, and that’s what you’re trying to do. You’re trying to respect the game so you’re not crippling it or shooting it at ranges where it’s beyond the capabilities of the gun and those kinds of activities which do give sportsmen a bad name.

KILBURN: Ducks Unlimited was born in at a time when sportsmen, by and large, didn’t have a bad name: 1937, after vast amounts of waterfowl habitat were lost during the drought years of the Dust Bowl. The group now has close 700,000 members and has conserved more than 10 million acres of land from the Arctic to the tropics. Along the way, things changed. Hunting became stigmatized by many, and Kessler says development, not drought, is now the big enemy of waterfowl habitat.

KESSLER: There are fewer ducks because there are fewer places for them to go, but even if the ducks were packed in here…the entire shoreline of Long Island was marshland. There were tens of thousands of birds that were living in areas that are just no longer available any more. It was not uncommon to go out and see 5 or 10,000 of those birds moving around they bay, diving down to the bottom, and as the bays have deteriorated in quality, the food resource has gone down. 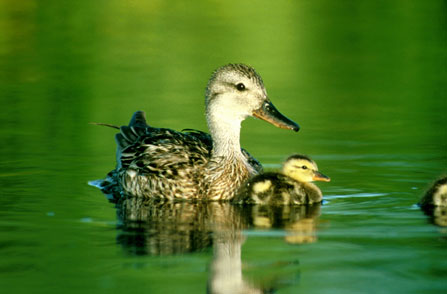 A Gadwall hen and one of her ducklings.(Photo: © USFWS)

KILBURN: Part of the problem, the houses which take up almost every inch of this very expensive shoreline. But even the few unbuilt areas are a long way from a truly natural state. The spot where Kessler and Cushman lay out their decoys, for example, is next to a wildlife refuge and several large islands which are scarred by mosquito ditches, damage which Ducks Unlimited and other groups are working to undo.

[WALKING THROUGH THE MARSH; RUSTLING]

KILBURN: One place that healing process is taking place is here on Plum Island, one of the jewels of the Massachusetts coastline north of Boston. Ducks Unlimited biologist Grace Bottitta explains that the marshes went through not one, but two rounds of ditching. First, by farmers in colonial times so that they could grow salt hay for their livestock, then again during the Depression.

BOTTITTA: In the 1930’s, throughout the Atlantic Coast, freshwater and saltwater systems were ditched because they thought that mosquitoes bred in all types of water that sat on the marsh surface. They thought the best way to get rid of the mosquito breeding area was to drain the marsh, and the folks through WPA got paid by the linear foot to ditch the marsh, and as many ditches as you could fit in, that’s what they did.

KILBURN: Bringing that saltwater back in, Bottitta says, will not only restore animal diversity, but also bring diversity back to plant life as well…something that Ducks Unlimited and other groups will monitor over the long term.

KESSLER: Before each restoration we collect data on the health of the marsh – vegetation, fish use, bird use, invertebrates, soil salinities, dissolved oxygen content of the water, temperatures of existing waters, if there are any there. And then, after the restoration, we do the same type of stuff to make sure we were doing what we thought we were doing to the marsh. Sometimes you can do it for a year or two afterwards, with the intention of doing it every 10 years, 20 years, kind of rechecking on things.

KILBURN: So, does this mean that once duck numbers rebound on Plum Island, that duck hunters will be back, as well? No. Hunting isn’t allowed anywhere on the island which is part wildlife refuge and part residential neighborhood. Plum Island is actually typical of the group’s work these days, despite a common misperception that they only preserve areas that can be used for hunting. Group officials say that an increasing number of its members don’t hunt. Just as tellingly, Ducks Unlimited now often works with partners who you might think would shy away from the group’s long association with hunting.

JONES: We don’t hunt on our properties, but that wasn’t the issue here. The issue was to create habitat for waterfowl, shorebirds, and also upland species, grassland birds that are dependent on the fields that we were planting, so hunting wasn’t really a concern.

KILBURN: Andrea Jones is a bird conservation biologist with the Massachusetts Audobon Society. The group is working with Ducks Unlimited on a coastal restoration project in the southeastern part of the state. She says there wasn’t really any controversy about the collaboration.

JONES: I think they’ve done great work and they’ve done more than, perhaps, any other conservation group to protect wetlands. We’ve chosen through the span of our organization, which is about 102 years old, not to allow hunting in our sanctuaries but it doesn’t mean we’re anti-hunting as an organization.

KILBURN: Ducks Unlimited biologist Craig Kessler agrees that hunting and conservation aren’t mutually exclusive, if you think about it.

KESSLER: The hunting issue as it relates to wetland habitat preservation is really a very important ingredient because waterfowl, as a group of birds, as a group of animals, has probably been studied, managed, for more than any other animal on the face of the earth. And there’s that hunting interest that has basically driven that. The hunters have been concerned about preserving waterfowl habitat since the 1930’s. People that are out here in kayaks birdwatching now - I’m not necessarily taking anything away from them - but for them to take a negative bent on hunting, and just consider that it’s a bunch of guys out wanting to spit and curse and kill everything that moves is really not an accurate picture at all about what hunting is all about and what it’s meant to the waterfowl resource.

KILBURN: At the end of the day, Kessler’s prediction of duck non-cooperation has come true. There’s not a bird in sight. The tide is too high, the sun too bright, and the air-- a brisk 40 degrees or so--too warm for the ducks to leave their sanctuary in search of food. But Kessler’s not disappointed.

KESSLER: That’s actually one of the more rewarding – believe it or not – rewarding aspects of duck hunting, as opposed to some of the other hunting, like pheasant hunting, for example. You could walk all day and never shoot a pheasant, or even kick one out, so you don’t even get to see the quarry that you’re after. And with waterfowling, unless you’re in a really bad spot, you’re usually gonna see waterfowl, and it’s that anticipation that, perhaps, they’re gonna come your way, maybe this one’ll come close enough. It gives you some degree of satisfaction even if you don’t actually get ‘em. At least you’re out there, enjoying what’s out here, not only the camaraderie of it but the other sights and sounds.

KILBURN: Ducks Unlimited biologist Craig Kessler, calling in vain to the ducks who chose not to take part in this story.