In the West, lack of rain for several years has dried up plants that herds of wild horses depend on for food. Groups of committed volunteers round up horses and feed them, but many starve. Arizona Public Radio's Laurel Druley reports some favor a different alternative.

CURWOOD: Wild horses still run together in some parts of the West. It falls to the Bureau of Land Management and some committed volunteers to make sure the herds don’t outgrow the forage and water available for all wildlife and cattle on the range. Sometimes, though, things don’t work and a number of horses have died as a result of the drought that’s plagued the region for four years. But no one likes the idea of letting nature cull the herds by starvation. Arizona Public Radio’s Laurel Druley reports on an alternative.

DRULEY: Surprisingly close to the neon lights of the Las Vegas strip is an authentic slice of the old west. Under the baking desert sun, beneath gigantic rock formations is the Red Rock Canyon. Once upon a time, thousands of wild horses roamed the canyon. Now, only about 30 remain. And they’re temporarily corralled in one corner of the canyon called Oliver Ranch.

DRULEY: Last summer when the Bureau of Land Management and wild horse supporters realized many horses were dying as a result of the drought, they rounded them up and brought them here. Since last year, Mary Thompson and other volunteers have come to feed the horses once a week at the ranch.

THOMPSON: If they hadn’t rounded them up they would’ve all been dead. They would’ve never made it. There was no water. They had nothing to drink. There was no grass. [HORSE SNORTING] They were barely standing.

DRULEY: The herd’s health had reached a critical stage. On a scale of one to ten – ten being obese and one being dead – the horses were characterized as a 1.5.

DRULEY: At a bar and grill near her home in Las Vegas Lori Howard remembers getting the call for help from the Bureau of Land Management. She’s vice president of the National Wild Horse Association.

HOWARD: The 30 horses that we were talking about I was aware of, was probably the last of the herd. This was all that there was left out there after hundreds of years. So I had to make a call and I said, “Bring them in.” And I called the board members and said, “This is the situation. We have 30 horses left in Red Rock. We have them at Oliver Ranch. And this is it gang. If they go, they’re gone forever. What do you want to do?” 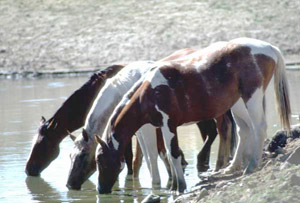 (Photo courtesy of BLM)
DRULEY: The now healthy herd can be released back into the wider canyon as soon as, well, it rains. Howard says it’s important to her to preserve this herd.

HOWARD: They’re a part of our heritage. They’re the ones that brought us to the west. Without those horses they would’ve never made it here. And even though they’ve been the beast of burden, they also offer us so much.

DRULEY: The horses used to be slaughtered by ranchers who resented the amount of water and vegetation consumed by wild horses. Scarce water and resources have long been problems on the rangeland. Now, when herds are too big officials put wild horses up for adoption. Maxine Shane is spokeswoman for the federal Wild Horse and Burro program in Nevada. Shane says gathering the horses and finding adoptive homes can be very costly.

SHANE: It costs as much as $300 to set up the trap sites, send out the helicopter, bring the horses into the corrals for preparation. Preparation is fairly expensive. You have inoculations. You have drawing of blood. You have hay, holding costs, and whatever.

DRULEY: Depending on how long the animal is held and where it has to be transported for adoption the government spends up to 15 hundred dollars for one horse. And some adoptive owners have mistreated their horses. So wild horse supporters are lobbying for another way to keep the horse population down: contraception.

The Humane Society and the Food and Drug Administration are working with the Bureau of Land Management to license a time-release contraceptive called Porcine Zona Palucita or PZP. 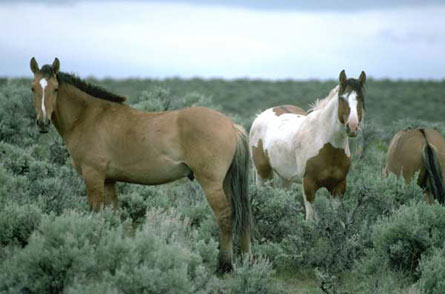 SHANE: PZP is actually the ovaries of pigs. And it fools the sperm into thinking that the mare is pregnant. And then the mare can’t be impregnated. So, if she’s carrying a foal, it doesn’t hurt the foal that she’s carrying. But she simply doesn’t get pregnant the next year.

SHANE: It’s not long term. So we don’t want to stop these mares from ever being able to have foals. We just would like to slow it down a bit so we don’t have to gather so often. And that’s a lot less stress for them and a lot less money. And of course it means that we can be gathering less horses and can be more particular about who adopts.

DRULEY: While more PZP tests are done, government officials are planning to gather 6, 000 horses this summer across the west.

DRULEY: The National Wild Horse Association’s Lori Howard will continue to monitor the herd at Oliver Ranch. She says these animals are unique. They’re the only horses with the physical make-up to survive the rugged terrain of Red Rock Canyon. In other words, if the herd became extinct, wild horses might never again roam through this slice of the west.

ANNOUNCER: Funding for Living on Earth comes from the World Media Foundation. Major contributors include the Ford Foundation, for reporting on U.S. environment and development issues; and the William and Flora Hewlett Foundation, for coverage of western issues. Support also comes from NPR member stations and Bob Williams and Meg Caldwell, honoring NPR's coverage of environmental and natural resource issues, and in support of the NPR President's Council, and Paul and Marcia Ginsburg in support of excellence in public radio.