Light Up the World

Dave Irvine-Halliday recently won an international award for using light-emitting diodes to bring light to homes throughout the developing world. He speaks with host Steve Curwood about his efforts.

CURWOOD: Worldwide, there are an estimated two billion people who don’t have access to lights. Their use of conventional lamps would require the construction of hundreds of new power plants. But one scientist in Calgary believes light emitting diodes can provide a far more efficient alternative. Dave Irvine-Halliday won the Rolex Award for Enterprise for bringing LED light to the developing world. He says the inspiration for the project came while he was hiking through Nepal.

IRVINE-HALLIDAY: There was a wee schoolhouse and I heard these children singing in the schoolhouse. So when I got down there, I popped my head in the window, which, of course, had no glass. And not only were there no children actually inside the school, but there were no tables, chairs, or teacher. And when I popped my head back out of the window, I noticed there was a lovely hand-painted sign above this window and it said ‘To you travelers, our children don't have any regular teachers, and if you'd like to kind of stay around for a couple of days and help our children, we would really appreciate it.’

I think at that moment, everything sort of came together. Because when I poked my head in the window, my first thought was how dark it was. I don't know. I honestly do not know why the thought suddenly struck me - is there anything that I could do as a photonics engineer to bring light to these folk, at least help the children with their education?

CURWOOD: Now why did you choose light-emitting diodes?

IRVINE-HALLIDAY: It just kind of struck me that if we were to produce light that was affordable and reliable and rugged, and also using very, very low power, we couldn't go along the standard routes, in other words incandescent bulbs, or even the much more efficient compact fluorescent lights. And because I deal with diodes basically every day of my life, though it's in kind of fiber optics, for some reason the thought just occurred to me, well, why don't we try LEDs?

CURWOOD: Now, why not use compact fluorescents in these villages? Don't they compare more favorably in efficiency to a white light light emitting diode?

IRVINE-HALLIDAY: I gave compact fluorescents a really deep look, but came to the conclusion that there was still approximately a ten to one difference in the amount of power or energy that I would need in order to light up a home to a useful level. This "useful,” the term "useful," I had to kind of define that myself. And when you find out how a light emitting diode actually emits its light, it emits it as a cone. You can actually direct it very efficiently to where you actually need the light to be, as opposed to lighting up the walls and the ceiling and the corners of the home. In a nutshell, the bottom line is you can light up a home to a very useful degree in the developing world, with a single watt of power. It's a bit more difficult to do that with a compact fluorescent. It just came down to the energy requirements, plus the reliability, and the fact that LEDs live for literally decades.

CURWOOD: What are the power sources that you've been using for these lights? If it only takes a watt, how do you get that one watt?

IRVINE-HALLIDAY: We've done it in three ways. The first method was what we called the pedal generator. That pedal generator, which kind of pumped out effectively around 40 watts or whatever, it would charge up five of these small 12-volt batteries simultaneously.

The second method we used was very small hydropower. The third way, which is probably the way that we're going to use mostly in the future, is good old solar power, solar photovoltaic cells. 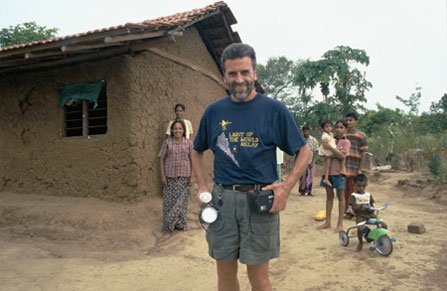 CURWOOD: What stories have you heard? What have people told you about how all of this has affected their lives?

IRVINE-HALLIDAY: I think the first quote that really made a difference to me was in Sri Lanka, and we just lit our first village there. It was actually about one o'clock in the morning; we happened to have been out visiting people. We were coming back through the jungle and we saw this light, and we recognized it immediately as one of ours. So we went over, and the father was still up. He opened the door and showed us the children who were all kind of lying on a mat on the floor. And he said ‘This is the first night in the entire life of all my five children that they've been able to read at night.’ It's that kind of thing that, as I say, it kind of reduces you to tears almost, but if you ever needed a reason, which we don't, that certainly gives you it.

CURWOOD: David Irvine-Halliday is director of the Light Up the World Foundation. He recently received the Rolex Award for Enterprise for his work to bring light to developing countries. Thanks for speaking with me today.

IRVINE-HALLIDAY: Thank you very much.

FEMALE ANNOUNCER: Funding for Living on Earth comes from the World Media Foundation. Major contributors include the Ford Foundation, for reporting on U.S. environment and development issues; and the William and Flora Hewlett Foundation, for coverage of western issues. Support also comes from NPR member stations and Bob Williams and Meg Caldwell, honoring NPR’s coverage of environmental and natural resource issues, and in support of the NPR President’s Council; and Paul and Marcia Ginsberg, in support of excellence in public radio.


Light up the World Foundation