Farmers in the famously fertile San Joaquin Valley of California are taking their land out of production because the soil is becoming too salty. Tamara Keith from KQED reports the farmers say the government should pay them for their loss.

CURWOOD: When the federal government built dams and pipes to carry water from Northern California to the baking hot San Joaquin Valley, it was a high risk that intensive irrigation could eventually make the soil salty. Forty years later, some land is so contaminated with salt that it kills crops. The water and the agricultural riches it produced built a powerful farmer's lobby, the Westlands Water District. Farmers there say that if they stop farming the salty land, they should be compensated, and taxpayers could end up paying hundreds of millions of dollars. From member station KQED, Tamara Keith has more.

KEITH: On a recent morning about 50 farm workers methodically moved through a field of romaine, plucking each head from the ground, removing the outside leaves and putting the hearts into boxes. This time of year almost all of the lettuce in the country is grown in the Westlands Water District. But the bounty comes at a cost. Over time the land is slowly being poisoned by natural salts in the water used to irrigate it. Now farmers like Paul Betancourt, are watching their land become less productive.

BETANCOURT: We grew four bails of cotton an acre in this field right here, and on the north 80-acre blocks we grew two bails of cotton this last year. That's how significant a difference it is. 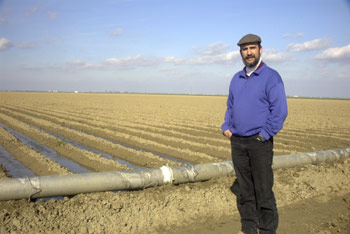 KEITH: In some spots you can actually see white salt crystals form a crust on the soil.

KEITH: Irrigation water gushes out of a pipe into Betancourt's field. It will keep flowing like this for 48 hours, until he shuts the pipes off. Betancourt is hoping this land will see him through retirement, but he's worried.

BETANCOURT: This soil will eventually become worthless. And the farmers end up paying the price for that, because we've invested our lives in these farms with the hope of having drainage service so we could farm them in perpetuity. Which is a good idea, and that won't happen now.

KEITH: About two years ago Westlands Water District officials began pushing for a solution that few would have predicted: retire up to 200,000 acres of salt-contaminated cropland, cutting the farming here by a third. Although too salty for crops, farmers say the land can be restored, and could one day provide habitat for endangered species. Growers want that federal government to pay a fair market price for the land, and the bill could come to half a billion dollars or more. Thad Betner is the deputy general manager of resources for the Westlands Water District.

BETNER: They have the highest crop yields out of anywhere else in the valley. They can grow a variety of different crops that can't be grown anywhere else. And to take this land out of production, it's unfortunate, but that's the reality we have to live with.

KEITH: When the federal government first built the dams and piped in the water, officials knew they'd need to carry away the salty wastewater. The original plan was to send the water into the San Francisco Bay Delta, but because of fears that the Delta would be harmed by the water, the drain was never finished. Instead, the brackish water was dumped into the Kesterson Wildlife Refuge in Merced County. Then, 20 years ago, Kesterson became synonymous with environmental disaster. 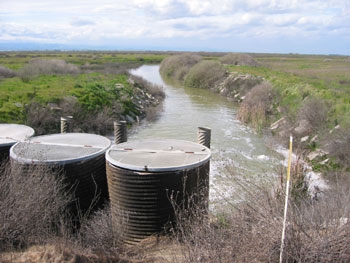 The end of the San Luis drain, which once carried Westlands
irrigation water to the Kesterson Wildlife Refuge.
(Photo: Lloyd Carter)

KEITH: At the time, environmentalist Lloyd Carter was a reporter for United Press International. He was one of the first to cover the story of selenium poisoning at Kesterson from the Westlands drain water.

CARTER: And when I got out of my car, the first thing that overwhelmed me was this sulfurous smell. And then I looked around out onto this pond here to the northwest and I saw hundreds, if not thousands, of dead birds floating amongst the living birds.

KEITH: Now an environmentalist with the group California Save our Streams, Carter says it was like a scene straight out of the Alfred Hitchcock movie The Birds.

CARTER: The marsh is actually a quite noisy place. It's full of life and birds. And Kesterson was strangely silent. It was quiet, because everything was dying.

KEITH: The pools of toxic water were eventually dried out and covered over with dirt to protect the birds. Westlands' drain water was shut off. Today the federal government is still working to provide drainage to the western San Joaquin Valley under a court order, and one possibility would be new evaporation ponds. Environmentalists are skeptical. But officials say they've learned from Kesterson, and any new ponds wouldn't harm wildlife. Jason Phillips with the U.S. Bureau of Reclamation is studying the options. 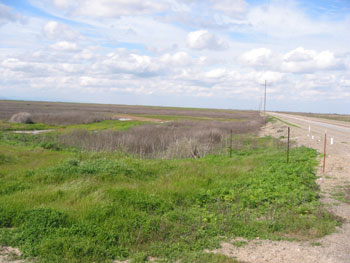 The Kesterson Wildlife Refuge today
with the ponds filled in with dirt.
(Photo: Lloyd Carter)

PHILLIPS: Really, there's only three places you can take it. You can take it directly to the Pacific Ocean, you can take it to the Bay Delta, which is the original envisioned disposal location, or keep it within the valley and evaporate it.

KEITH: But each of these options could cost as much as a billion dollars and may create other environmental problems. Meanwhile, a handful of farmers are already getting money to idle their fields. They had sued the government, saying the lack of drainage destroyed their land. Under a settlement reached earlier this year, the farmers will get 100 million dollars in damages and 40 million to retire their land. Like the officials at Westlands, environmentalist Lloyd Carter is pushing for a massive land retirement, though he isn't at all happy about the idea of the government paying for it.

CARTER: This is all to benefit 600 growers. History will show that this was one of the great, stupid mistakes of the federal government in pouring literally billions of dollars into a project on lands which should have never been farmed.

KEITH: If the federal government agrees to buy out all the salt-contaminated land, it would be a first. Already farmers in other parts of the state dealing with water supply problems are beginning to call for land retirement programs of their own. Any deal with Westlands would be precedent-setting, so many eyes are watching. Environmentalists look at land retirement as a chance to return water to the rivers it was diverted from decades ago. But Westlands officials want to keep the water for their remaining acreage. For Living on Earth, I'm Tamara Keith in Fresno County.

ANNOUNCER: Funding for Living on Earth comes from the World Media Foundation. Major contributors include the Ford Foundation, for reporting on U.S. environment and development issues, and the William and Flora Hewlett Foundation, for coverage of western issues. Support also comes from NPR member stations and the Noyce Foundation, dedicated to improving math and science instruction from kindergarten through grade 12, and Bob Williams and Meg Caldwell, honoring NPR's coverage of environmental and natural resource issues, and in support of the NPR President's Council.