The Tigris and Euphrates rivers have defined Middle Eastern civilizations ever since ancient Mesopotamian times. Today, the rivers are divided by the politics and thirst of Turkey, Syria and Iraq. The present crisis in Iraq is threatening the water system there, and could create widespread health problems. Host Steve Curwood speaks with King’s College professor Tony Allan and Oxfam International’s Paul Sherlock about the past, present and future of the Iraqi water supply.

CURWOOD: It’s Living on Earth. I’m Steve Curwood. The lands of Mesopotamia were once rich with resources, thanks largely to the two great rivers that defined its borders. The Tigris to the north and the Euphrates to the south provided water, food and a bridge between societies.

Modern day Iraq is at a particular disadvantage, being downstream from Turkey and Syria, and the last to receive the rivers' waters. Iraq's water supply today is deemed inadequate to fulfill its needs, largely because much of it is polluted due to neglect. That's a problem to be addressed in any rebuilding of the country. Paul Sherlock is lead coordinator of the Water and Sanitation Unit for the United Nations Relief Operation. And he joins me from Amman, Jordan. Also with us is Tony Allan, a professor at King's College and director of the Water Issues Research Group in London.

Professor Allan, let's start with you first. Can you trace the path of the Tigris and Euphrates for us? What's the landscape they pass through before they empty into the Persian Gulf?

ALLAN: Well, the Euphrates rises in Turkey, as does the Tigris. But the Tigris receives significant water from Iran. This area of the Middle East, by the standards of the Middle East, is quite well watered. The total volume of water in that system is about the same as in the Nile, but it's in two rivers in this case.

The problem with the water, or with the landscape, is that in the south, in Mesopotamia where there have been thousands of years of civilization, the land is not very good. It's very saline. And combining water with it does not work the miracles that it does in other parts of the Middle East, such as Egypt.

So, we have a history of many civilizations. And some archaeologists argue that these city-states of the past ran out of resources because they could not manage the land effectively, because it eventually became too saline.

CURWOOD: So, tell me, today, water is really central for Turkey, Syria, and Iraq in this watershed. At what point did political tension start to form over these rivers throughout history?

ALLAN: There was no shortage of water until the late part of the century, let's say until about 1970, mainly because Turkey had not thought to develop its water in the upper part of the basin until the '60s. Plans were made then. Then they built the big dam in the 1970s, another in the '80s, and another in the '90s.

The point at which they built those dams, of course, on the Euphrates, they interfered with the flow of that river. And they will eventually, and have done already, through the filling of the dams, halved, roughly, the flow of the Euphrates as it leaves Turkey. And that means that there's been a dramatic reduction in flow into Syria, which has then to share the water further down with Iraq.

CURWOOD: Paul Sherlock, I want to turn to you now. You're based in Amman, Jordan, and waiting to go into Iraq with humanitarian aid. You were recently able to assess the water quality and systems in the country. Can you describe the water system, the fresh water system for people as it exists today, as well as the irrigation? What kind of shape is it in?

SHERLOCK: I think to look at it today, you've got to look at what it was like 12 years ago. Twelve years ago, this country is not short of water. And because it was an oil-based economy, it developed, 15 or 20 years ago, a fairly sophisticated system. And the statistics 12 years ago was that about over 95 percent of the urban population, and 75 percent of the rural population, had piped treated water into their homes.

Today, because of the war ten years ago, and because of the sanctions, that percentage in the urban side has dropped to about 92 percent, 91 percent, and in the rural areas down to about 40 percent. The quality of that water, despite the fact that in most cases it's gone through a treatment plant, the quality is fairly low. 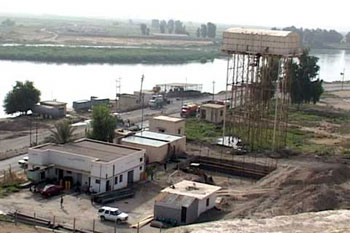 A water treatment plant, near the northern city of Mosul,
serves rural areas along the Tigris river.
(Photo: ICRC)

So, this is a country which has 218 conventional-type water plants. And it has over 1,200 what they call compact units. Which means that the compact unit, which is a small mini water treatment plant, is actually in most villages. Of course, after 12 years of sanctions, after the Gulf War, there was considerable damage to their power supply. Now this whole system in Iraq totally depends on electrical power. This is not a hand pump or spring type protection water base. This is a sophisticated system based upon electrical power. After the last Gulf War, they were never able to put back the power requirements in place. And for the last 12 years, they've been running about a third deficit on power.

CURWOOD: With things deteriorated in Iraq, we hear that there is now more raw sewage, other forms of pollution in the water, and that, with some of the troops massing along the Tigris River and firing artillery rounds, the military activity can't be helping water quality. What do you hear about how the present war is affecting water quality and infrastructure?

SHERLOCK: Well, I mean, the biggest concern of the things which are actually happening right now, in Basra and in Baghdad, Nasiriyah and other large cities--of course, this supply runs off of power. If the power goes down, then these systems will stop. People will then be forced to go to the rivers to take water for their drinking. And that's when we feel that, health-wise, there's going to be a major, major problem.

CURWOOD: How has water quality affected human health during the sanctions and now during this war?

SHERLOCK: It's very, very difficult to put a figure on it. What we do know is that, from the experience of the world, that water is the key to life. It's also the key to death because water is the transmission mechanism that carries a large proportion of infectious disease.

Therefore, at the moment we do know that the water quality is extremely bad. And if, after this crisis, we don't arrest that situation and get the water back together very quickly, there is a real risk of some very, very serious outbreaks of infectious disease.

CURWOOD: Where are people getting drinking water now?

CURWOOD: Tony Allan, let me turn again to you. To what extent has the need for water played into the shifting alliances among Turkey, Syria, and Iraq?

ALLAN: Well, not easy to predict. But, Turkey has a deep interest in the water. It wants to use more of it. It has made some sort of arrangement with the downstream states, which are contended by those downstream to provide secure water on the Euphrates, much less than it used to be, but secure water.

So, Turkey is in the strong position. It's the upstream state. At this point in history, it is the hegemon in terms of the strongest military forces, as well as the strong geographic position.

So, it is very interesting, just going back to the last Gulf crisis, Turkey was encouraged by international bodies, not international agencies, but certainly by those interested in intimidating Iraq, that they should interfere with the flow of the Euphrates. Which they could have done to some extent, but they were very adamant that they wouldn't.

So, this indicates that Turkey, which has been very bullish in terms of developing the water and reducing the flow, recognizes that there is a long future ahead in which Turkey is going to be relating to whatever political entity to the south. And, Syria and Iraq are certainly going to be amongst them. It's more important to play fair by them than even comply with what the United States would like to happen.

CURWOOD: Tony Allan is a professor at King's College and director of the Water Issues Research Group in London. Thank you, sir.

CURWOOD: And Paul Sherlock is lead coordinator of Water and Sanitation for the United Nations Relief Operation, and also works for Oxfam International. Thank you, sir.