This year marks the 200th anniversary of the Lewis & Clark expedition. Thousands of Americans are expected to visit historic points along the trail of discovery. Producer Barrett Golding cycled the entire trail and brings us this audio postcard of a family fishing near the Hanford Nuclear Reservation.

MALE: Fire in the hole.

CURWOOD: The year 2003 marks the start of the Lewis and Clark bicentennial.

CURWOOD: So, what’s become of the woods, waterways, prairies and towns the famous explorers traversed on their quest for the fabled Northwest passage?

CURWOOD: To find out, we asked producer Barett Golding to bicycle the trail and bring back portraits of people along the way.

BUTLER: Now that’s the way we rigged that.

CURWOOD: One fellow he met is Lewis Butler, a retiree from Hanford in Eastern Washington, which once produced weapons-grade plutonium. But now the mission of the plant is to clean up its own radioactive waste. 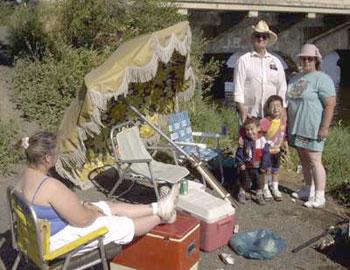 BUTLER: I’m Lewis Butler from Yakima. That’s my daughter Peggy. She’s from Yakima. And this is my little grandson Caleb. And we’re trying to catch a few catfish. Caught two. They’re right there on a string if you want to see them.

BUTLER: I’m retired. I retired from Hanford. Yeah. Everything worked around radiation and every-- I done that, whatever they wanted me to do. It was just a pretty nice bunch of people to work with. It wasn’t a bad job. A lot of time we had to get down and lay down a ditch and dig ditches around the pipes that had radiation in it, but they put lead on it to try to bring it down to normal as they could. They were pretty-- they pretty safety up there. They’re a good bunch of people.

That stuff’s potent. When they’d open them big lids, wind would blow and get some of it out. Then we’d go around and gather up the tumbling weed with a pitchfork and gloves on and everything, then we’d haul them up and burn them, and the ashes was just as strong after you burn them as it was before.

They dressed as good as they could. We’d dress each other. We’d wear two pair of gloves and two suits of clothes and sometimes we’d have to wear a mask if we was in a zone that was pretty hot.

I don’t talk about too much what they make, you know. Kind of a secret. And that’s about all I know.

BUTLER: Yeah, we’re trying to enjoy ourselves. She works all the time and I help take care of the house on the outside and help the rest of my kids.

BUTLER: Yeah, when we leave you won’t see no paper or nothing laying around here like you do in a lot of places. Most of the people is trying to clean up and everything. But there’s a lot of them that goes fishing and leaves more junk than they take. But we don’t. And we’re trying to teach the little ones to be the same way, where they’ll have something when they get big.

CURWOOD: Barrett Golding’s portraits of the Lewis and Clark Trail are part of “Hearing Voices” funded by the Corporation for Public Broadcasting.

For more audio, images and interviews from the Trail, go to loe.org.