A Gap in Nature

In the first of an occasional series, we hear about an animal that is no more. We begin with the mamo, a Hawaiian bird known for its beautiful feathers.

CURWOOD: Extinction is forever they say, but according to the World Conservation Union's 2002 list of threatened species, two creatures have made the rare journey back from the apparently dead. These so-called “Lazarus species” are the Bavarian pine vole from Germany and the Lord Howe Island stick insect from Australia. Tiny populations of each of these critters evaded detection for decades before their recent rediscovery. But usually, once an animal is listed extinct, it stays that way.

In the first of an occasional series we call "A Gap in Nature," author Tim Flannery profiles species we'll never see again.

FLANNERY: The velvet black and gold mamo was a robin-sized bird of the rain forests of Hawaii. Its long, down-curved beak was used to probe flowers, from which it got the nectar and pollen that were its food. The mamo's call, said to be a single long and mournful note, once echoed right through the forests of the island. 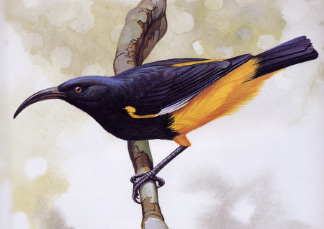 At the time of Captain Cook's European discovery of the Hawaiian Islands, it was so common that the feathers of 80,000 birds went into a single cloak made for King Kamehameha the First. But the Hawaiians enforced strict conservation practices when it came to the mamo. They would cleverly snare the creatures, pluck the prized yellow feathers and release the birds unharmed. Not so with Europeans whose hunting of the mamo for feathers and for museum specimens contributed considerably to the bird's extinction.

The last known mamo was shot in 1898 by Mr. H. W. Henshaw who worked for the avid British collector Lord Walter Rothschild. Henshaw recalled coming upon a family of the birds in the woods above Kaumana. After stalking them, he shot at one while it perched atop a tall tree. He later wrote "It was desperately wounded, and clung for a time to the branch, head downwards, when I saw the rich yellow rump most plainly. Finally it fell six or eight feet, recovered itself, flew around the other side of the tree where it was joined by a second bird--perhaps a parent, or its mate--and in a moment, was lost to view."

CURWOOD: Tim Flannery is author of “A Gap in Nature: Discovery the World's Extinct Animals.” To see a picture of the velvet black and gold mamo, go to our web site, loe.org. That's loe.org.


Click here to order "A Gap in Nature" by Tim Flannery">