From the World Summit in Johannesburg

Host Steve Curwood reports from Johannesburg, South Africa on the outcome of the United Nation’s Summit on Sustainable Development. The summit ended on a mixed note. Many delegates called it an important first step in implementing lofty goals to curb global poverty and environmental degradation. But, most environmental activists labeled the meeting a failure, saying it was co-opted by corporate and U.S. interests.

CURWOOD: Welcome to Living on Earth. I’m Steve Curwood at the World Summit on Sustainable Development in Johannesburg, South Africa.

MBEKI: We welcome the peoples of the world to a place that is recognized as the cradle of humanity. The Johannesburg World Summit for Sustainable Development is, therefore, for all of us, a homecoming. A return to the place from where all humanity evolved to cover the globe.

CURWOOD: At a celebration on the eve of the summit, President Mbeki reminds the tens of thousands of people who have come to Johannesburg what’s at stake.
We’re here in the richest city in Africa where the shantytown legacies of apartheid reflect the growing gap between the poor and the prosperous around the world. And where urban sprawl and dirty air are daily reminders of an environment in crisis.

MBEKI: We stand now ten years on from the Rio Earth Summit at the beginning of a new millennium. We see a world that is ailing from poverty, inequality and environmental degradation, despite the agreements at the Rio Earth Summit. This is a world in which a rich minority enjoys unprecedented levels of consumption, comfort and prosperity, while the poor majority enjoys daily hardship, suffering and dehumanization. We see a world that has pity neither for beautiful nature, nor for living human beings. This social behavior has produced and entrenches a global system of apartheid. The suffering of the billions, who are victims of the system, calls for the same response that drew the peoples of the world into the struggle for the defeat of apartheid in this country. Our common and decisive victory against domestic apartheid confirms that you, the peoples of the world, have both the responsibly and the possibility to achieve a decisive victory against global apartheid.

CURWOOD: Everyone at the summit seems to agree with the fundamental goals of helping the poor while protecting the environment. But as the delegates get down to business, the role of business itself is taking center stage with a long string of announcements of partnerships among the UN, national governments and corporations. They cover everything from hydroelectric power to clean water and sanitation projects in the developing world.

Sir Mark Moody-Stuart, the former chairman of Shell Oil, helped pull these initiatives together for the summit under the banner of Business Action for Sustainable Development.

CURWOOD: Let me ask you this, are there things that private business can accomplish in terms of environmental protection and social development that governments can’t?

MOODY-STUART: You can’t alleviate poverty by governmental charity or corporate charity alone. There just isn’t enough of it to go around. So we need investment and we need to be sure that the building of that economic activity is done in a way which does not damage the environment, and where the proceeds of it are perceived to be distributed in a fair way.

CURWOOD: Though Sir Mark Moody-Stuart believes in the power of enlightened self interest, thousands of environmental and social activists who have come to Johannesburg, don’t buy it, and don’t think the UN should, either.

CURWOOD: The summit is supposed to be about the environment. Is it?

MAN: I don’t think so. It’s about, rather to forgetting about the environment. Because what we are promised in the back ten years in Rio, you know, forgot here. Completely. It’s about the sustainable capitalism not about sustainable development.

[HELICOPTER WITH PROTESTERS IN BACKGROUND]

CURWOOD: Thousands of police officers, many in riot gear, are lining the rutted streets of the poor black township of Alexandra. Their mission: crowd control of some twenty thousand demonstrators who are here in a protest march on the summit. This is the largest march in South Africa since the protests against apartheid.

CURWOOD: How do you feel about the summit?

WOMAN: It’s a failure. They don’t take in consideration the real rights of the people.

CURWOOD: Hunter Lovins, tell me, why are you here today?

LOVINS: I’m here to petition my own government, my own government is not here in a, anything like a honest representation. When the heads of state are gathering to talk about the fate of the Earth, my president ought to be here and he’s not. And I am ashamed of that.

CURWOOD: How do you think this demonstration affects the official summit?

MAN 2: Well, I hope they get the message. I don’t know that they will, but there’s enough people here that they should really see what’s going on. But I’m not sure that they will be paying any attention.

CURWOOD: The World Summit on Sustainable Development is the largest gathering of world leaders ever in Africa. 190 nations are represented with more than 80 heads of government in attendance. Only two of the world’s top leaders aren’t here: America’s George W. Bush and Russia’s Vladimir Putin. 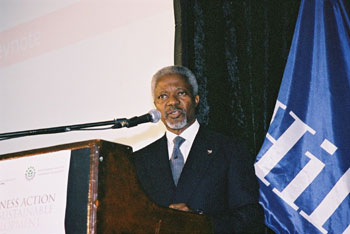 ANNAN: We look to the environment for the food and fuel and the medicines and materials that our societies depend on. We look at it as a rim of beauty and of spiritual sustenance. But let us not be deceived when looking at a clear blue sky into thinking that all is well. All is not well. All is not well.

SPEAKER AT PODIUM: I am pleased to announce today…

CURWOOD: Leader after leader from the world’s most affluent nations speak of partnership as they sketch out their plans and promises to meet the global challenge. France calls for a tax on multinational corporations. Japan offers training to help emerging economies avoid its own mistakes with pollution. Britain’s Prime Minister Tony Blair brings his checkbook.

BLAIR: I can tell you that Britain will raise by 2006 its commitment to development aid to Africa to 1 billion pounds a year and it’s overall levels of assistance to all countries by 50%. This is not charity. It is an investment in our collective future. If Africa is a scar on the conscience of our world, the world has a duty to heal it. We know the problems. We know the solutions. Let us, together, find the political will to deliver them. Thank you.

CURWOOD: Many leaders from the developing world remain doubtful that the good intentions and calls for partnership will translate into appropriate action. Bharrat Jagdeo is president of Guyana and chair of the Caribbean group.

JAGDEO: For partnership to work, it must be founded on trust. From my conversations with many of my colleagues, heads of government, it is clear that they feel that that trust does not exist. It is equally clear that this is due to the increasing prevalence of double standards in the conduct of international politics and economic affairs. It cannot be that partnership and interdependence are concepts to be invoked by some countries only when they feel themselves victimized and in need of international support. The type of partnership we seek between states must be based on the interest of all parties, mutual trust and respect.

CURWOOD: As the leaders are speaking, their ministers are putting the final touches on the Johannesburg Plan of Action. Much of the tension is over the balance between the demands world trade and the need to address environmental and human poverty. The agreement creates voluntary commitments regarding water, sanitation, agriculture, bio-diversity and health. The clauses on renewable energy are watered down at the insistence of the United States.

And perhaps the most important treaty spawned from the Rio process—the Kyoto climate change treaty –moves to center stage as Canada, China and Russia declare they will ratify the agreement. This will soon make Kyoto the law of the planet, except in the United States and Australia, unless they change their minds about the pact. It all makes for a chilly reception when it is time for U.S. Secretary of State Colin Powell to speak: 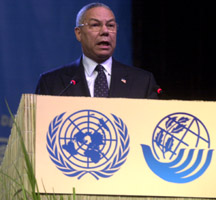 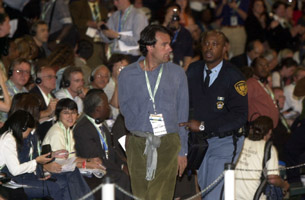 POWELL: We are committed…. We are committed not just to rhetoric and to various goals. We are committed to a billion-dollar program to develop and deploy advance technologies to mitigate greenhouse gas emissions. We have unveiled at this conference, four new signature partnerships in water, energy, agriculture and forests. These programs will expand access…

[AS CHANTING INCREASES, MODERATOR GAVELS AND TALKS OVER POWELL: "This behavior is totally unacceptable."]

POWELL: …provide jobs and improve food supplies for millions of people in need.

[CHEERING AND APPLAUSE FROM HALL]

CURWOOD: As summit security forces remove some of the demonstrators from the plenary hall, several environmental and social advocacy leaders, including Vandana Shiva of India, are staging a walk-out.

SHIVA: We’re leaving because the summit has betrayed the mandate of the summit, which was a follow-up of Rio. It has become a follow-up of WTO. This is not what these governments were sent here for. This is not what the public that sent them here is expecting. This was supposed to have been a sustainability summit. It has become a non-sustainability summit. Instead of representing the rights of the poorest to their vital resources – their land, their water, their biodiversity – the summit has ended up being an auction house for selling the resources of the earth to the highest bidder, which happens to giant multinational corporations.

CURWOOD: Many business leaders say they’re pleased with the outcome of the summit and the larger role at the UN for commerce, but most environmental activists say they gained little in Johannesburg. As the session ends, The UN Secretary General speaks to reporters.

ANNAN: I know there are those who are disappointed, and we didn’t get everything we expected to get here in Johannesburg. But I think we have achieved success, and I am satisfied with the results.

CURWOOD: We’re dedicating our entire program this week to issues raised at the Johannesburg Summit. We’ll be looking at efforts to bring fresh water to the poor of southern Africa. We’ll take a fresh look at nuclear power and its impact on climate change.

And up next we get an inside view on the environment from the White House. Stay with us. There’s more to come on Living on Earth.
[MUSIC: Arabesque, "Der Bauch", Gut Records]