Author Jack Loeffler chronicles his friendship with the late writer Edward Abbey in the book "Adventures with Ed: A Portrait of Abbey." Paul Ingles reports.

CURWOOD: This year marks the 75th anniversary of the birth of the late Edward Abbey. Abbey was author of several classics of southwest literature and an inspiration for many people. A new profile of Edward Abbey has just been published. It’s written by a man who came to know Abbey from the hours the two spent around campfires, on hiking trails and driving all over the southwest in their beat-up pick-up trucks. Paul Ingles has our story.

LOEFFLER: This is my truck, the 1977 Chevy truck that Ed and I trailed around in a lot.

INGLES: 62-year-old Jack Loeffler resembles a summertime southwestern Santa Claus in shorts, t-shirt and neck bandanna. He stands outside his home on the outskirts of Santa Fe, resting his hand proudly on the road-weary chocolate brown pick-up that’s an active character in his new book, "Adventures with Ed: A Portrait of Abbey."

LOEFFLER: And actually, Ed’s last night above ground was spent right there in the bed of that truck.

INGLES: On March 14th, 1989, Ed Abbey died surrounded by family and friends in his Tucson cabin. Loeffler zipped Abbey’s body up in a sleeping bag, set it in a box of dry ice in the truck bed, and with the help of other Abbey friends, headed to a secret, remote site in the Sonoran Desert to bury him. As Loeffler quotes in his book, Abbey himself had spelled out the funeral instructions in a 1981 journal entry when his health began to fail.

LOEFFLER: "No undertakers wanted. No embalming, for God’s sake. No coffin. Just a plain pine box hammered together by a friend or an old sleeping bag or tarp will do. I want my body to help fertilize the growth of a cactus or a cliff rose or sagebrush." 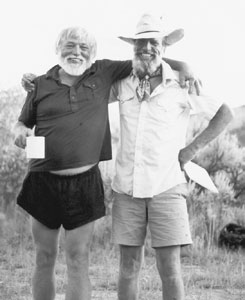 INGLES: An appropriate last wish for a man whose writing often championed the cause of the environment. Abbey’s burial is the last of the "Adventures with Ed" that Loeffler chronicles in the book. Both Loeffler and Abbey moved west from different points in the rural east. They often took seasonal work as fire lookouts that put them close to the wilderness they both passionately wanted to protect. When the two finally met in the late ’60’s they shared much in common and became best friends.

Abbey went on to gain fame as a writer of essays and novels like "Desert Solitaire," "Black Sun," "The Brave Cowboy," and his most famous, "The Monkeywrench Gang," whose characters engaged in industrial sabotage, battling man-made developments that were overtaking the wild. Loeffler says Abbey didn’t just write about eco-shenanigans:

LOEFFLER: He was an activist. He did—we called it "night work."

INGLES: Details of Abbey’s, or Loeffler’s own, night work are purposely scant in the book to protect both his friend and himself. There are some tales of cutting down billboards and hints at disabling land-clearing bulldozers and coal-toting trains and trucks that Abbey saw as the tools of man’s environmental degradation. And there are several references to a recurring Abbey fantasy:

LOEFFLER: His great thought— and this is not something I’m suggesting here— but many’s the time that he considered taking out the Glen Canyon Dam. He saw the Glen Canyon before it filled up and became Lake Powell or Lake Foul, as Ed called it. That led to so many various other dire consequences for the southwest that it was, from his point, pretty hopeless and futile.

INGLES: Abbey called for divine intervention, at one point, on the dam. Loeffler reads from his book:

LOEFFLER: "In 1970 we stood on the bridge that spans the canyon immediately south of Glenn Canyon Dam. ’Are you a praying man, Loeffler?’ ’Not particularly.’ ’Are you willing to join me in prayer?’ ’What prayer?’ ’For an earthquake to shake that dam loose once and for all.’ ’I’ll pray for that,’ I said. Abbey and I got down on our knees and prayed as hard as we could. Ed prayed aloud, while I chanted. After several minutes, we gave it up."

INGLES: Can you still visualize that?

LOEFFLER: Oh yeah, can I ever. There were a lot of people there, including a ranger. They thought we were a couple of nuts. And who knows? Probably we were.

LOEFFLER: The distinction is quite clear and simple.

INGLES: Loeffler reads from one of his interviews with Ed Abbey:

ABBEY: I consider myself almost an absolute egalitarian.

ABBEY: I think that all human beings deserve equal regard or consideration. And I’m saying that that respect should be extended to each living thing on the planet: the mountain lions and the rattlesnakes and the coyotes, and plant life. I think a tree, a shrub, deserves respect, and sympathy as a living thing.

INGLES: Is it still emotional for you to hear his voice again?

LOEFFLER: Well, it’s interesting, Paul, because when I’m hiking, I still hear Ed talking to me when I’m walking down a familiar trail that we’ve both gone through or gone down. Ed was my best friend and fortunately, I’ve got enough of Ed scattered around here that I can refer to it. So to me, he’s dead, but he’s also very much alive.

INGLES: While Loeffler’s book is mostly a celebration of their friendship, he allows Ed Abbey’s contradictions to seep through. Although against over-population, Abbey married five times and had five children. And despite his defense of the environment, in one of the book’s episodes he’s tossing empty beer bottles out the truck window.

LOEFFLER: He, himself, was a human with the human foibles that many of us have and was not a perfect being. But I will say this: he was a man of great honor and he really did pursue the truth. And the truth, as he saw it, was that we’re in deep trouble on this planet and it’s up to all of us to turn that around, if it’s even possible.

INGLES: Jack Loeffler’s "Adventures with Ed: A Portrait of Abbey" is published by the University of New Mexico Press. For Living on Earth I’m Paul Ingles.


"Adventures with Ed: A Portrait of Abbey" published by University of New Mexico Press">