The Bush administration recently revealed its Freedom Car Initiative, with plans to wean cars off of petroleum in the next decade. Host Steve Curwood spoke with David Garman, Assistant Secretary of Energy for Energy Efficiency and Renewable Energy.

CURWOOD: Welcome to Living on Earth. I'm Steve Curwood. We begin our program today with a look at an item from the latest budget proposals from the White House. The president is asking for more than one hundred and fifty million dollars for a new program called The Freedom Car initiative. The aim is to develop affordable fuel cell technology that would replace the internal combustion engine and thus, eliminate the need for fossil fuel to power cars.

Joining me now to talk about the Freedom Car is David Garman. He's the Assistant Secretary of Energy for Energy Efficiency and Renewable Energy. Welcome

GARMAN: Thanks, Steve, good to be here.

CURWOOD: David, the Freedom Car initiative replaces a Clinton administration program called The Partnership for a New Generation of Vehicles. You say yours will be a better approach to creating cleaning cars. How so? 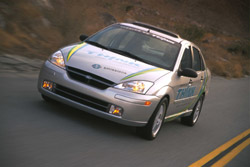 GARMAN: The old Partnership for a New Generation Vehicle Program was trying to design a family sedan that could get eighty miles per gallon. But, of course, this year Americans bought more sport utility vehicles, trucks and mini-vans than they did family sedans. So, we really need to break through some technology barriers and find the kinds of technologies that can be employed in all kinds of vehicles. And most of all, the vehicles that Americans want to buy and drive.

And because we're oriented toward hydrogen fuel cells that frankly don't need petroleum at all, we're really talking about a revolutionary and dramatic step that would free us from our dependence on petroleum. It would free us from admissions. Hydrogen fuel cells don't emit anything, except for water vapor. And, at the same time, it would maintain the ability and the freedom of Americans to buy and drive the kinds of cars they want to buy and drive.

GARMAN: It would. And, in fact, Ford will come out-- in fact, all the major automakers will come out with a hybrid technology in sport utility vehicles beginning in 2003. I have seen and, in fact, crawled all over, the Ford Escape SUV, and there's hopes that it could achieve up to forty miles per gallon.

As for the vehicles that are on the road today, the Toyota Prius, the Honda Insight, and soon, a Honda hybrid Civic model, those are excellent vehicles, too. I actually own a Prius. That's the car that I use and my family. It does a great job for us. But, you know, candidly, it's a small car and not everybody wants a small car. We're still doing a lot of work in hybrids. And Freedom Car includes work on hybrids.

CURWOOD: It does? Can you give me-

CURWOOD: Can you give some details on that, please?

GARMAN: Sure. And, in fact, the president's budget request just came out on Monday. And we're still funding ninety-three percent of the work that we were doing in hybrids., we're continuing.

CURWOOD: One thing about the previous administration's program to get a more efficient car, there was a goal that was, what, eighty miles to the gallon by the year 2004. That hasn't happened. But the Freedom Car program that your administration has announced doesn't have a date, so far, that I've been able to see as a goal. How can you ensure that the improvements and innovations that you're seeking will make it to market?

GARMAN: We have a series of technology goals and milestones. And they're specified and they're quite detailed, and they're quite technical in their orientation for the next decade. And, in fact, what we've done is to incorporate the advice that's been given to us by the National Academy of Sciences when they did their peer reviews of the old program. They told us that a couple of real key things.

Number one, it was inappropriate for the government to be involved in a pre-production prototype with manufacturers. We should be involved in pre-commercial technology. Another thing they told us was that the goals were wrong. Trying to focus on a particular kind of car, a particular platform, the eighty mile per gallon family sedan, was the wrong approach. We should, instead, be focusing on systems and components that can be arrayed in cars, a variety of cars. That's how we'd make a bigger difference in terms of saving petroleum.

CURWOOD: If you were to look back a decade from today, what would you have hoped that the Freedom Car initiative would have accomplished?

GARMAN: A decade from now we will be able to have fuel cell stacks that, instead of lasting three thousand hours the way they-the durability that they have today-- they'd be able to last five or six thousand hours. And instead of costing on the order of three hundred dollars per kilowatt, which is what they'd cost today if we mass produced them, they'd cost more on the order of thirty-five or forty dollars a kilowatt.

If we can do that, we will be in a position to have a fuel cell vehicle that is roughly comparable in price and performance with a kind of vehicle that you can buy today. And we'll still have some very interesting infrastructure problems to overcome. How will a consumer purchase the hydrogen and put it in the car? How will the car store the hydrogen on board? And we have a lot of goals that try to address those things as well.

CURWOOD: I've heard a bit of criticism of your Freedom initiative by some who say, "Oh, these guys are just stalling for time." They don't want to move forward now with corporate average fuel economy standards, so-called CAFE standards, that is the fleet of vehicles , their performance. How do you respond to that kind of criticism?

GARMAN: Increasing CAFE standards can be employed over the short term. And that's perfectly appropriate to consider those things. But, wouldn't it be a tragedy if twenty or thirty years from now we were still arguing about CAFE standards and what regulation we should impose on vehicles. Rather than being working toward the technology that would make that whole discussion unnecessary because we removed automobiles and trucks from the environmental equation altogether. That's what we're going after. It's a dramatic vision, but we think it is within the realm of our grasp.

CURWOOD: David Garman is Assistant Secretary of Energy for Energy Efficiency and Renewable Energy. Thanks for taking this time, David.