(stream/download) as an MP3 file

Mary Kingsley once wrote that there were only two things of which she was particularly proud in her extraordinary, though short, life as an explorer: that her scientific mentor approved of the fish she collected on her travels, and that she learned how to paddle a canoe "pace, style, steering and all" as if she were an African.

As was her style, she was being far too modest. By the time she died at age 38, after having traveled alone through West Africa on and off for seven short years, she had become the century’s foremost authority on the area.

This was no small feat, given the extreme rarity of women traveling in this part of the world. In fact, many of the African tribes she studied and befriended had never seen a white person, let alone glimpsed an unmarried woman by herself. A passage in her book West Africa Studies portrays this fact best. In the book she writes of walking through the forest and encountering a group of men highly bedecked in shells, beads and other ornaments. Assuming they were a secret society (death is often the punishment for an intruder to such gatherings) she turned and fled, but was caught by one of the men. 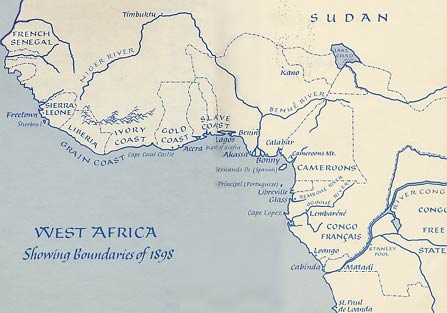 Often alone, Kingsley traveled the length of the coast of West Africa.

They were not, in fact, a secret society, but a party of monkey hunters on a hunt. To catch monkeys they covered themselves in decoration and sat in a clearing, waiting for the curious monkeys to come down out of the trees.

Not bound by secrecy, they did not kill Mary. Instead, they had her sit with them in the clearing. Since they thought she was the "queerest object they had personally ever seen," they assumed the monkeys would react that way, too, and come down to see this strange sight.

This "queer" woman who had no formal education did more, in some ways, for the people of West Africa than anyone had before her. Her two handbooks, Travels in West Africa, and West African Studies, as well as her speeches and lobbying back in England promoted a new understanding and tolerance of these little understood tribes.

Just before her first trip to Africa, Mary had written in a letter to a friend that she was going to Africa to die. Seven years later, her life had changed so dramatically for the better that it is clear she no longer wanted to. But her life ended as she had lived it, tending others. While caring for Boer prisoners of the South African war, she contracted typhoid and died within a few days. Mary Kingsley was buried at sea with full military honors on June 3, 1900.


Back to Women of Discovery