Bruce: Robert Frost wrote the poem "The Road Not Taken" while living in Ripton, Vermont. Well, this week Frost's cabin in Ripton was the starting point for the road taken for hundreds of Vermonters walking toward a clean energy future. Leading the way is naturalist and writer Bill McKibben: 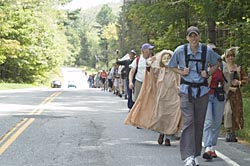 Bill McKibben, in cap, leads the way on the Vermonters Walking Toward a Clean Energy Future march. (Photo: Jon Orlando/Greenpeace)

Bruce: Robert Frost wrote the poem "The Road Not Taken" while living in Ripton, Vermont. Well, this week Frost's cabin in Ripton was the starting point for the road taken for hundreds of Vermonters walking toward a clean energy future. Leading the way is naturalist and writer Bill McKibben. Hi Bill.

Bruce: So, exactly why are you walking? And for four days?

Bill McKibben: We're walking in fact for five days and the reason is because the time has come to take this question of global warming out of the abstract, out of the scientific and finally start doing something about it. We know enough to act, we're not acting therefore we have to find some way to come up with the political will so we're walking across Vermont in the hopes of getting our own legislators to take action and people around the country will start emulating this same idea.

Bruce: So, you started off at Frost's cabin. 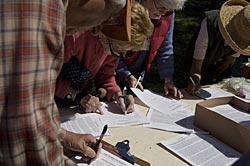 Bill McKibben: We started off this morning at the cold-running water cabin of Robert Frost high in the Green Mountains of Vermont. And as I speak there about 300 people walking down the valley from the mountains, stopping along the sides of the Middlebury River. There was a beautiful scene as we began this morning. One of the sort of deans of environmental and english literature, a man named John Elder, read "A Road Not Taken." That was sort of what was in our heads when we set off down the road.

Bruce: You know, Bill, just this week the Governor of California, Schwarzenegger announced that they were going to take a leadership role and reduce by 25 percent the amount of greenhouse gases in that state.

Bill McKibben: And that was the best single piece of news we heard in a long time. It showed both the possibilities for what we have going on now and the difficulty and problems we're going to have making it a national issue unless we can get Washington involved-----(truck noise) there's a few trucks pass as we walk here--

Without the involvement of the federal government it's going to be extremely difficult for California to keep its promise to do this, as wonderful as it is and it's going to be impossible for smaller states to do anything at all. So we're very hopeful that Schwarzenegger's actions preceed what is coming in the larger sphere. 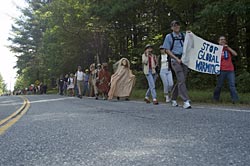 Day One of the 5 day walk on global warming. (Photo: Jon Orlando/Greenpeace)

Bruce: Well Bill, I'm going to let you get back to your walk; you have a bunch of days ahead of you. Have a good hike!

Bill McKibben: Thank you so much Bruce.

Bruce: That's writer and walk organizer Bill McKibben. You can learn more about "The Walk Toward Clean Energy" by clicking on the link on our web page.