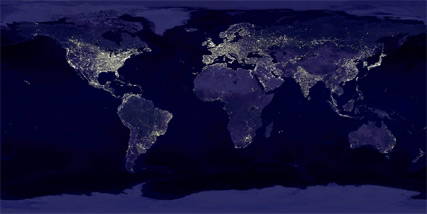 NASA photo of the earth at night.

The Future of Light

A flick of a switch at home can set a handful of lightbulbs aglow. Open the car door, or the refrigerator door, and a light comes on. City streets are illuminated by overhead lights, stores brightly advertise their presence through light. Lighting accounts for twenty percent of all energy use in the US. All this light, however, comes at a cost; producing the electricity creates pollution from power plants and greenhouse gas emissions. Reducing energy needs from lighting even just by half could save billions of dollars and help wean us off our dependence on oil.

Many now see light-emitting diodes, or LEDs, as the potential solution to the problem.

Our current system of light is tremendously inefficient; incandescent bulbs waste 95 percent of the energy flowing through them as heat. Fluorescent bulbs are more efficient, but their harsh color has prevented them from fully penetrating the lighting market.

LEDs are long-lasting, extremely rugged - one scientist tells a tale of dropping one from three stories and then plugging it into a socket – and promise to be ten times more energy efficient than current incandescent lights. In addition, they remain at room temperature, which can cut down energy use even further by reducing air-conditioning that today offsets heat from lights.

Living on Earth reports on the promise of this new technology.
Click here to listen to this story.

LEDs Come to the Developing World

Color LEDs are already taking over the market in traffic lights, automotive tail lights, store signs and other specialty design applications. White LED lights, though, with only six years of research behind them, remain prohibitively expensive for everyday home use in the US. Scientists have not yet created a white LED bulb that is energy-efficient and long-lasting enough to offset the cost of replacing the living-room incandescent.

Already in the developing world, however, these lights hold great promise. Almost 2 billion people have no access to electricity and all the benefits that light provides. A very small amount of light can provide sufficient illumination to read and study at night, or to work at a small business. Fluorescent bulbs, though more efficient than incandescent, become less efficient at the small amounts of light needed in these applications.

Dave Irvine-Halliday, a scientist in Calgary, Canada believes that LEDs provide the answer. At these low-light levels, LEDs are extremely more efficient than either incandescent or fluorescent bulbs, and their long life and hardiness make them ideal for out-of-the-way spots. They are also easy to pair with small renewable power-providers such as solar cells. Irvine-Halliday recently won the Rolex Award for Enterprise for bringing LED light to the developing world through his organization, the Light up the World Foundation. Host Steve Curwood speaks with Irvine-Halliday about his efforts.
Click here to listen to this story.

Thomas Edison invented the lightbulb more than 100 years ago – and so provided the very symbol of innovation. Nothing has been able to truly replace the incandescent in the past century, and the bulb we use today is little changed from the one Edison invented. In an incandescent bulb, energy flows through a filament. The filament becomes so hot it glows. All but about five percent of that electricity, however, is emitted as heat. While the glow is a very pleasant one, it is an inefficient way to create light from electricity.

Scientists first developed fluorescent bulbs in the 1940s, but it wasn’t until they created a standardized, more energy-efficient design in the 1970s that the new form of light started to catch on.

In fluorescent bulbs, energy passes through gas in the bulb. The light emitted is not yet within the visible spectrum, so a chemical coating on the glass transforms the light into visible white light. Fluorescent bulbs are about two to three times as energy efficient as incandescents, but they emit light in a bluer spectrum. Humans are conditioned to appreciate the warmer tones of the sun – more closely mimicked by incandescents. While fluorescent bulbs have become commonplace in offices and public spaces, they haven’t taken over in retail venues where color matters, such as clothing stores, and in our homes.

LEDs are more closely related to computer technology than they are to traditional forms of lighting, as an LED is basically a semi-conductor. When energy passes through two electron-charged materials, electrons jump from one material to the other. As an electron jumps, it emits energy in the form of a photon. The color of light created by a given LED depends on the amount of energy in that photon. This, in turn, depends on the material used for the layers.

Scientists first discovered LEDs more than 30 years ago, but they didn’t expect the small points of light to ever serve as anything more than an indicator light. Continuing research, however, has shown that LEDs can be made extremely bright and energy efficient. Color LEDs have already over the market in applications such as traffic lights; because of the efficiency and long-lasting nature of the technology, municipalities can make up the cost difference within only a year.

White light eluded scientists, though, because they needed to create an LED that would emit blue light to be able to create white. It wasn’t until a Japanese scientist discovered that the material gallium nitride could be used to create a blue LED that researchers were finally able to create white light. White LEDs can be made two ways: either by combing red, green and blue LEDs, which then makes white; or by using a chemical layer similar to that in a fluorescent bulb that converts the blue to white. In the past six years, white LEDs have quickly made tremendous gains in energy efficiency, brightness, and lifespan. Scientists predict it is not unrealistic to expect that white LEDs could begin to take over even the residential market for lighting within only the next ten to fifteen years. At the moment, though, architects and lighting designers are among the only ones in the US to be able to easily purchase white LEDs for specialty lighting needs.