Field Note: Get the Lead Out! 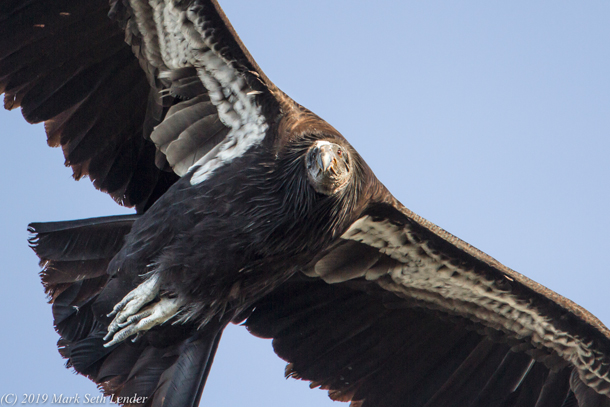 A condor comes by for a closer look. (Photo: Mark Seth Lender)

Living on Earth’s Explorer in Residence Mark Seth Lender muses on an encounter with one of Earth’s most impressive birds: the California Condor.

The bald head of a California condor (for the sake of cleanliness they have no head feathers) is hot to the touch. Their body temperature runs 104 to 105 degrees Fahrenheit. Despite the high temperature the birds have a relatively low basal metabolic rate. They can survive long periods of starvation, and they are very long-lived. At least 45 years in the wild, maybe longer. This, if they do not succumb to lead poisoning.

Virtually all lead bullets are now alloyed with antimony, causing fragmentation on impact – this a WWII combat innovation. Generally speaking, under battle conditions, no one ate their targets. But both human hunters and condors are now eating fragmented lead left respectively, in the flesh of a kill hunters pack up and take home, and in the entrails and organs hunters leave behind. Animals shot and wounded who get away and go off to die (which happens more often than people care to admit) also become carrion readily accessible to condors, and other animals too. There is evidence that lead fragments cause brain damage in humans, especially to children. Lead kills condors outright. It was a major cause of their decline and, along with habitat loss, the greatest difficulty they now face in the wild. Condor rehabilitation centers, such as the one run by the US Fish and Wildlife Service at Hopper Mountain, are constantly chelating condors for lead poisoning.

Copper ammunition (which though slightly different from lead has excellent ballistics) would eventually eliminate the problem for condors and humans alike, but the NRA is against it.

The first time I saw condors there were seven in formation, the sound of air passing over their wings reminiscent of air whooshing over the wings of a glider. Not something you readily forget. But in addition, and as they have done every time I’ve seen them since, they drifted over to look at me, their wings still, their dark-bright eyes meeting mine. It will be terrible if they are lost to the fabric of Life on Earth.