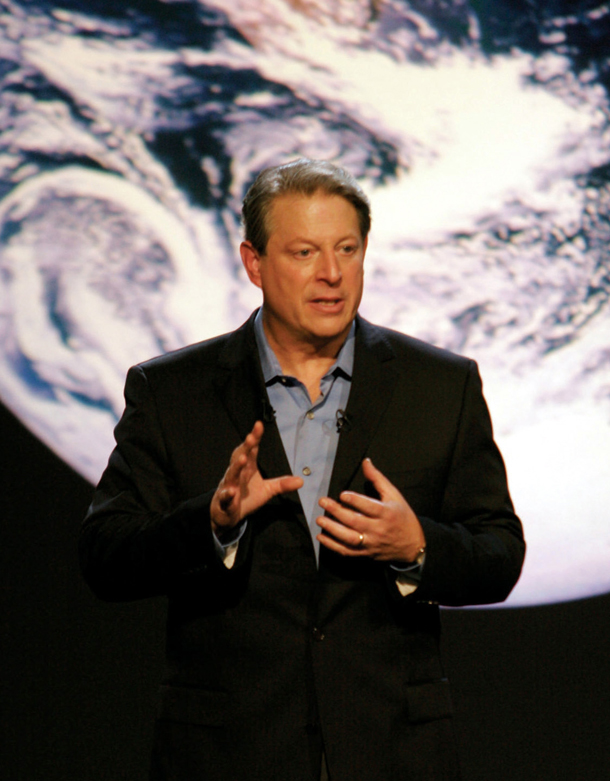 In launch of new climate communication project, Gore’s top lieutenant declares him a “prophet.” Raising the question: is this an effective way to communicate about climate change?

I recently interviewed Maggie Fox, President and CEO of the Climate Reality Project , Vice President Al Gore’s newest attempt to get across an effective message about climate change.

Climate Reality’s main event is a 24-hour, live-streamed global event on Sept. 14-15. From locations in each time zone around the world people will share how climate change is affecting them and their communities. Fox said the event will emphasize extreme weather events and their connection to climate change. The campaign promises to be edgy. Fox said they’ve hired Alex Bogusky, creator of the Truth Campaign against smoking, as “chief creative officer.”

I know the Vice President and his crew take things like “messaging” and “framing” very seriously, so I was interested in their use of language and choice of the term “reality.”
“We thought long and hard about, ‘what is the one overarching frame for the climate challenge that would encompass all aspects.’ There has never been a narrative in the community that could encompass all of it. We believe ‘reality’ does that,” Fox said.

It was because of that careful and considered use of language that I found the following exchange interesting and a bit puzzling. I pressed Fox on whether Mr. Gore is perhaps unwittingly contributing to the political divide we see in polling on public attitudes toward climate change. Fox told me, no, that’s not a problem because Mr. Gore is a prophet. Really. Here’s the exchange:

JEFF YOUNG: Is it possible that the Vice President, for all the energy he’s put into this issue, is not really the best messenger? Several people have pointed out that he is, to many people, a polarizing political figure. And part of what you see when you look at polling on climate change is there is this political, polarizing effect. Is it possible he’s contributing to this just because he’s prominent on this issue and many people perceive him as a polarizing figure?

MAGGIE FOX “Well, I actually don’t agree with that premise. I think the notion of Vice President Gore as a divisive figure is a bit of a hoax, just like the people who are denying climate change. It’s a pre-frame, it’s a fabrication that suits those who want to keep the status quo. So if you have a prophet, if you have someone who has woken up to a particular challenge in the world and that person speaks, if that disrupts things, who is going to be and what are the voices going to be that say that person doesn’t have credibility? Those voices that don’t want that change… There are so many more voices clamoring to hear what he has to say that his right to speak and need to speak is more than made clear virtually every day.

YOUNG: Did you just refer to him as a prophet?

FOX: “I think he is a prophet on climate change. I think he woke up to this issue in his earliest years, expected as other people learned about it that they would also wake up to its significance ... His presumption as a young man was that once you heard the information the world would shift and start getting its act together, and that hasn’t happened. So I do think that along with many climate scientists he has been a voice speaking about this for over thirty-some years.

Now, sure, part of Fox’s job is to advance her boss’s image. But, “prophet”?
Informally, “prophet” can mean “an especially effective spokesperson for a cause.” But it’s a pretty loaded term. The top definitions listed in most dictionaries carry biblical or religious meaning: “A person who speaks for God, or by divine inspiration,” or “One who utters divinely inspired revelations.” That sort of thing.

Call me a heretic, but I’m not sure that assuming the role of “final authoritative revealer of God’s will” is necessarily the best way to communicate climate science.
Reality? Check, please.